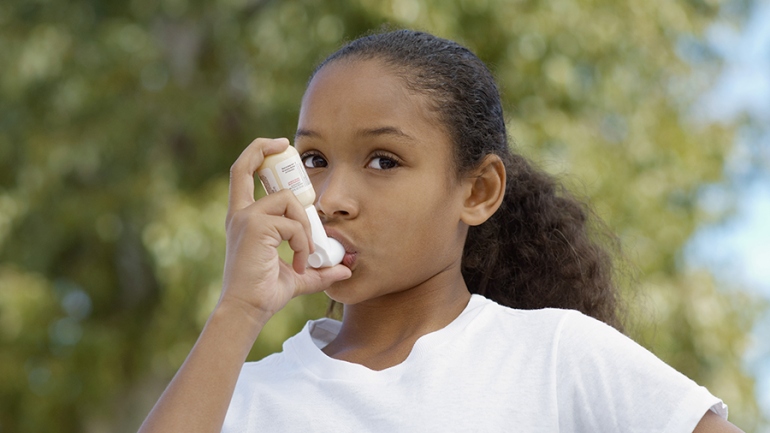 A particular pattern of microbes living in a baby’s gut during its first month of life may directly impact the developing immune system, leading to a higher risk of allergies and asthma later in childhood, according to a study by researchers at UC San Francisco and the Henry Ford Health System in Detroit. The findings highlight the importance of developing early interventions to improve microbial health in young infants.

The new paper, published September 12, 2016 in Nature Medicine, shows that the gut microbes present in some one-month-old infants predict a three-fold higher risk of developing allergic reactions by age two and asthma by age four. The paper demonstrates that the perturbed microbial ecosystem present in these at-risk babies produces molecules that reduce the abundance of a key type of immune cell known to help prevent allergy. The researchers surmise that having fewer of these cells leads to a hyperactive immune system and eventually to chronic asthmatic inflammation of the lungs.

Co-senior author Susan Lynch, PhD, a UCSF associate professor of medicine, says she believes the discovery represents an opportunity to develop new treatments that could stave off allergies and asthma before they become established.

“If we are to prevent disease development, we need to intervene early,” Lynch said. “Currently, children are typically six or seven years old when they are diagnosed with asthma, which has no cure and has to be managed through medication. But if the genesis of the disease is visible as a disruption of gut microbiota in the very earliest stages of postnatal life, it raises an exciting question: could we reengineer the community of microbes in at-risk infants to prevent allergic asthma from developing?”

Numerous studies in recent years have tied early exposure to beneficial microbes in the environment to a host of positive health effects. Breast-feeding, vaginal births (as opposed to C-sections) and even having dogs in the household during the first year of life are all associated with protective effects against allergies and asthma. Recently, researchers at the University of British Columbia reported that three-month-old infants with low levels of four key types of gut bacteria were significantly more likely to show early warning signs of asthma at their first birthdays than infants with normal levels of these bugs.

“We have been working for over a decade, trying to figure out why some children get asthma and allergies and some don’t,” said co-senior author Christine Cole Johnson, PhD, MPH, who is chair of public health sciences in the Henry Ford Health System. “It seems that the microbial communities within the body could be the keystone to understanding this and a number of different immune diseases.”

Since 2003, Johnson’s lab has been tracking a variety of early life risk factors for asthma in a racially and socio-economically diverse population of infants born in and around Detroit. In this study – the Wayne County Health, Environment, Allergy and Asthma Longitudinal Study (WHEALS) – Henry Ford researchers conducted repeated follow-up appointments during the first year of life, then tested the infants for allergies at the age of two[1]and for asthma around their fourth birthdays.

As part of this study, Johnson’s team collected stool samples from the diapers of the infants and kept them on ice. Years later, Johnson connected with Lynch, whose lab specializes in human microbiome research, and the two researchers teamed up to discover how soon after birth they could detect microbiome differences predictive of asthma later in life, and why these microbes were so influential in triggering the disease.

“We went back to the freezers and pulled out the stool samples and shipped them over to UCSF, where the Lynch lab was able to use new genetic technology to examine them for the entire microbial community that had been there in these infants,” Johnson said. “Technology has really changed – you couldn’t have done that 10 years ago.”

Lynch and her team used high-throughput genetic analysis of the stool samples to map the gut microbes of 130 young infants around one-month of age – so-called neonates. This analysis, which was the first study of both bacterial and fungal diversity in the neonatal gut, found that the babies fell into one of three distinct groups, each characterized by different types of bacterial and fungal species in the gut.

Based on the Henry Ford team’s two-year and four-year follow-up data, the smallest of these three groups (11 of 130 infants) were three times more likely to develop atopy and asthma than the rest of the infants. The size of this at-risk group was strikingly consistent with the rate of allergic asthma in the general population, Lynch said, and the microbial diversity analysis showed that these infants were missing certain normal gut bacteria and also that they possessed abnormally high levels of certain resident fungal species.[2]

To learn how the abnormal complement of gut microbes in these high-risk infants might cause the hypersensitive immune reactions that characterize atopy and asthma, the UCSF team studied the microbes’ metabolic byproducts – molecules in the stool samples that could offer clues about what these microbes had been up to in the gut.

They discovered that the guts of neonates with healthy microbiomes contained a wide range of molecules that can reduce inflammation. These include a set of fat molecules, or lipids, that the researchers suspect nourish immune cells called T-regulatory cells, whose job is to keep the rest of the immune system in check.

In contrast, these key anti-inflammatory lipids were absent in the guts of at-risk babies. Instead, the researchers detected different fats, including one associated with asthma in adults, called “12, 13 DIHOME.” Further experiments found that even healthy, adult immune cells became hyper-sensitized after being exposed to just the byproducts of the at-risk babies’ gut microbiomes, and that 12, 13 DIHOME in particular could reduce the number of T-regulatory cells.

The researchers suspect that gut microbes play a key role in processing dietary components such as fats, giving them a powerful influence over whether anti-inflammatory or pro-inflammatory molecules end up in the gut.

“Asthma has doubled in prevalence in modern “westernized” societies about every 20 years for the past 60 or 70 years, so an effective strategy for prevention is becoming an urgent need for public health,” added Homer Boushey, MD, a professor of medicine at UCSF, and member of the research team. The new paper is among the first to go beyond simply cataloging differences in microbes between children who do or do not go on to develop asthma, he said: “By focusing on the differences in microbial functions – in their metabolic products and their effects on immune function – this kind of study helps define the pathway we’ll need to follow to prevent this disease.”

The researchers also examined a number of environmental and socioeconomic factors to learn why some children developed a high-risk gut microbiome profile, but only found a couple strong links: namely that male infants were more likely to have the problem than females, and also that those who didn’t have dogs in the home were also more at risk, in line with the authors earlier findings.

“Humans have co-evolved with microbes and as a result we rely on their genomes for certain critical functions. We believe this is particularly true during the earliest stages of human development,” Lynch said. “But lifestyles have changed dramatically over the past several decades: We’ve significantly reduced our exposure to these environmental microbes our bodies rely on. Having a dog track the external environment into the home may be just one way to improve the breadth of microbes babies are exposed to in very early life.”

Lynch and Johnson’s groups also published a second paper in the journal Scientific Reports on Aug. 31, 2016, detailing for the first time how numerous socioeconomic, environmental and demographic factors intersect to influence microbiome composition in the WHEALS children, without reference to particular disease risk factors. The researchers hope the findings of these two papers will spur development of tests to detect signs of an unhealthy gut microbiome in infants and to implement early-life interventions to shift microbial ecosystems toward a healthier state.

The research was supported by the National Institutes of Health and National Institute of Allergy and Infectious Diseases (P01 AI089473–01) and the Alfred P. Sloan Foundation. The authors declare no competing financial interests.

[1] Johnson and colleagues recently developed a new definition for “high risk” atopy that is much more predictive of later asthma than previous tests, which looked for hypersensitive immune responses to any one of a panel of common allergens (peanuts, pollen, animal dander, etc). Statistical work by Johnson’s group showed that this definition of atopy was only very weakly linked to children’s future asthma risk. Instead, the team found that two year olds with heightened immune responses to multiple different allergens, even at relatively low levels, had a five-fold increased risk of developing asthma later in childhood. It is this early-life “multiple sensitivity” test that was used to assess atopy in the current study.

[2] Henry Ford's finding complements a 2014 study by Lynch, Bouchey, and colleagues showing that children who live in homes where the house dust contains fewer bacterial species and more fungi are at higher risk of developing asthma.

About HFHS: Henry Ford Health System (HFHS) is a Michigan not-for-profit corporation governed by a 22-member Board of Trustees. Its advisory and affiliate boards comprising more than 100 Trustee volunteer leaders provide vital links to the communities HFHS serves. Nancy M. Schlichting is the chief executive officer. As one of the nation’s leading comprehensive, integrated health systems, HFHS provide health insurance and health care delivery, including acute, specialty, primary and preventive care services backed by excellence in research and education. Founded in 1915 by auto pioneer Henry Ford, HFHS is committed to improving the health and well-being of a diverse community.