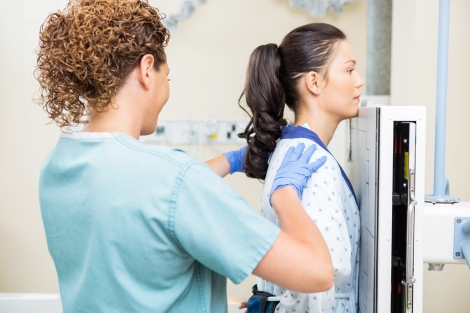 The ideal interval for breast cancer screening depends on combined assessments of each woman’s breast cancer risk and her breast density, according to a new study led by UC San Francisco and University of Wisconsin (UW) researchers. The research team, members of two nationwide breast cancer research networks, found that women at high risk who also have dense breast tissue may benefit from annual screenings – more frequent than current guidelines, which call for mammograms every two years – while women at average risk with low breast density would be best served by screenings every three years. Women with average risk and high breast density would do equally well with screenings every two or three years.

As reported in the Aug. 23, 2016, issue of Annals of Internal Medicine, researchers in the Breast Cancer Surveillance Consortium (BCSC) and the Cancer Intervention and Surveillance Modeling Network (CISNET) collaborated on the new study, which used population-based breast cancer screening information incorporated into computer models to predict long-term health outcomes based on different screening intervals.

Using population-based data gathered by the BCSC, the researchers modeled health outcomes for women aged 50 to 74 under regimens calling for screening every one, two or three years. They then combined results from three different microsimulation models, developed by CISNET, to determine optimal screening intervals. The models were calibrated to current breast cancer screening, incidence, and treatment in the United States. “These models are very applicable to the populations we screen,” Kerlikowske said.

“Our goal was to help provide evidence so women and their providers can weigh the benefits of screening with their personal risk and preferences,” Trentham-Deitz said. Specifically, the researchers looked for a balance between averting cancer deaths and minimizing unintended harm that can result from screening. Frequent screening can identify more potentially cancerous lesions, but can also lead to false-positive diagnoses and unnecessary biopsies or radiation exposure. “Some lesions detected in screening will never grow to become clinically significant and will not impact a woman’s life,” Kerlikowske explained.

In the study, women were separated into subcategories based on four levels each of individual risk and breast density. For women with average risk and low breast density, the models showed that there was no difference in deaths averted from breast cancer whether they were screened every two years, which is the current standard of care, or every three years. However, screening every three years reduced potential harms.

But women with both high risk and dense breasts benefitted most from annual screenings, which is more frequent than the current standard of care. “This important high-risk/high-breast-density group is very small, however, comprising less than one percent of all women aged 50 to 74 years,” Kerlikowske said.

Kerlikowske points out that tailoring screening intervals is already practiced in a number of European countries, including Sweden, the Netherlands and Spain. A Spanish study, similar to the BCSC modeling, found that implementing a general three-year screening interval, with yearly screening for high-risk women, reduced overdiagnosis and caught more missed cancers.

To assist women and their providers in determining breast cancer risk, the BCSC has developed a risk calculator, which is the only calculator that also incorporates a clinical measure of breast density – a key screening determinant in this study.

Principal investigators for the three modeling teams include Harry de Koning MD, PhD, of Erasmus University Medical Center, in the Netherlands; Mandelblatt and Clyde Schechter, MD, of Albert Einstein College of Medicine; and Trentham-Dietz, Oguzhan Alagoz, PhD, and Natasha Stout, PhD, of Harvard Pilgrim Health Care. A full list of authors is available in the paper.

Funding for the research was provided by the National Cancer Institute.