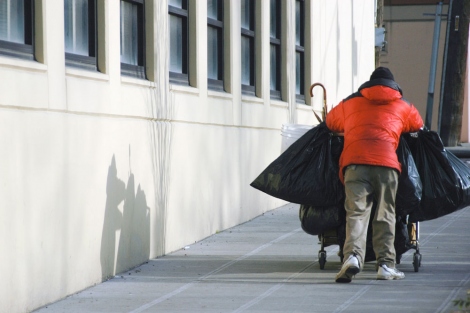 A new UC San Francisco report on an understudied population – older homeless adults – reveals that adverse childhood experiences have long-lasting effects. The researchers found that childhood adversities, such as abuse, neglect and parental death, have a strong association with mental health outcomes in a group of 350 homeless adults over the age of 50 in Oakland, Calif. The results indicate that early life challenges have a persistent ripple effect, even in an already challenged population.

“One might think that with all the negative experiences in the lives of these individuals, events that happened fifty years ago would not drive mental health outcomes, but they do," said UCSF’s Margot Kushel, MD, professor of medicine and senior author on the study, published in the American Journal of Geriatric Psychiatry on Aug. 17, 2016.

The younger half of the baby boomer generation has had a consistently higher risk of homelessness, leading to half of all single homeless adults being over 50, Kushel said. In previous work, Kushel has shown that this growing population experiences health challenges common in non-homeless adults who are decades older, but little is known about how early life experiences shape this group’s mental health.

“There is a lot of literature about childhood adversity and psychiatric outcomes, but few studies on older people, and no stories at all on older homeless adults,” said the study’s lead author, Chuan Mei Lee, MD, clinical fellow in Psychiatry at UCSF.

The study participants were part of a longitudinal research project known as the HOPE HOME (Health Outcomes of People Experiencing Homelessness in Older Middle Age) Study, which has been conducted by UCSF since 2013. Individuals have been recruited for the HOPE HOME study at shelters, meal programs, and recycling centers throughout the city of Oakland. The new research was based on data gathered during baseline interviews.

The researchers queried study participants on seven categories of negative childhood events: physical neglect, verbal abuse, physical abuse, sexual abuse, parental death, parental incarceration and placement in the child welfare system. The total number of childhood adversities experienced by each participant was then compared to his or her current depressive symptoms and self-reported history of suicide attempts and psychiatric hospitalizations.

The odds that participants had any of these three poor mental health outcomes was related to the number of childhood adversities they had experienced.

“Even in a population with high prevalence of poor mental health outcomes, you could differentiate the mental health problems at this late age by the number of childhood adversities,” Kushel said.

Compared to respondents with no reported adversities, those who experienced one to four or more had two to six times greater odds of having present-day moderate to severe depressive symptoms. Similarly, those with four or more adversities had seven times higher odds of having been hospitalized in the past for psychiatric symptoms. The greatest elevation in risk was in relation to childhood adversity and suicide attempts: those with four or more adversities had 45 times the odds of an attempted suicide at some point in their lives.

“I was humbled by what a potent risk factor childhood adversity was. These childhood events still haunt these individuals and loom very large in their lives,” Kushel said.

Parental death showed the largest gap between study participants and the general public. Nationally, 0.3 percent of children experience the death of a parent, as compared to 21 percent of the respondents. Kushel suggests that the racial makeup of the study group, which was 80 percent African-American, may underlie this difference. “African-Americans dying at younger ages creates this disparity and leads to intergenerational negative effects,” Kushel said.

Due to the strong relationship between childhood adversity and mental health outcomes, the researchers suggest healthcare providers screen for early life adversities. Though lagging behind the general population, half of those surveyed have a primary care provider and 70 percent had received care from a non-emergency department source in the past six months, which represent opportunities to screen for childhood adversity, Kushel and Lee said.

The researchers emphasize that the study’s results are not simply a reflection of “bad” parenting. Kushel pointed to the intergenerational transmission of traumas, which in turn are highly influenced by larger societal issues. “Because its effects are so wide, childhood adversity is really an issue of public health” Lee said.