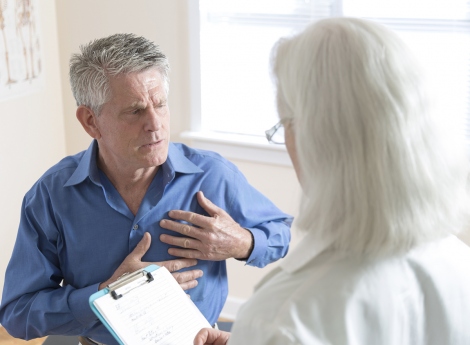 Chest pain is one of the most common reasons to visit the emergency room, but a new UC San Francisco study shows that only a fraction of all cases actually lead to a diagnosis of a life-threatening condition.

As a result, the researchers suggest that significant diagnostic testing may not be warranted in a general population where the overall risk is low.

The study will be published June 13, 2016, in JAMA Internal Medicine.

The research involved a probability analysis that examined emergency department visits in the United States by adults over a seven-year span where the chief concern was non-traumatic chest pain. It found that only 5.5 percent of those visits led to serious diagnoses, such as heart attacks.

Chest pain is the second most frequent cause of emergency department visits among adults, amounting to more than 8 million visits annually nationwide.

“Because chest pain is a characteristic of several life-threatening conditions and the risks of missing these diagnoses are high, clinicians may overestimate the probability of these conditions,” said lead author, Renee Hsia, MD, MSc, a professor of emergency medicine and health policy at UCSF.

“As a result, it’s important to establish accurate pre-test probabilities and determine the need for further testing, in addition to findings from physical examinations, laboratory results, and other testing.”

The study analyzed 10,907 patient records, which represented 42 million patient visits to an emergency department with a primary symptom of chest pain. The analysis included all ER visits from Jan. 1, 2005, to Dec. 31, 2011, for adults 18 years and older.

The most common diagnosis was nonspecific chest pain (51.7 percent). When stratified by age group, the prevalence of serious diagnoses increased with age.

Diagnoses related to chest pain that are traditionally taught to medical students as life-threatening conditions include acute coronary syndrome, aortic dissection, pulmonary embolism, esophageal rupture, and perforated peptic ulcer. The researchers found that when examining each of these conditions independently, 5.1 percent were for acute coronary syndrome, and all the rest totaled less than 0.4 percent of cases.

The findings suggest that “significant diagnostic testing to rule out these diagnoses may not be warranted in a general population of undifferentiated patients,” the authors wrote. They concluded that as health care cost pressures mount, improving diagnostic accuracy is increasingly important to limit wasteful tests and improve patient outcomes.

Co-authors are Zachariah Hale, a medical student at the UCSF School of Medicine; and Jeffrey Tabas, MD, a professor of emergency medicine at UCSF.