Alexander Berbey was ready for the 2014 fall football season. Or so he thought.

“I had been working on my endurance for a few months so that I would be prepared for the hard football practices,” said the 17-year-old junior at Stuart Hall High School (SHHS) in San Francisco. “Frankly, I was just really excited to play.”

But first, Berbey needed a spring physical, so he went to the PlaySafe program in UC San Francisco's Department of Orthopaedic Surgery.

PlaySafe provides free physicals in the spring and fall for high school student-athletes through an interdisciplinary team of UCSF Sports Medicine Center physicians, orthopaedic surgeons and athletic trainers at the Orthopaedic Institute on the UCSF Mission Bay campus. These wellness checks can find underlying medical abnormalities and even help prevent sudden death.

The spring PlaySafe physicals include a cardiac screening with electrocardiography (EKG), an electronic tracing that can detect abnormalities in heart shape and/or size, as well as cardiac tissue damage.

“Keeping young athletes safe during sports should always be our first intention,” said Anthony Luke, MD, director of primary care sports medicine at UCSF Health and PlaySafe program director. “Some conditions, like heart problems, are hard to identify, so doing what we can to help athletes excel and be healthy is paramount. It’s important that families make sure kids get a good physical examination by their physician.”

For Berbey, of San Rafael, his PlaySafe physical in May 2014 could have been a lifesaver.

His EKG results led to a diagnosis of Wolff Parkinson White Syndrome, a birth defect in which the heart has an abnormal extra electrical pathway. One of the most common causes of fast heart rate disorders in infants and children, it sometimes can develop into ventricular fibrillation, which is fatal unless treated immediately.

Berbey’s parents, Rhoda and David, initially were stunned with the diagnosis. But they also were grateful PlaySafe detected the disorder in advance of something catastrophic, even fatal. 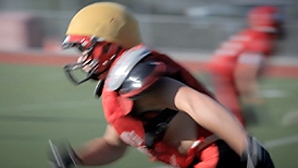 This outreach program of the UCSF Sports Medicine Center provides sports medicine care for student-athletes in the high schools around the Bay Area.

“We will always be thankful to SHHS and UCSF for offering the PlaySafe program to the SHHS athletes,” said Rhoda, noting the family has no history of heart problems. “Even the most responsible parents are sometimes unaware of the more unique opportunities to keep their kids safer. The test was really a lifesaver.”

Following his physical, Berbey was directed to Akash Patel, MD, assistant professor of pediatric cardiology at UCSF. In late August 2014, he underwent an electrophysiology study (EPS), which tests the heart’s electrical activity to locate where the arrhythmia is coming from and helps determine treatment options.

The extra electrical pathway was found on the left side of Berbey’s heart. To correct the disorder, a cardiac ablation was performed. In the minimally invasive procedure, thin, flexible wires called catheters are inserted into a vein and threaded into the heart. The tip of the catheter either delivers heat or extreme cold to destroy tissue responsible for the initiation and/or perpetuation of the abnormal heart rhythm.

“I was surprised, but I should have seen the signs,” Berbey said. “Sometimes during practice, we would be running hills, then my heart would start pounding and wouldn’t stop for a long time. At first, I thought I was simply out of shape, so I continued to train harder. I did not know it actually was a heart condition.”

Berbey, a member of the high school wrestling team, hasn’t punted on football. Playing for three seasons as a starter and backup defensive tackle and kicker, he’s ready for the upcoming season with his Knights teammates.

Thousands of Student-Athletes Screened Through Program

Also on the high school varsity track-and-field team in discus and shot put, Berbey did not attend this year’s PlaySafe cardiac physicals due to a meet the same day. However, he recently was given a clean bill of health by his cardiologist and plans to have a standard checkup from his doctor before next football season.

Since its inception in 2009, PlaySafe has screened more than 2,450 student-athletes from nearly 20 public and private high schools in San Francisco, the East Bay and the Peninsula. It also has an outreach component with 12 athletic trainers and 10 physicians who work with high school programs throughout the year.

At this year’s spring PlaySafe physicals on May 21, 500 student-athletes in San Francisco, Redwood, Sir Francis Drake and Tamalpais high schools who are participating in a California Interscholastic Federation (CIF) sport were evaluated.

“I think every kid should be tested or at least be given the chance to be tested, as even Alex’s pediatrician admitted that he never would have caught his condition with regular annual check-ups,” Rhoda said. “Not only is it a lifesaving tool for targeted cardiac problems, but it also could be a gateway to discovering tangential health problems that may improve quality of lives of kids and future adults.”