Dean Sheppard, MD, has been selected as the recipient of the sixth annual Faculty Research Lecture in Translational Science, sponsored by UC San Francisco's Academic Senate.

Sheppard delivered his lecture, titled “Integrins as therapeutic targets: An ode to reductionism,” on May 19 in Byers Auditorium at the Mission Bay Campus.

Sheppard is professor of Medicine and Chief of the Division of Pulmonary, Critical Care, Allergy and Sleep as well as director of the Lung Biology Center. A world leader in integrin biology and pulmonary sciences translated to disease, Sheppard has had a career spanning clinical studies and basic science.

Sheppard initiated his research career in clinical studies on the effects of air pollutants and occupational chemicals on lung function.  Specifically, he showed that short-term exposure of asthmatics to relatively low concentrations of sulfur dioxide cause marked and symptomatic bronchoconstriction. 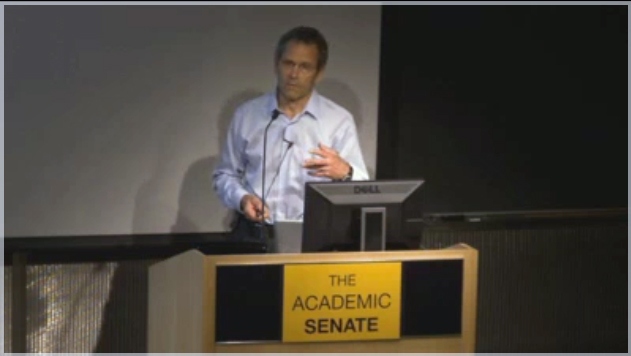 Sheppard soon embraced basic science oriented investigations of lung disease.  His most notable contributions are in the area of integrin biology. His research has identified the three proteins involved in integrin pathways that play a central role in pulmonary, hepatic and rental fibrosis, acute lung injury, protection of pulmonary emphysema, and tumor invasion.

Sheppard’s research demonstrates how discoveries in basic science can lead to important discoveries with relevance to multiple organs and a more fundamental understanding of the pathogenesis of disease development.  One aim of his research is to identify new therapeutic targets to ultimately improve the treatment of pulmonary fibrosis, asthma, and acute lung injury.

See a list of the past recipients of the Faculty Research Lectureship – Translational Science award.