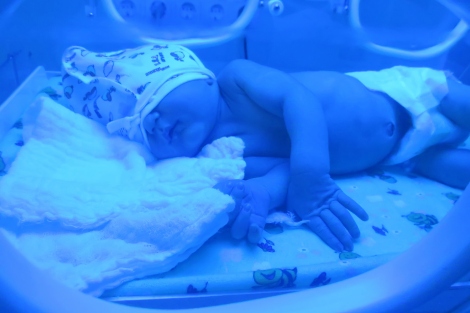 Phototherapy, increasingly used to treat jaundiced infants, could very slightly raise the risk of pediatric cancers, particularly myeloid leukemia, according to epidemiological research published online on May 23 in Pediatrics.

At very high levels, bilirubin, a byproduct of the normal breakdown of old red blood cells, turns the skin and whites of the eyes yellow and can get into the brain, where it can cause cerebral palsy and hearing loss. Infants are susceptible to this condition, and in recent years, doctors have been treating it more aggressively with blue light therapy, which changes the shape of the bilirubin molecule and allows it to be excreted more easily.

But the association these new epidemiological studies found between phototherapy and cancer suggests the benefits should be balanced against the possible risk, especially for babies with Down syndrome, who are at elevated risk for cancer.

The slight increased risk of cancer was found in one study but only partly confirmed in the other. But the authors said it was enough to warrant at least a little more caution in using phototherapy. For babies born with Down syndrome, the potential risk due to phototherapy is greater, because they start out with a 10-fold higher risk of cancer, particularly leukemia, even if they do not get phototherapy.

“A lot of phototherapy is being given to babies whose bilirubin never reached the level recommended for treatment,” said Thomas Newman, MD, MPH, an author of both studies and a professor of epidemiology and biostatistics and pediatrics at UC San Francisco. “Phototherapy is being given to babies just in case, to prevent readmission later. Although the risk of cancer is small – no more than one in 1,000 for most babies – and still must be regarded as uncertain, it is probably prudent to save phototherapy for the babies who most need it.”

The blue light used in phototherapy, which is close to ultraviolet light on the spectrum, causes DNA damage and some scientists have long suspected it may be carcinogenic. Previous studies on phototherapy have had mixed results. The researchers said that could be because the cancer risk in babies is so low to begin with that the effects of phototherapy are only apparent when enough newborns are followed.

Among the Largest Studies to Date

Both datasets showed an association between phototherapy and some cancers – myeloid leukemia in both cases, liver cancer in the Kaiser study and kidney cancer in the statewide dataset. The Kaiser study, which included data on more factors that might lead to both phototherapy and cancer, found that most associations were no longer statistically significant after the researchers adjusted for these variables. However, there was an association with myeloid leukemia for babies who received higher doses of phototherapy, and this association persisted after the researchers adjusted for potentially confounding factors. The authors cautioned this result was based on only two babies who were treated twice or more with phototherapy.

“Health care providers should look at phototherapy the way they do other treatments, as having both benefits and potential risks,” said Andrea Wickremasinghe, MD, of Kaiser Permanente Santa Clara, lead author of the California study. “We should probably be more cautious about giving phototherapy, particularly to babies with Down syndrome and babies with bilirubin levels that are below the thresholds recommended for treatment. On the other hand, we would not want excessive concern about this low and uncertain cancer risk to frighten people away from phototherapy when it is needed.”

Other authors of the papers include Michael Kuzniewicz, MD, MPH, of UCSF and Kaiser Permanente Northern California Division of Research; Barbara Grimes, PhD, and Charles McCulloch, PhD, of UCSF; and Eileen Walsh, RN, MPH, of Kaiser.

The Agency for Healthcare Research and Quality (grant number R01HS020618), the Gerber Foundation and the American Academy of Pediatrics provided funding for this research. Statistical analysis was partially supported by the National Center for Advancing Translational Sciences, National Institutes of Health, through UCSF-CTSI (grant number UL1 TR000004).