For the third year in a row, UC San Francisco’s four schools — of Dentistry, Medicine, Nursing and Pharmacy — topped the nation in federal biomedical research funding in their fields, according to annual figures from the National Institutes of Health (NIH)*. In addition, the University as a whole received the most NIH funds of any public university, and second most overall. The figures are for fiscal year 2015.

Overall, UCSF received more than $560 million in contracts and grants awarded to researchers in the four schools and UCSF’s Graduate Division. These highly competitive funds enable UCSF scientists to advance understanding of the fundamental biological causes of cancer, cardiovascular disease, diabetes, HIV, Parkinson’s and Alzheimer’s disease, among many other conditions, and work to develop improved therapies for patients.

“It is a tribute to our world-class faculty that all four of our schools continue to lead their fields in these competitive grants, which are the lifeblood of research at universities nationwide,” said UCSF Chancellor Sam Hawgood, MBBS. “These funds empower our faculty, staff, students and trainees to be transformative leaders in their fields, driven by their curiosity to reveal new insights about the fundamental secrets of biology and their passion for applying those basic discoveries to advancing patient care.”

The UCSF School of Medicine topped the list of NIH funding for medical schools for the fourth year in a row, at $501.1 million, supporting research, graduate student training and fellowships for postdoctoral scholars.

The UCSF schools of Pharmacy, Dentistry and Nursing also ranked first in their fields in NIH grants for 2015: Pharmacy for the 36th consecutive year, with $27.0 million in grants; Dentistry for the 24th year, with $16.9 million; and Nursing for the 10th time in the last dozen years, with $14.0 million. 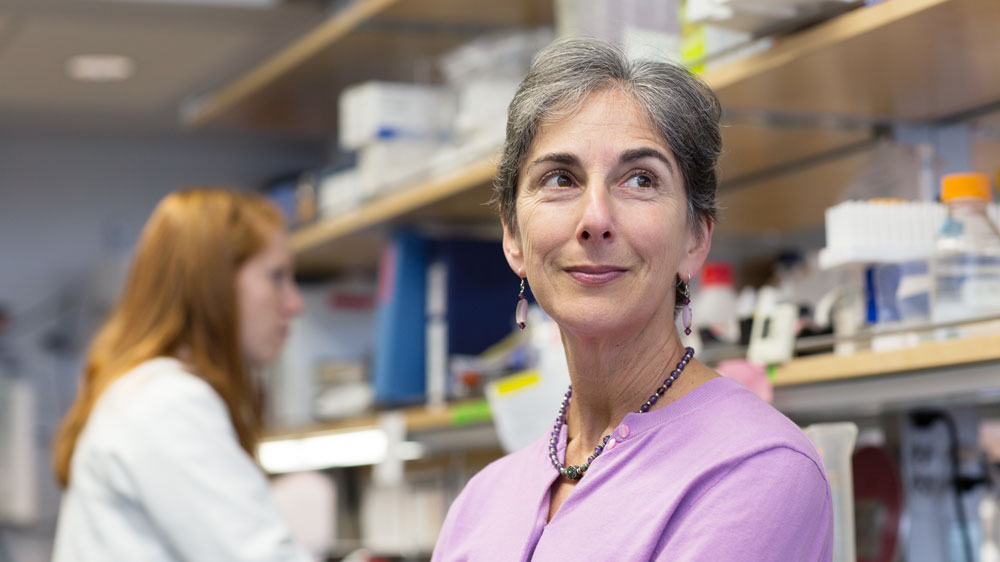 Learn about some of the UCSF researchers who received the most funding and how their NIH grants can change the future of health.

All told, UCSF received more than $557.6 million total in grants, with an additional $2.8 million in NIH contracts, for which UCSF scientists compete to perform specific research projects for the national institutes.

The rankings reflect UCSF’s expertise in research and education across multiple health-science arenas, as well as the scope of the university’s $1.4 billion research enterprise. UCSF generates more than $6.2 billion in economic benefit to the local economy through jobs, new companies and products, and direct health care to the San Francisco Bay Area and beyond, based on data from a 2010 economic impact report slated to be updated later this year.

These funds also reflect the caliber of research on campus and enable UCSF to be an innovative leader in fields ranging from basic neuroscience to precision medicine, and to deliver on its public mission.

“Success in securing NIH funding is considered a strong indicator of the quality of an institution’s research,” said Keith Yamamoto, PhD, UCSF vice chancellor for Science Policy and Strategy, vice dean of research for the School of Medicine, and professor of cellular and molecular pharmacology. “Although we are proud our top rankings, UCSF’s remarkably creative and insightful investigators and trainees are most importantly contributing fundamental discoveries about biological processes and uncovering disease mechanisms, while delivering our public mission of working to transform health worldwide.”

The NIH grants also play a key role in supporting UCSF’s graduate-level biomedical enterprise, including research into the genetic, molecular and cellular basis of diseases, epidemiological and clinical-research studies, and efforts to translate science into better care.

In addition to supporting powerful scientific advances in research institutions nationwide, “these funds provide crucial support for the early careers of future leaders in scientific research,” said Elizabeth Watkins, PhD, dean of the UCSF Graduate Division and vice chancellor of Student Academic Affairs. “Our graduate students and postdocs drive innovative, creative research and have played key roles in fundamental discoveries in areas such as neuroscience, the human microbiome and cancer immunotherapy in the past year.”

UCSF has been among the nation’s top institutions in NIH funding for more than two decades, as have its four schools. Federal funding also buoys the local and regional economy, as the scientists purchase materials and instruments and employ laboratory staff. Other economic engines include patents and scientific advances generated by NIH-funded research and related industries, such as biotechnology, as well as the entrepreneurs who launch companies based on research conducted on campus.

The top five recipients of FY 2015 research grants according to BRIMR data are as follows, for both institutions and medical schools, not including research contracts: 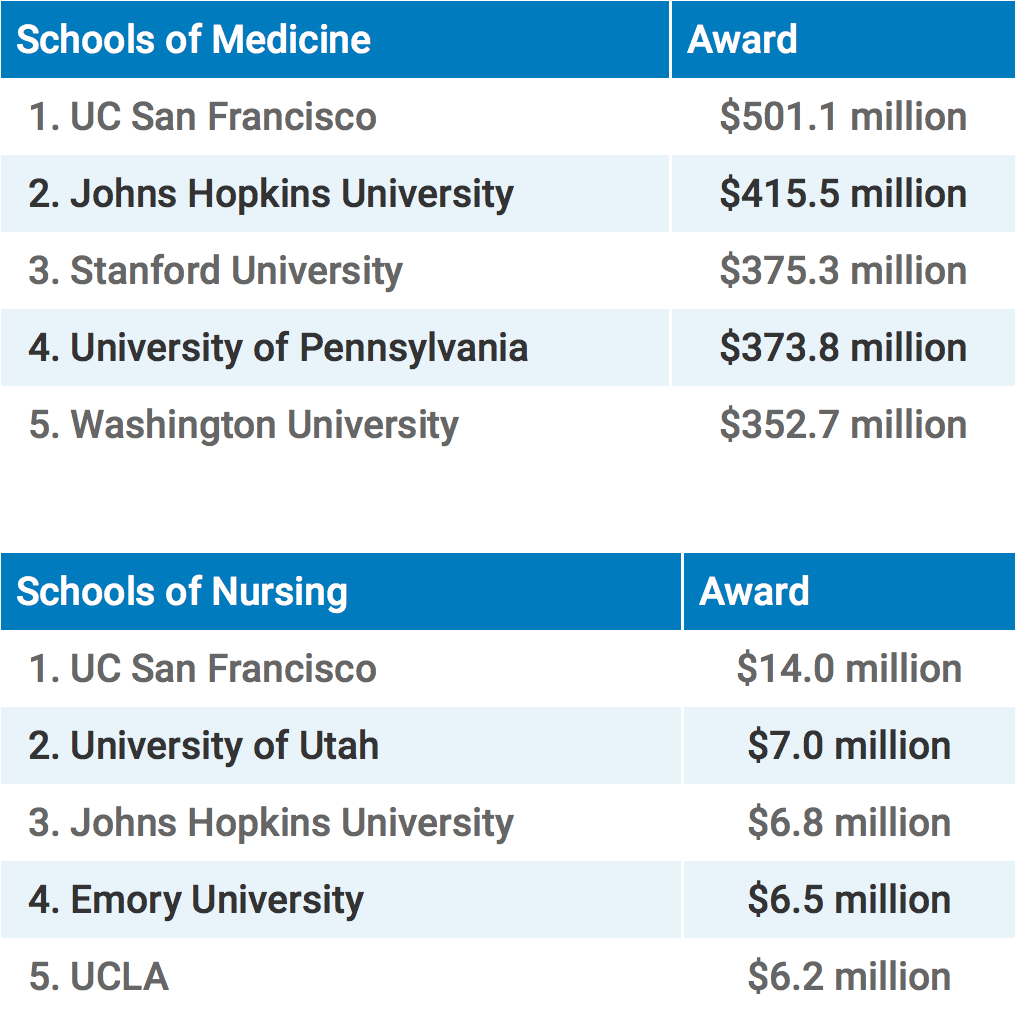 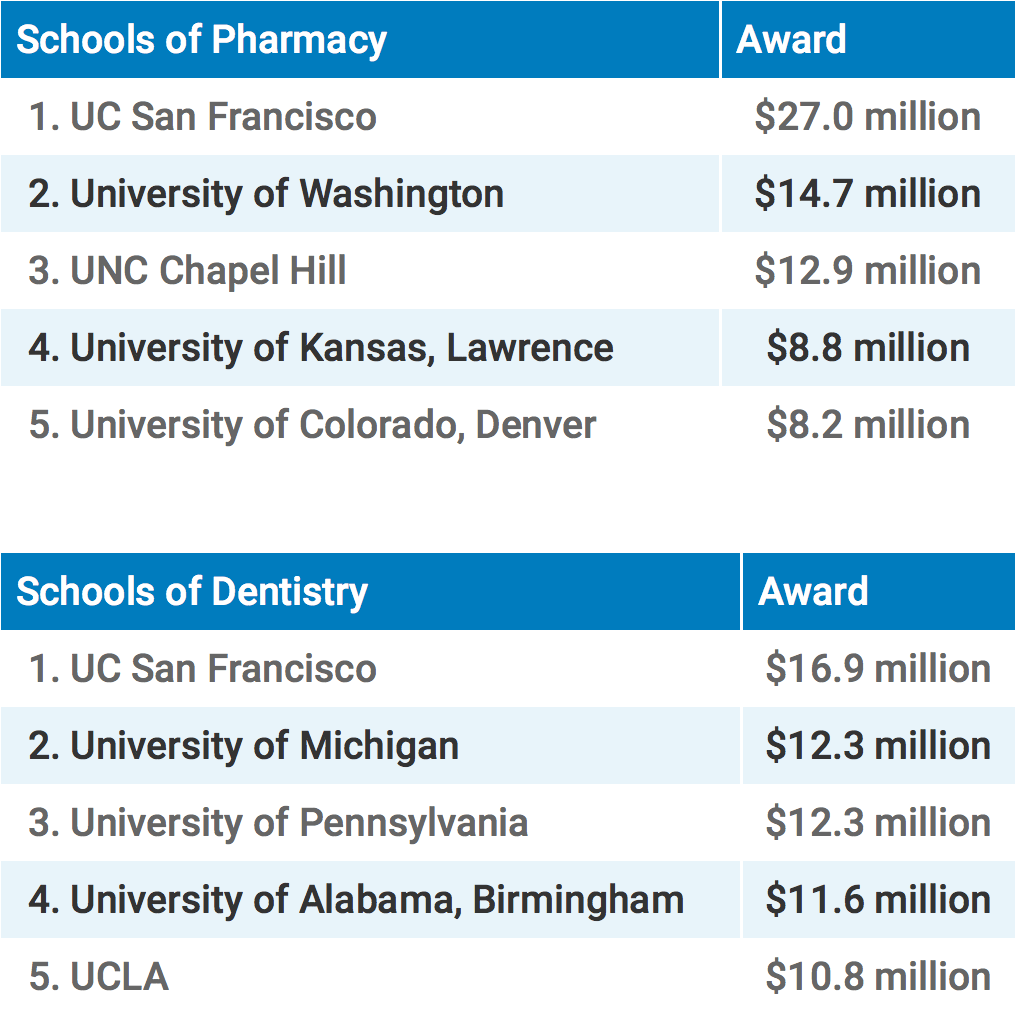 *School rankings are compiled by the independent Blue Ridge Institute for Medical Research based on the most current NIH data.