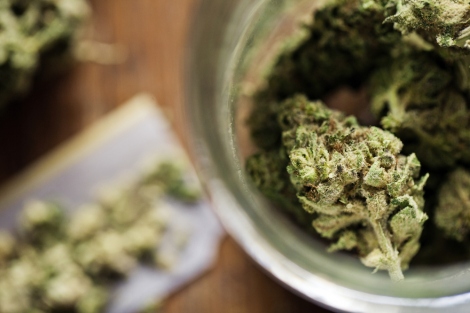 Studies already have shown that daily, long-term marijuana use can impair cognitive function, but what about lower levels of marijuana usage?

A new study conducted at UC San Francisco looked at these “mid-level” pot users and found that this group had worse verbal memory but no deficiencies in other measures of cognitive function.

The findings were published online Feb. 1 in JAMA Internal Medicine.

This observational study does not tease out cause and effect, noted the study’s lead author Reto Auer, MD, MAS, who launched this study with his mentors while in the UCSF Training in Clinical Research program. This means that lower verbal memory could be either a cause or a consequence of marijuana use.

Researchers tracked 3,000 middle-aged adults over 25 years and found that those who used marijuana for more than five years cumulatively have worse verbal memory in middle age than do their peers who have smoked marijuana less often. The five cumulative “marijuana-years” could be broken down in different ways: using every day for five years, using every other day for 10 years, or using a couple times a week for 20 years.

For every five marijuana-years of exposure, verbal memory decreased at a level corresponding to one of two participants remembering one word less from a list of 15 words, they found.

The study, however, did not find marijuana use to be associated with two other measures of cognitive function: processing speed and executive functioning, which controls information organization and focus.

“Some people might find the decrease in verbal memory for five marijuana-years trivial,” said Auer, who is now an academic chief resident at the University of Lausanne in Switzerland. “I don't judge if this is the right interpretation. Marijuana users should decide whether this is an acceptable potential secondary effect of marijuana use.”

As the national conversation about decriminalization of marijuana use grows, we need strong evidence on the likely health effects of long-term marijuana use.
Maria Glymour, ScD, MS

Previous studies have focused on heavier marijuana use on cognitive performance, finding drops in IQ and poorer verbal learning, memory and attention in people who use marijuana daily for 10 or 20 years. Prior imaging studies also have shown structural changes and reduced activity in the regions of the brain involved with memory and attention in these heavy, long-term marijuana users. This current study is the first to examine lower levels of marijuana exposure with cognitive function, the authors said.

“As the national conversation about decriminalization of marijuana use grows, we need strong evidence on the likely health effects of long-term marijuana use,” said study co-author Maria Glymour, ScD, MS, associate professor of Epidemiology & Biostatistics. “This study is an important first step, and its results of will hopefully foster future rigorous epidemiologic research on how an increasingly common behavior affects health.”