Researchers at UC San Francisco have found that boys and girls with sensory processing disorder (SPD) have altered pathways for brain connectivity when compared to typically developing children, and the difference predicts challenges with auditory and tactile processing.

The research, published Jan. 26, in the journal Frontiers in Neuroanatomy, is the biggest imaging study ever done in children with SPD. It’s also the first to compare the white matter tracts in the brain of typically developing boys and girls versus those with an SPD diagnosis. The brain’s white matter forms the “wiring” that links different areas of the brain and is therefore essential for perceiving, thinking and action.

Children with SPD struggle with processing stimulation, which can cause a wide range of symptoms, including hypersensitivity to sound, sight and touch.  Many affected children also have poor fine motor skills, such as problems with holding a pencil, challenges with attention and profound difficulties with emotional regulation. Some SPD children cannot tolerate the sound of a vacuum cleaner or the touch of their loved ones.  Furthermore, a sound that is an irritant one-day can be tolerated the next making parenting very confusing. 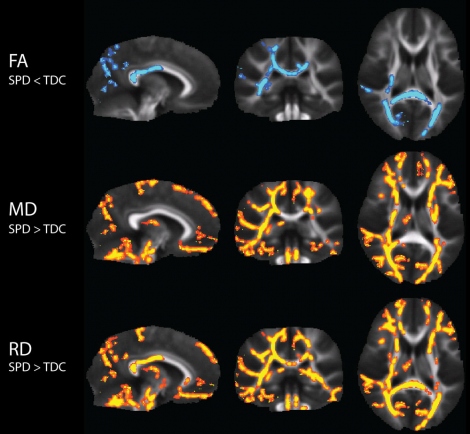 The study enrolled 40 right-handed boys and girls with SPD and 41 right-handed typically developing children, and examined the pathways for connectivity of specific white matter tracts in their brain using diffusion tensor imaging (DTI). The SPD and control subjects’ behaviors were first characterized using a parent report measure of sensory behavior called the Sensory Profile. They also were given the Acoustic Index of the Differential Screening Test and a portion of the Sensory Integration Praxis Tests to directly measure auditory and tactile processing, respectively.

“By comparing the white matter in the brain of kids with SPD and typically developing kids, we were able to relate them to direct measurements of auditory and tactile function and find strong correlations between the white matter and sensory functioning,” said senior author Pratik Mukherjee, MD, PhD, a professor of radiology and biomedical imaging and bioengineering at UCSF. “The children with SPD and the typically developing kids form a continuum, with the children with SPD at one extreme and sensory-typical at the other. This builds on the idea that SPD is a spectrum disorder and for the first time we have direct measurements, rather than solely relying on parent reports.”

The researchers used DTI to measure the structural connectivity of the kids in both groups. The advanced form of imaging measures the microscopic movement of water molecules within the brain and shows the direction of the white matter fibers and their integrity, thereby mapping the structural connections between brain regions. The microstructure of the white matter correlates with sensory functioning, especially in the back of the brain where tracts are responsible for relaying sensory information. 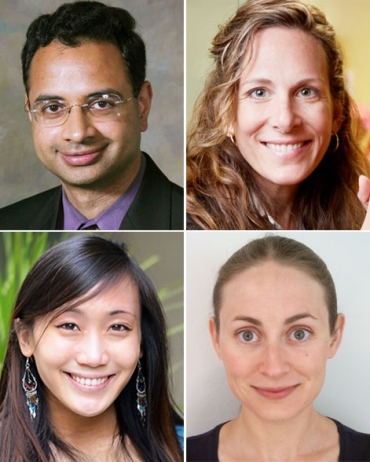 The imaging detected abnormal white matter tracts in the SPD subjects that serve as connections for the auditory, visual and somatosensory (tactile) systems involved in sensory processing, including their connections between the left and right halves of the brain. The abnormal microstructure of sensory white matter tracts shown by DTI in kids with SPD likely alters the timing of sensory transmission, so that processing of sensory stimuli and integrating information across multiple senses becomes difficult or impossible.

“Knowing that the neurological testing is a strong predictor of what we’ll see on the DTI means we can use it more confidently to calculate sensory challenges, and tailor our treatments to best help our patients,” said Elysa Marco, MD, who led the study along with postdoctoral fellow Julia Owen, PhD, and Yi-Shin Chang, MS, in the department of radiology and biomedical imaging. “This ties directly into precision medicine – not relying on one size fits all for clinical diagnoses – but objectively assessing patients using quantifiable biomarkers to then personalize their treatment.”

Thanks to groundbreaking work from UCSF Benioff Children’s Hospital San Francisco, a biological basis for SPD has been discovered.  There is much work to be done and a funding gap. We still need to:

This new research follows UCSF’s groundbreaking study published in 2013 that was the first to find that boys affected with SPD have quantifiable regional differences in brain structure when compared to typically developing boys. This work showed a biological basis for the disease but prompted the question of how these differences compared with other neurodevelopmental disorders and how it would manifest in girls.

SPD can be hard to pinpoint, as up to 90 percent of children with autism also are reported to have atypical sensory behaviors, and SPD has not been listed in the Diagnostic and Statistical Manual used by psychiatrists and psychologists. However, children with sensory-based dysfunction who do not meet the criteria for autism based on social communication deficits remain virtually unstudied.

This work was funded by grants from the Wallace Research Foundation to EJM and to PM and a gift from Toby Mickelson and Donald Brody to EJM. EJM has received neuroimaging support that contributed to this work from NIH K23 MH083890. The researchers also received generous support from the SPD community of family and friends through gifts large and small to the UCSF Sensory Neurodevelopment and Autism Program (SNAP.) The authors have reported that they have no conflicts of interest relevant to the contents of this paper to disclose.