One year after UC San Francisco students launched a national movement to highlight racial disparities in education, health care and civic justice, they gathered again to meet a new challenge for the movement: turn words into actions.

About 100 UCSF students, faculty and staff gathered in front of the Parnassus Library on Dec. 10, on the anniversary of last year’s “die-in,” which sparked similar demonstrations at medical schools across the country.

While last year was about drawing attention to issues that disproportionately affect underrepresented groups, this year’s demonstration gave the UCSF community a forum to discuss making a difference. Organizers handed out notecards with simple questions, encouraging attendees to offer ideas on what they could do, what UCSF could do, and what allies could do to advance equity and inclusion for all.

“I hope students walk away feeling empowered,” UCSF School of Medicine student and White Coats 4 Black Lives chapter student leader Kafi Hemphill said. “I don’t think that I knew how much impact I could have on my university when I was a first-year. I definitely know as a second-year.” 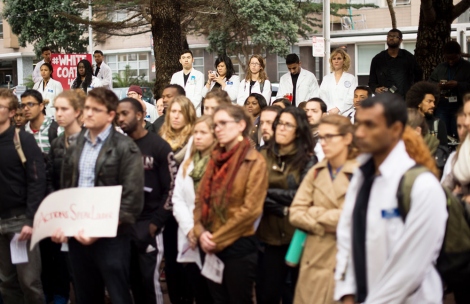 About 100 UCSF students, faculty and staff gathered for the demonstration, with the theme of #ActionsSpeakLouder. Photo by Noah Berger 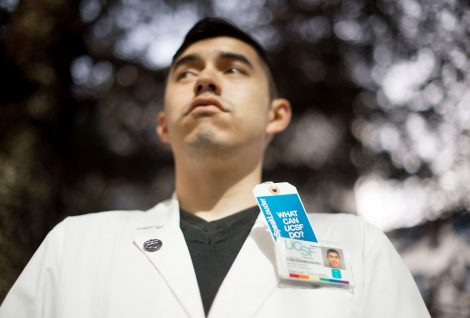 Manuel Gonzalez and all other participants were asked to fill out cards asking for ideas to improve equity and inclusion at UCSF. Photo by Noah Berger

A core group of UCSF medical students and campus allies reached out to their peers across the U.S. to organize a day of action. The result was a series of “die-ins” around the country, with medical students donning their white lab coats and laying down in peaceful protest to call for institutional change, especially in regard to health care and medical education.

Over the past year, the UCSF chapter of White Coats for Black Lives became the seed for a larger discussion about diversity and equity on campus and in the communities UCSF impacts.

Students at other schools haven’t had the same type of access, Hemphill said.

“At UCSF we’ve had a lot of open dialogue – not only with Vice Chancellor Renee Navarro in the Office of Diversity or with LaMisha Hill in the Multicultural Resource Center – but the Chancellor has focused on the diversity problem, and there was a Dean’s retreat for our School of Medicine to focus on racism and racial disparity,” Hemphill said. “A lot of other White Coats for Black Lives chapters have struggled to get support from their administration.”

Despite progress made in identifying the problem, UCSF leaders recognize that there’s still more work to be done to ensure diversity in the educational and research environment, as well as equity in health care quality and access.

“It is a sad fact that, despite three decades of trying, health disparities for Americans of African, Hispanic, and Native American heritage have not been eliminated,” Executive Vice Chancellor and Provost Dan Lowenstein and Vice Chancellor Navarro said in a letter to the UCSF community in support of the Dec. 10 demonstration.  “Our students rightly question whether we as healers, educators and scientists are doing enough to address wrongs that, while they may have begun long ago, persist to this day.”