The Atlantic Philanthropies is awarding UC San Francisco and Trinity College Dublin, the University of Dublin, $177 million to create the Global Brain Health Institute, a groundbreaking venture to stem the precipitous rise in dementia by training and connecting a new generation of leaders worldwide.

This landmark grant — the largest program grant Atlantic has ever made — embodies the commitment of Atlantic and its founder, Charles “Chuck” Feeney, to address global challenges with big, bold initiatives that will serve society for generations to come. 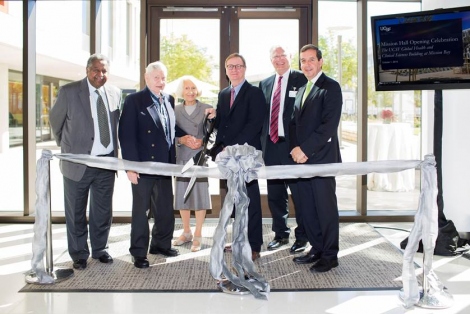 The $177 million to establish the Global Brain Health Institute is the largest program grant ever made by the Atlantic Philanthropies, founded by Charles "Chuck" Feeney. Here, Feeney (second from left) and his wife, Helga, join UCSF leaders for the 2014 opening of the UCSF Mission Hall building, which the couple also supported.

“Our goal is to create a generation of leaders around the world who have the knowledge, skills and drive to change both the practice of dementia care and the public health and societal forces that affect brain health,” said Christopher G. Oechsli, president and CEO of The Atlantic Philanthropies. “By doing so, we hope to reduce dramatically the number of older people who develop this disease, which affects disproportionally those who are socioeconomically disadvantaged, and consumes not just the millions directly afflicted, but their families and caregivers as well.

“We have been working for several years in the Republic of Ireland and Northern Ireland to develop and implement their national strategies to combat dementia, and we are ready to extend and expand that successful effort.”

Dementia is a Global Problem

Co-led by UCSF and Trinity College Dublin, the GBHI initiative will train 600 global leaders over 15 years in the U.S., Ireland and across the world, including in Cuba and other Latin American countries, Vietnam and elsewhere in Asia, South Africa and Australia – to carry out dementia research, deliver health care, and change policies and practices in their regions. In doing so, GBHI will be engaging with other institutions and partners around the world. 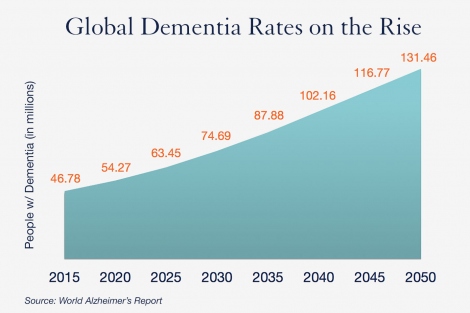 By 2050, experts warn, the number of people with dementia, now about 48 million worldwide, will more than triple, yet fewer than two dozen countries, including the United States and Ireland, have focused on this looming crisis.

While the causes of some forms of dementia are genetic and other forms, including Alzheimer’s disease, appear to involve multiple factors, research suggests that up to 30 percent of cases can be prevented through public health and lifestyle interventions. This means attending to cardiovascular risk factors like high blood pressure and LDL cholesterol, lifestyle factors like diet, sleep, exercise and smoking, and psychological factors like depression and loneliness.

We want to train leaders, not just in medicine and public policy, but also social science, journalism, law, business and the arts, who can teach others about the preventable causes of cognitive impairment.

The institute will begin with two programs. The GBHI Fellows Program will train eight fellows a year – four each at UCSF and Trinity College Dublin – for up to two years. An Exchange Scholars Program will engage up to 32 multidisciplinary scholars at UCSF and Trinity for up to a year. Some fellows and scholars will resemble traditional biomedical trainees, with MD, PhD or RN degrees, while others will be more policy focused and may come into the program with bachelor’s or master’s degrees or with work experience in cognate fields. Applicants for the exchange scholars program may come from a wide variety of fields.

“We want to train leaders, not just in medicine and public policy, but also social science, journalism, law, business and the arts, who can teach others about the preventable causes of cognitive impairment, which disproportionately affect the poor,” said Bruce Miller, MD, a behavioral neurologist and director of the Memory and Aging Center at UCSF who will lead the initiative with Ian Robertson, PhD, a neuroscientist at Trinity College. “That way, we can help change the course of this disease and protect vulnerable people around the world.”

“Dementia needs to be tackled across disciplines, from molecular biology to psychology and physiology to social science – to develop innovative, cutting edge solutions,” Robertson said. “Both Trinity and UCSF are well placed to do this, as we have leading academics and practitioners in all of these fields and close collaboration and service integration among people who work at all levels to meet this growing challenge.”  Basic and clinical neuroscience faculty at UCSF and Trinity will provide the scientific foundation for both fellows and scholars, but the training will be multidisciplinary, integrating geriatrics, geropsychiatry, cognitive neuroscience, public policy, health economics, health law and communications. Fellows will receive hands-on experience in diagnosis, treatment and long-term management of patients with cognitive disorders, as well as elderly people who are at risk for brain health disorders. They will also be trained in how to help affected families and their caregivers.

Training Leaders Around the World

About half the GBHI Fellows and Scholars will come from the United States, Northern Ireland and the Republic of Ireland. The other half will come from countries around the world. Trainees will be encouraged to return to their home countries to become leaders and change agents in medicine, nursing, the social sciences and health policy. Partial support will be available to trainees after they have returned home to develop the dementia-focused programs, policies and practices they pilot during their training with GBHI. Trainees will have a network of mentoring and collegial support throughout their careers.

These initiatives will emphasize pragmatic approaches that can be implemented in any country, regardless of national or per capita wealth. GBHI’s initial focus will be on existing projects at UCSF and Trinity that have been designed to protect especially vulnerable people, including caregivers and isolated elders, along with pilot programs for stroke prevention and reducing the stigmatization of people with dementia. Eventually, GBHI will seek government and other funding support for up to eight projects a year and to evolve independent regional hubs.

“We are enormously grateful for Chuck Feeney’s and Atlantic Philanthropies’ ongoing partnership with UCSF, which is driving very important work in the health sciences, especially brain health,” said UCSF Chancellor Sam Hawgood, MBBS. “Their long-term vision and continued investment demonstrates faith in our ability to combat terrible diseases and to serve patients and their families around the world.”

“The Atlantic Philanthropies and founder Chuck Feeney have made the biggest private donation in Irish history. The sum donated is huge but so, too, is the problem we are trying to solve. There is hardly a family anywhere that has not experienced dementia in some shape or form. We are delighted that The Atlantic Philanthropies has once again turned to Trinity and UCSF to find answers to the problems posed by this difficult condition. There is no doubt in my mind that this imaginative project will bring benefits to people around the world, create jobs here in Ireland and deepen Trinity’s expertise in neuroscience and aging. The Trinity team, headed by Professors Ian Robertson and Brian Lawlor, has already delivered pioneering programs. In making this award, The Atlantic Philanthropies intended to leave a lasting legacy for the benefit of society, and we in Trinity and UCSF will make sure that we fulfill that objective."

About Trinity College Dublin, the University of Dublin

Trinity College Dublin, the University of Dublin, founded in 1592, is Ireland’s oldest university and today has a vibrant community of 17,000 students. It is recognised internationally as Ireland’s premier university. Cutting edge research, technology and innovation places the university at the forefront of higher education in Ireland and globally. It encompasses all major academic disciplines, and is committed to world-class teaching and research across the range of disciplines in the arts, humanities, engineering, science, social and health sciences. Its historic campus is situated in the center of Dublin, Ireland’s capital city.

About The Atlantic Philanthropies

The Atlantic Philanthropies are dedicated to advancing opportunity, equity and human dignity. Established in 1982, when Chuck Feeney quietly committed virtually all of his assets to the foundation, Atlantic has since made grants approaching $8 billion. In keeping with Mr. Feeney’s “Giving While Living,” big-bet philosophy, Atlantic invests in systemic change to accelerate improvements in the lives of disadvantaged and vulnerable people. The foundation, which has operated in Australia, Bermuda, Cuba, Northern Ireland, the Republic of Ireland, South Africa, the United States and Vietnam, will complete all grant making in 2016 and conclude operations shortly afterward.