The highest honor of the American College of Rheumatology has been awarded to David Wofsy, MD, director of the Russell/Engleman Rheumatology Research Center at UC San Francisco.

The ACR’s Presidential Gold Medal is given to recognize outstanding achievements spanning a rheumatologist’s entire career. The award was presented at the ACR annual meeting in San Francisco on Nov. 7. 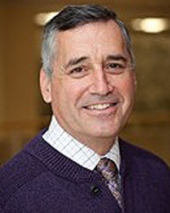 Wofsy’s career traces a path that exemplifies translational science, first at the bench studying animal models for autoimmune diseases, and currently in the clinic conducting trials of novel biologic approaches to the treatment of people with systemic lupus erythematosus. Among his many research achievements, he was the first to report that targeting the signal for T-cells to activate could slow the progression of lupus in mice. This work laid the foundation for translational studies that resulted in FDA approval of abatacept, now used to treat rheumatoid arthritis and under investigation as a possible treatment for other autoimmune diseases.

“There is a revolution underway in the treatments available for patients with chronic inflammatory and autoimmune diseases,” says Wofsy. “When I entered training in rheumatology, our clinics were filled with disabled patients in wheelchairs and on gurneys. Those days are gone forever, but there is still a long way to go. It has been exciting and gratifying to play a small role in that progress.”

In addition to leading the Rheumatology Research Center, Wofsy also is the principal investigator of the National Institutes of Health-funded Autoimmunity Center of Excellence at UCSF as well as associate dean for Admissions in the UCSF School of Medicine.

“David’s leadership abilities are truly legendary,” wrote ACR past-president James O’Dell, MD, in Wofsy’s award nomination. “Several of my very favorite ACR memories were the rare occasions when someone would refer to something that I had done as ‘almost Wofsonian.’ In rheumatology leadership circles, there truly is no higher compliment.”