Reducing consumption of added sugar, even without reducing calories or losing weight, has the power to reverse a cluster of chronic metabolic diseases in children, including high cholesterol and blood pressure in as little as 10 days according to a study by researchers at UC San Francisco and Touro University California.

“This study definitively shows that sugar is metabolically harmful not because of its calories or its effects on weight; rather sugar is metabolically harmful because it’s sugar,” said lead author Robert Lustig, MD, MSL, pediatric endocrinologist at UCSF Benioff Children’s Hospital San Francisco. “This internally controlled intervention study is a solid indication that sugar contributes to metabolic syndrome, and is the strongest evidence to date that the negative effects of sugar are not because of calories or obesity.”

Jean-Marc Schwarz, PhD, of the College of Osteopathic Medicine at Touro University California and senior author of the paper added, “I have never seen results as striking or significant in our human studies; after only nine days of fructose restriction, the results are dramatic and consistent from subject to subject. These findings support the idea that it is essential for parents to evaluate sugar intake and to be mindful of the health effects of what their children are consuming.”

The paper appears online on Oct. 27, and in the February 2016 issue of the journal Obesity.

Metabolic syndrome is a cluster of conditions – increased blood pressure, high blood glucose level, excess body fat around the waist, and abnormal cholesterol levels – that occur together and increase risk of heart disease, stroke, and diabetes. Other diseases associated with metabolic syndrome, such as non-alcoholic fatty liver disease and type 2 diabetes, now occur in children – disorders previously unknown in the pediatric population. 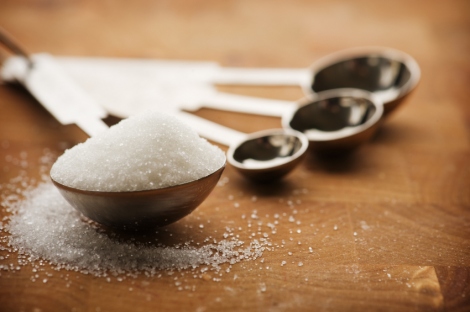 Participants were identified through the Weight Assessment for Teen and Child Health Clinic (WATCH) at UCSF Benioff Children’s Hospital San Francisco, an interdisciplinary obesity clinic dedicated to targeting metabolic dysfunction rather than weight loss. Recruitment was limited to Latino and African-American youth because of their higher risk for certain conditions associated with metabolic syndrome, such as high blood pressure and type 2 diabetes.

In the study, 43 children between the ages of 9 and 18 who were obese and had at least one other chronic metabolic disorder, such as hypertension, high triglyceride levels or a marker of fatty liver, were given nine days of food, including all snacks and beverages, that restricted sugar but substituted starch to maintain the same fat, protein, carbohydrate, and calorie levels as their previously reported home diets. Baseline fasting blood levels, blood pressure, and glucose tolerance were assessed before the new menu plan was adopted.  The study menu restricted added sugar (while allowing fruit), but substituted it by adding other carbohydrates such as bagels, cereal and pasta so that the children still consumed the same number of calories from carbohydrate as before, but total dietary sugar was reduced from 28 to 10 percent, and fructose from 12 to 4 percent of total calories, respectively. The food choices were designed to be “kid food” – turkey hot dogs, potato chips, and pizza all purchased at local supermarkets, instead of high sugar cereals, pastries, and sweetened yogurt.

Children were given a scale and told to weigh themselves everyday, with the goal of weight stability, not weight loss. When weight loss did occur (a decrease of an average of 1 percent over the 10-day period but without change in body fat), they were given more of the low-sugar foods.

“When we took the sugar out, the kids started responding to their satiety cues,” said Schwarz. “They told us it felt like so much more food, even though they were consuming the same number of calories as before, just with significantly less sugar. Some said we were overwhelming them with food.”

After just nine days on the sugar-restricted diet, virtually every aspect of the participants’ metabolic health improved, without change in weight. Diastolic blood pressure decreased by 5mm, triglycerides by 33 points, LDL-cholesterol (known as the “bad” cholesterol) by 10 points, and liver function tests improved. Fasting blood glucose went down by five points, and insulin levels were cut by one-third.

“All of the surrogate measures of metabolic health got better, just by substituting starch for sugar in their processed food – all without changing calories or weight or exercise,” said Lustig. “This study demonstrates that ‘a calorie is not a calorie.’ Where those calories come from determines where in the body they go. Sugar calories are the worst, because they turn to fat in the liver, driving insulin resistance, and driving risk for diabetes, heart, and liver disease. This has enormous implications for the food industry, chronic disease, and health care costs.”

Funding was provided by the National Institutes of Health, UCSF Clinical Translational Science Institute and Touro University. None of the authors report any conflicts of interest.

About the Touro College and University System