Ephraim Engleman, MD, a pioneering rheumatologist whose passion and dedication to his work at UC San Francisco spanned a staggering seven decades, has died at 104.

Engleman passed away Wednesday doing what he loved so much: working as director of the Rosalind Russell/Ephraim P. Engleman Rheumatology Research Center at UCSF. One of the top arthritis research centers in the nation, it was renamed in honor of its founding director last year.

“Eph was a treasured member of the UCSF community,” said Chancellor Sam Hawgood, MBBS. “Not only did he put UCSF on the map in arthritis research during his extraordinary career, he lived an incredibly rich and vibrant life that inspired his patients, his colleagues and countless others who had the pleasure of knowing him. He will be hugely missed.”

Lloyd “Holly” Smith, MD, former chair of the UCSF Department of Medicine and associate dean emeritus of the School of Medicine, noted that his colleague and friend lived “an exceptionally long and useful life” with a “deep capacity for friendship.”

The centenarian always addressed his senior status with good humor, often sharing his top 10 list of “commandments’’ for longevity. They include: avoid air travel, have lots of sex, keep breathing, and most appropriately, “Enjoy your work, whatever it is, or don't do it.”

In fact, Engleman declared that he never planned to retire. "I think retirement, generally speaking, is a great mistake," he told the San Francisco Chronicle as he turned 100 – spending his milestone birthday at the office.

Engleman celebrated birthday No. 102 in 2013 by releasing a memoir, My Century, which captured a fascinating life and career that almost didn’t turn toward medicine.

Born in San Jose in 1911, Engleman was a violin prodigy, performing concerts as early as 6 years old; and out of high school, he joined an orchestra that accompanied silent movies at the Fox California Theater. He was so busy working as a professional musician that it took him six years to earn his bachelor’s degree from Stanford and his grades, he admitted, were “terrible.” 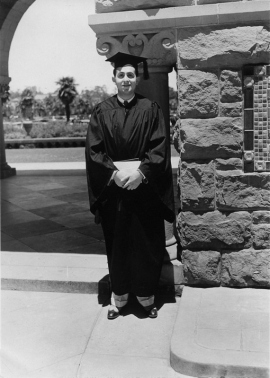 Engleman on his graduation day at Stanford. Image courtesy of Engleman family 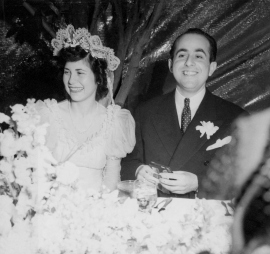 Engleman and his wife, Jean, had been married since 1941. Image courtesy of Engleman family

Engleman still was accepted into Columbia’s medical school, where he began studying rheumatic disease, and followed with medical residencies at UCSF and Tufts University and a fellowship at Massachusetts General Hospital. During World War II, he served as a major and chief of the Army’s Rheumatic Fever Center.

In 1947, Engleman returned to UCSF, joining the clinical faculty and becoming the first rheumatologist to set up practice in San Francisco. He became a respected leader within the University, serving as president and co-founder of the Association of Clinical Faculty (1970-71), president of the Executive Medical Board of the UC Hospital and Clinics, San Francisco (1973-74), chief of Rheumatology at UCSF until 1982, and chief of the Arthritis Clinic until 1988.

Engleman helped lead the field of rheumatology’s transformation over the years, from mostly prescribing aspirin and rest to wheelchair-bound patients in the 1950s, to the emergence of cortisone as a major treatment advance, to today’s biologics that work to interrupt immune system signals that are damaging joint tissue.

He’s won many awards, including the Presidential Gold Medal Award by the American College of Rheumatology, the highest national honor in the field of rheumatology, and he’s authored more than 100 research papers.

In 1979, Congress gave $800,000 to establish the Rosalind Russell Rheumatology Research Center, named after the Hollywood star whose acting career largely ended because of severe rheumatoid arthritis and prompted her to become a crusader for arthritis research. Engleman was founding director of the center, helping raise more than $50 million in private support for rheumatology during his tenure.

The center is now a vital source of support for scientific investigation into the causes and potential cures of arthritis and autoimmune diseases and for training physicians and scientists to be the next generation of leaders in the field.

“For those of us who have been part of the UCSF rheumatology program, there is no one who has had a greater impact on our work than Eph Engleman,” said Lindsey Criswell, MD, MPH, current chief of the UCSF Division of Rheumatology.

“Eph was a tireless supporter of the UCSF rheumatology program and never missed an opportunity to advocate for our faculty, trainees and the patients we cared for, “ she said. “He was particularly supportive of research, which he contributed to generously, both intellectually and financially.”

Throughout his distinguished career, Engleman has maintained his love for the violin, playing the instrument almost every night after dinner. He got together with friends each week to play chamber music as the San Andreas Quartet. 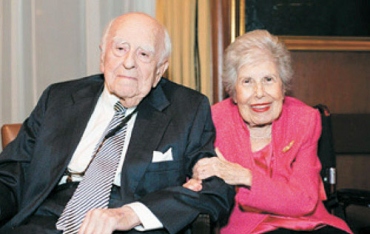 Engleman with his wife, Jean, at the dedication of the Rosalind Russell/Ephraim P. Engleman Rheumatology Research Center at UCSF last year.

Between work and music, it would have been tough to compete for Engleman’s affection, but his greatest love was his family. He called his wife of 74 years, Jean Sinton Engleman, his biggest inspiration.

Edgar Engleman, a pathologist and director of the Stanford Blood Center, called his father, "an incredible role model."

"He was so positive and optimistic. He was a born leader and genuinely a joy to be around," he said.