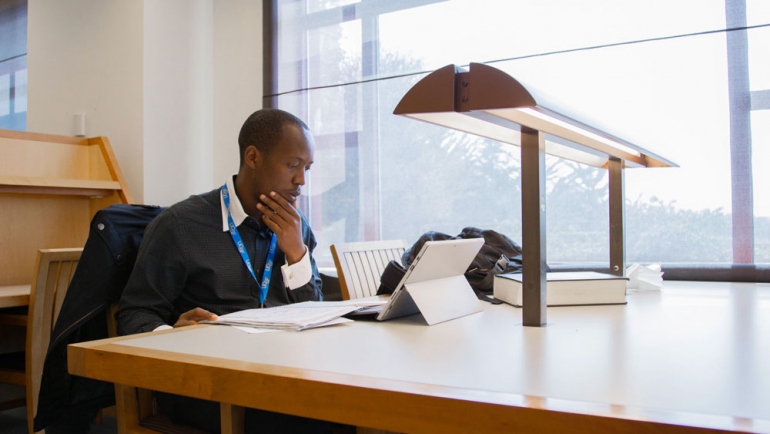 Theo Ndatimana studies in the library at UCSF, where he's a second-year pharmacy student. Photo by Susan Merrell

Like most high-achieving individuals, Theo Ndatimana has always demanded the best of himself. And so have his parents.

“Even when I was first in my class and there was no one in front of me academically, they would say, ‘But you missed three points. What happened to those three points?’” recalled Ndatimana, a second-year student in the School of Pharmacy.

He grew up in a small village in Rwanda, near the city of Gikongoro in the Nyamagabe district. His family came from humble means and professional success was an abstract concept within his extended family.

Still Ndatimana’s parents instilled the value of getting an education in him, even though the opportunity eluded them. As the first-born child, he embraced their idea that the only way out of poverty is through education.

“Somebody had to have the initiative and discipline to go to school, stay focused and excel,” he said. “My hope, even at an early age, was to achieve greatness so that someday one of my descendants would be able to say, ‘I used to have an uncle or grandpa who made it to the top of the top.’”

Everything changed in 1994. Theo was eight years old when Rwanda’s ruling Hutu government (approximately 85 percent of the country’s population) began targeting the minority Tutsi tribe after an airplane carrying President Habyarimana, a Hutu, was shot down.

Tutsi – and people suspected of being Tutsi – were killed during the genocide, and Ndatimana’s parents and other members of his extended family were among those who lost their lives.

I put too much work to surviving. After seeing death with my own eyes, I can’t all of a sudden give up. … That’s how I view life these days.
Theo Ndatimana
Student, School of Pharmacy

At one point, Ndatimana found himself in a queue of strangers who were waiting to be executed. He was third in line when one of the Hutu guards said, “I think this is a lost Hutu child. He doesn’t belong in this line. Go! Get out of here!”

Ndatimana still doesn’t know why his life was spared but that experience taught him to value every day he has on this planet.

“I put too much work to surviving,” he said. “After seeing death with my own eyes, I can’t all of a sudden give up. … That’s how I view life these days.”

Ndatimana, his sister, his uncle and cousins are among the few in his extended family who survived the genocide. His uncle, who took care of the survivors, knew he had to leave his unstable homeland, so he toiled for eight years to save enough money to be able to move to the United States with his remaining family members. They settled down in the city of Redlands, Calif. in Southern California.

Ndatimana started school in America in the 10th grade. Beyond the language and cultural barriers, he had to overcome a school system that was very different from the one he knew. Then he found his groove in the science classes. 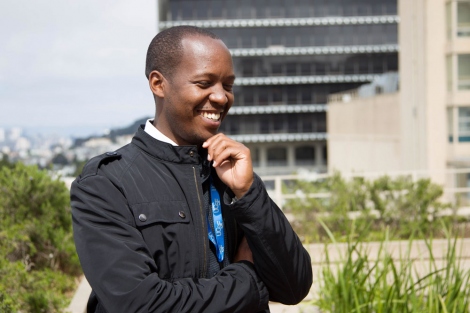 Theo Ndatimana says he struggled in school when he first arrived in the U.S., but found his groove in science classes: “That’s the beauty of science; its concepts are universal.” Photo by Susan Merrell

“That’s the beauty of science; its concepts are universal,” he said. “You don’t have to know English to understand it.”

In just three short years in the U.S., Theo managed to graduate in the top five of his high school class.

“I still display my high school diploma even to this day,” he said. “It was one of the highest achievements I felt like I’ve done. It gave me confidence. It says, ‘OK. If you can do this, you can do that. And if you push a little further, you can get even higher than that.’ From that point, I wanted to keep pushing my academic pursuits. There was no limit.”

Ndatimana earned his bachelor’s degree in bioinformatics and genomics from UC Riverside. Then he earned a master’s degree in public health from Loma Linda University.

After earning his master’s degree, he worked for a company that provided health care services to low-income and elderly individuals. As part of the company’s pharmaceutical services department where he dealt with disease management, cost containment,  and service improvement, he discovered and developed a passion for pharmaceutical sciences. 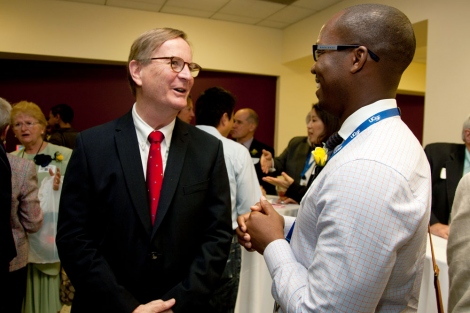 Theo Ndatimana chats with UCSF Chancellor Sam Hawgood after the 2014 State of the University address, in which Hawgood acknowledged Ndatimana's extraordinary story of survival and success. Photo by Cindy Chew

“Pharmacy includes everything I want to do,” he said. “I want to have infinite knowledge and make a difference in people’s lives. I could achieve that through pharmaceutical sciences by being able to manage the health of an entire person.”

His first year in the nation’s top-ranked PharmD program was more challenging than he had anticipated. “Anything achieved easily probably won’t get you far in life. It’s been challenging but it’s pushed my limits, which is exactly what I was looking for. I’ve done things I didn’t think I could do.”

As Ndatimana continues his academic career at UCSF this fall, he reflects on the values his parents, now gone for 21 years, instilled in him at an early age.