For years, medicine has relied on self-reported race/ethnicity as the basis of an array of decisions, from risk for disease to matching organ donors. Now, a study led by researchers at UC San Francisco has found that when that information matters most – in connecting bone marrow donors to patients – the format of the questions may determine how well the answers actually correspond to their genes.

The new study, publishing today in PLOS ONE, used a donor sample from the National Marrow Donor Program registry to evaluate how various measures of self-identification intersect with genetics. They found that when donors reported their geographic origins, the responses often matched their genetics better than when they simply selected from standard race/ethnicity categories – but not always. Just four out of five participants gave consistent responses between these two common self-identification formats.

The authors said these results show that more research is needed to refine methods for collecting and interpreting race/ethnicity and geographic ancestry for medical purposes. The issue is especially significant for bone marrow transplants, in which identifying common genetic ancestry is key in finding a potential donor outside the immediate family. 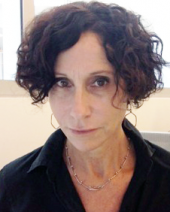 “In medicine, we’ve been under the assumption that it’s just a matter of presenting people with the right check boxes,” said Jill Hollenbach, PhD, MPH. assistant professor at the UCSF School of Medicine and lead author of the study. “It turns out that it’s much more complex than that.”

The National Marrow Donor Program (NMDP) Be The Match Registry® is a database of HLA genes from more than 13 million potential bone marrow donors. HLA genes produce proteins that distinguish between “self” and “not self,” which controls whether a transplanted organ is accepted or rejected by the body.

A successful transplant requires the patient be matched to five different HLA genes, each of which has two copies. Identifying a perfect “10 for 10” match is difficult because most of the donors submitted samples at a time when genotyping was much less advanced than it is today.

“By the time you’re searching for a transplant match, the patients are very sick. You don’t have time to dilly dally with additional genetic tests,” Hollenbach said. “We want to predict who is most likely to be a match. This prediction relies heavily on ancestry.”

To find likely matches to pursue, the registry uses bioinformatics to weed out the donors unlikely to have matching HLA genes.

As human populations differentiate across the globe, their genomes differentiate with them. The HLA genes are highly variable, but certain variations are found at higher frequencies in some regions of the world than others. A patient with geographic ancestry in East Asia, for example, is more likely to have the same HLA variation as another person with origins in East Asia than someone with European ancestry. To get at this information, most medical facilities use the patients’ race/ethnicity self-identification as a proxy. This can be challenging for people who trace their ancestry to multiple origins. 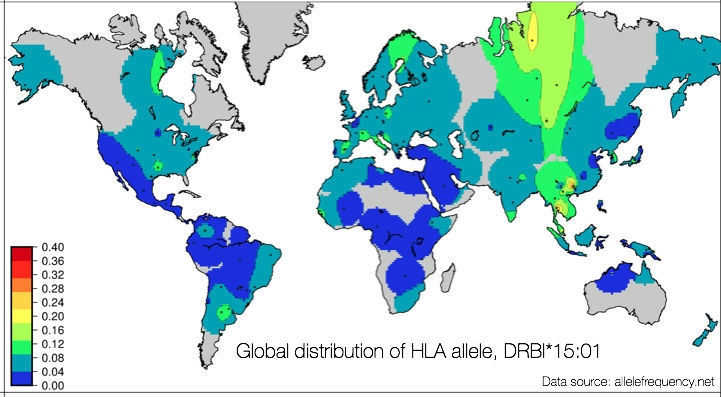 Common ancestry is key in connecting bone marrow donors to patients. If a patient needs to be matched at the HLA allele, DRBI*15:01, a potential donor with family origins in south east Asia is more likely to match than someone with South American ancestry.

“The United States census uses a “check all that apply” technique, which is OK, but we want to try to get a little more refined to improve our matching efficiency,” said Martin Maiers, director of Bioinformatics Research at the NMDP/Be The Match Registry and co-author of the study. “Better matching means better outcomes for transplant patients.”

By analyzing the cheek swabs, the researchers genotyped 93 ancestry informative markers to identify the participants’ genetic ancestry. They found a strong correlation between those ancestry markers and HLA genes.

The researchers found that no one measure of self-identification best predicted the donor’s genetic ancestry. However, information about the geographic origins of the donors’ grandparents corresponded most closely with genetics, particularly for participants with ancestry from multiple continents.

“The conventional wisdom of the last decade or two has been that race is a social construct. That’s true, but race is also part of the language of self-identification in this country,” said Hollenbach, whose team is conducting a further study of 100,000 potential donors. “Let’s understand how these different forms of self-identification and genetic ancestry intersect to improve transplant matching for people of all ancestral backgrounds.”

Other contributors to the PLOS ONE study are Aliya Saperstein, PhD, Paul J. Norman, PhD, and Peter Parham, PhD, of Stanford University; Mike Albrecht of the NMDP; and Cynthia Vierra-Green of the Center for International Blood and Marrow Transplant Research at the NMDP. This work was supported by the Office of Naval Research.