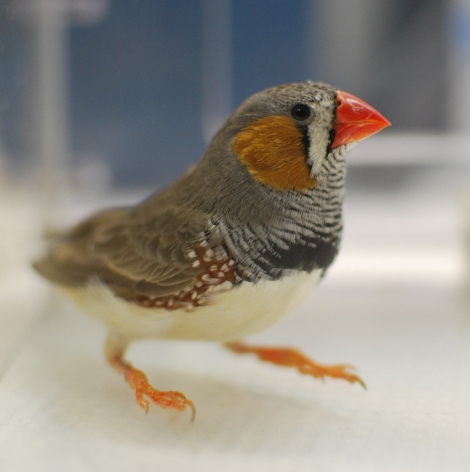 Like top musicians, songbirds train from a young age to weed out errors and trim variability from their songs, ultimately becoming consistent and reliable performers. But as with human musicians, even the best are not machines. To learn and improve, the songbird brain needs to shake up its tried-and-true patterns with a healthy dose of creative experimentation. Until now, no one has found a specific mechanism by which this could occur.

Now, researchers at UC San Francisco have discovered a neurological mechanism that could explain how songbirds’ neural creativity-generator lets them refine and alter their songs as adults. The finding could help explain how the human brain learns complex motor skills – from playing the oboe to driving a car – and may have long-term implications for treating neurological conditions ranging from Parkinson’s disease to obsessive disorders.

To learn its song, a bird uses a specialized portion of its brain equivalent to the human basal ganglia, a collection of neural structures nestled in the base of the brain.

“This is an incredibly well-conserved circuit – from lampreys to us – which in humans is connected to everything from movement to mood,” said lead author Hamish Mehaffey, PhD, a post-doctoral researcher in the lab of the late Allison Doupe, MD, PhD, a beloved professor of psychiatry and physiology at UCSF who passed away in October 2014.

In her 20 years at UCSF, Doupe established the birdsong system as a model for the basal ganglia’s role in human language, fine motor learning and psychiatric disease, said Michael Brainard, PhD, a UCSF professor of physiology who was both Doupe’s husband and a frequent collaborator.

“Her recent work had shown that precise patterns of activity arising from the basal ganglia were important for brain plasticity and learning, but we didn’t understand what aspects of that patterning were important,” Brainard said. “The current results demonstrate a mechanism that could explain why these activity patterns matter and reveal the 'rules' that let them alter brain connectivity. This is a key advance.” 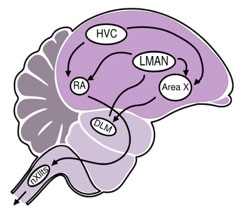 According to one theory, the basal ganglia allows birds (and humans) to learn fine motor skills by acting as a kind of “critic” or “creative director,” molding the work of the active “performer” located elsewhere in the brain. Here are the players:

Song Performer: HVC
The Performer sends bursts of activity to Song Control to play the sequence of notes and trills of the bird’s adult song.

Young male zebra finches spend their lives perfecting their boisterous mating song, which sounds a bit like a droid from Star Wars. Young birds learn by trial and error to produce an accurate cover of their father’s mating song, but as adults they are not above tweaking a phrase or two in their efforts to impress potential mates, or as needed to adjust their technique for growth, age or injury.

Doupe’s previous research revealed that the avian equivalent of the human basal ganglia plays a crucial role in the creative experimentation required for song learning. When researchers block the output of the basal ganglia, young birds never develop a mature song, and adults lose the ability to adjust and maintain their song based on experience.

Doupe’s work also found that the creativity engine of the basal ganglia is more active when birds practice their songs alone, injecting variability into the song motor circuit to let the birds try out new notes and modified motifs. But when a pretty female shows up, the researchers found, the creativity circuit shuts down to let the bird reliably produce the best, most tried-and-true version of its song. The basal ganglia also are needed to lock in any change to a new part of the song that the bird is practicing.

Researchers trying to understand how the basal ganglia’s instructive signals enable trial-and-error learning have been perplexed by their unpredictable timing. Unlike the brain region that acts as a conductor for the bird’s song, which issues bursts of activity precisely timed to initiate specific notes and motifs, the timing of the basal ganglia’s signals, when they chime in at all, is off-beat and hard to predict.

“On the one hand, if there’s no variability, there’s no trial-and-error learning,” said Mehaffey. “If the bird can’t explore, it will never find a better version of its song. On the other hand, this variability has confused a lot of us, because if the bird needs to modify a specific note’s pitch, the signal needs to be very precisely timed.”

The new paper, which appeared online August 3 in the journal Nature Neuroscience, is the first to examine in detail the synapse-level learning rules that could allow the basal ganglia’s variable signals to modify the motor plan controlling the bird’s song.

Using brain slices containing the region where inputs from the basal ganglia and the song motor pathway converge to control the bird’s song performance, Mehaffey electrically stimulated the two pathways to show that the relative timing of their signals – one for “creativity” and the other encoding the established song – can lead to synaptic changes that either put the basal ganglia temporarily in the driver’s seat or hand the reins back to the learned motor plan.

Further research in live animals suggested that the same synaptic learning mechanism may be necessary for adult birds to modify their songs based on experience. The scientists exposed birds to an irritating burst of static tied to the pitch of a specific note in their songs. Typically, birds quickly learn to modify this note to avoid the burst of noise, but when the researchers gave the birds a drug that specifically blocks the timing-dependent plasticity mechanism in brain slices, the birds lost the ability to alter their song.

Mehaffey credits Doupe’s thorough knowledge of songbird behavior and neurology with the success of the experiments, which depended on using electrical stimulation patterns that mimicked the naturalistic patterns of activity observed in the bird brain during song.

“She deeply understood this system and encouraged her students and post-docs to pursue every imaginable method to examine what she thought was an important question,” Mehaffey said. “She was fearless in that regard.”

Mehaffey and others in the Doupe lab are now working to learn how specific changes to the song are represented at the synaptic level and how a bird integrates these changes into its standard song. Understanding these questions has the potential to teach researchers how the basal ganglia and cortex interact in humans to produce fine motor learning, and how it malfunctions in disease. First-generation drugs for basal ganglia disorders have mainly involved shutting the whole thing down, Mehaffey said.

“When it’s malfunctioning, you’re better off without it, and that goes for birds and humans,” he said. “But it would be nice to get to a point where we understand the system enough to start being able to actually go in and fix what’s broken.”

Funding for the research was provided by the National Institutes of Health, a NARSAD Distinguished Investigator Award and fellowships from the Canadian Institute of Health Research and the Grass Foundation.