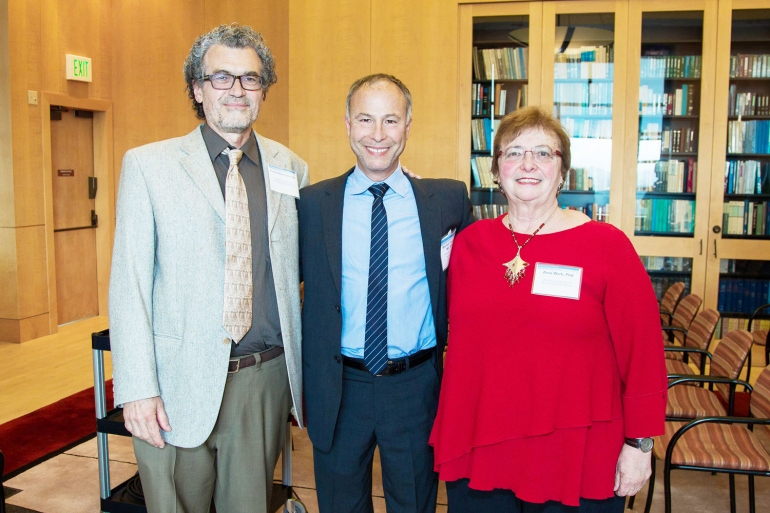 Winners of the 2015 Lifetime Achievement in Mentoring Award, Eliseo Pérez-Stable (left), MD, and Zena Werb (right), PhD, pose with Mitchell Feldman, MD, MPhil, director of the Faculty Mentoring Program, at a reception in the UCSF Library. Photo by Susan Merrell

A good mentor can influence a faculty member’s career development and research in life-changing ways. To recognize the contributions mentors make,  the Campus Council on Faculty Life presents an annual award to senior UCSF faculty member who best embody the principles of mentorship.

This year, two faculty members were honored with the Lifetime Achievement in Mentoring Award: Eliseo Pérez-Stable, MD, professor of medicine and chief of the internal medicine division, and Zena Werb, PhD, professor and vice-chair of the Department of Anatomy.

Both honorees shared some aspects of what the idea of mentorship has meant to them throughout their careers.

Eliseo Pérez-Stable listens with his family to a tribute to his mentoring work during the July 8 mentoring award ceremony. Photo by Susan Merrell

Eliseo J. Pérez-Stable came to UCSF as a resident in internal medicine in 1978. In addition to his internal medicine practice, he researches health and health care disparities in tobacco use and cessation, cancer prevention and aging.

Do you have any particular mentors who played a role in your own career?

During six weeks of my internal medicine rotation in medical school, I had the privilege of learning from a master clinician, the chief of service on the Miami VA wards: my father. It was probably one of the most important and steep learning curves that I ever experienced. I don’t think I really appreciated the effect it would have on my long-term approach to teaching, clinical care and mentoring.

What qualities do you think a good mentor should have?

You have to be generous with information, opportunities and resources and also rigorously push mentees to produce quality work. And I like the humility of it: Being open to learning from mentees, rather than always looking for opportunities to advance our own work.

What is your favorite memory of being a mentor?

About 20 years ago, one of our pediatrics faculty approached me and said she wanted me to mentor her in her research. I looked at her perplexed and said, “But I am a general internist, I don’t know anything about little people.” I wasn’t even a parent yet. But that relationship ended up working well and it opened a door for me: as long as you understand the scientific methods, you can help or guide people even if they are not in your field. It’s fine if you only work with people who do what you do, but you limit yourself. 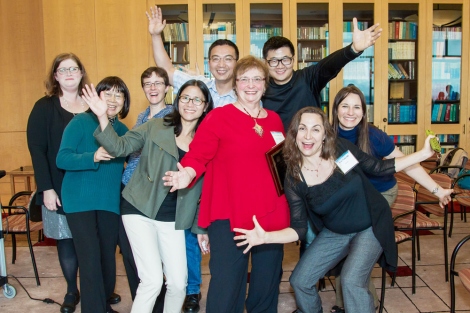 Zena Werb poses with her lab staff after receiving the Lifetime Achievement in Mentoring Award. Photo by Susan Merrell

Zena Werb arrived at UCSF as an assistant professor in 1976. She runs a research lab that studies how cells communicate and interact with one another, and what role those processes play in normal and diseased cells.

What drew you to mentoring?

I think I was always a mentor. In high school in rural southern Ontario, I tried to convince friends to think about going to college to have more opportunities than maybe their families had been offered, as they were mostly refugees from Europe after World War II.

As an undergraduate and graduate student, many of my fellow female students felt a lot of prejudice against women in science. I tried to get them to not worry about how people saw them but worry about how they saw themselves. And I kept doing that, especially once I became a faculty member. I feel that what we have to do is give people—men, women, minorities, it doesn’t matter—the opportunities to do the best they can for themselves.

As a mentor, is there any general advice you would like to pass on?

Bad things are going to happen throughout anyone’s career, but you can’t let yourself be derailed. Don’t spend all your time focusing on negative issues, such as being discriminated against, not being promoted, etc. What you have to do is remember those times, but move on. Many of those things that seemed negative can turn out to have sent you in a direction that was the best thing that could have happened.

In your years of mentoring, is there a particular experience that was unexpected?

A surprise to me was after I received this award, several people congratulated me and thanked me for being their mentor. But I never would have put them on a list of people I had mentored! I interacted with them, telling them what I thought they should know without considering it “mentoring,” just because it felt like the right thing to do.