Tejal A. Desai, PhD, professor and chair of the Department of Bioengineering & Therapeutic Sciences, was awarded the 2015 Brown Engineering Alumni Medal (BEAM) from Brown University’s School of Engineering at an Awards Dinner on May 23, in recognition of her career achievements in the field of engineering. She was honored in Alumnae Hall at Brown University, in the presence of many friends, colleagues, former professors, and her husband Dr. Sanjay Saxena. 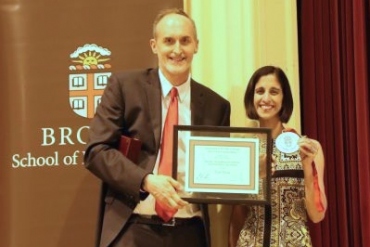 Tejal A. Desai received the 2015 Brown Engineering Alumni Medal (BEAM) from Brown University’s School of Engineering at an Awards Dinner on May 23. Photo by Gordon Morton

Desai is an acknowledged world leader in therapeutic microscale and nanoscale technologies and is at the forefront of engineering the next generation of drugs, using the tools of semiconductor manufacturing from Silicon Valley to make miniscule medical devices that deliver a drug or multiple drugs directly to specific areas of concern. Results from her lab include the use of silicon nanowire coated silica beads as adhesive drug-delivery vehicles, especially to the human gut, the micro/nanoscale cage or biocapsule for controlled drug delivery, and nanostructured thin-film devices for controlled ocular drug delivery.

An elected fellow of the American Institute of Medical and Biological Engineering (AIMBE) and the Biomedical Engineering Society, Desai is also a recipient of the prestigious Paul Dawson Biotechnology Award from the American Association of Colleges of Pharmacy (AACP). Early in her career, she was selected as one of the “Brilliant 10” Top Scientists in the Nation by Popular Science, received the Visionary Science Award from the BioMEMS and Nanotechnology Society, and the Global Indus Technovator Award from MIT.

The Brown Engineering Alumni Medal was established in 1997 as part of Brown’s celebration of 150 years of teaching engineering and as a means of recognizing distinguished Brown University engineering alumni. The medal is awarded to School of Engineering graduates who have established exceptional records of accomplishment in their engineering careers. A committee, composed of faculty members and previously chosen medalists, selects the new medalist. The medal, made of silver, was designed by Walter Feldman, Professor of Art, Brown University.

Desai is a member of the California Institute for Quantitative Biomedical Research, a principal investigator of the UCSF/UC Berkeley Graduate Group Training Grant in Bioengineering, and founding faculty director of the UCSF/UC Berkeley Master’s in Translational Medicine. Prior to joining UCSF, she was an Associate Professor of Biomedical Engineering at Boston University and Associate Director of the Center for Nanoscience and Nanobiotechnology at BU. She received the ScB degree in Biomedical Engineering from Brown University in 1994 and the PhD degree in bioengineering from the joint graduate program at University of California, Berkeley and the University of California, San Francisco, in 1998.