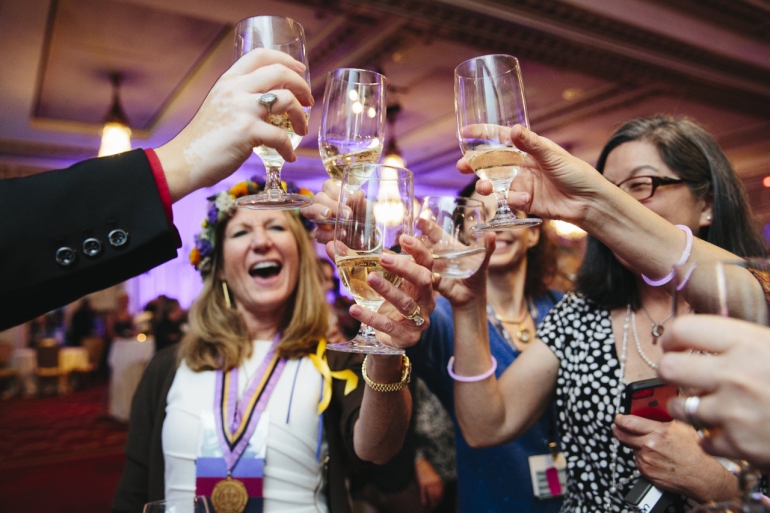 UCSF alumni toast the beginning of Alumni Weekend at a kickoff wine tasting event on May 29.

With UC San Francisco’s distinguished alumni spread all over the world, it’s not unusual for the community to converge in San Francisco for this annual reunion. This year, with the culmination of the yearlong 150th Anniversary celebration, it was all the more reason for 2,000-some alumni and friends from 34 states and six countries to return to their alma mater.

As part of UCSF’s 150th anniversary celebration, the Alumni Association of UCSF honored 150 of the most outstanding living alumni of UCSF's four professional schools – Dentistry, Medicine, Nursing, and Pharmacy – and the Graduate Division, and training programs with Alumni Excellence Awards to acknowledge the recipients’ distinction in the major components of UCSF’s mission: education, patient care, research and service – as well as business and industry. The recipients ranged in age from 35 to 104 years.

Joyce Lee, PharmD ’06, the youngest recipient, was among the alumni who traveled the farthest for Alumni Weekend – from Singapore, where she’s lived since 2007, to accept an Alumni Excellence Award at a May 29 reception.

“I was very thrilled to receive this once in a lifetime award,” said Lee. “I wanted to accept the award in person because it was really my education at UCSF that provided me the foundation to survive in Singapore, where I faced many challenges.” 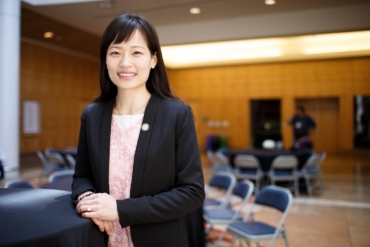 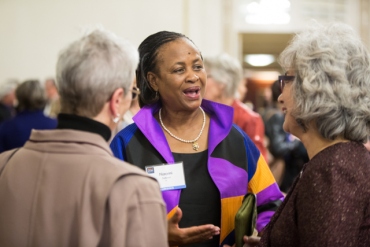 Naomi Seboni, PhD, catches up with mentors and former colleagues at the Nursing Gala dinner. Photo by Elisabeth Fall

One year after Lee graduated from UCSF, Lee accepted a position at the National University of Singapore, where she is currently a tenured associate professor and clinical pharmacist in ambulatory care. Lee started the first diabetes clinic run by pharmacists in Singapore, which has expanded to include six other clinics. She has trained numerous pharmacists to be directly involved in patient care, and publishes her research findings, including a study that came out this month, in which she found that fasting during Ramadan can help to improve blood sugar levels in people with type 2 diabetes.

Another Alumni Excellence award recipient, Naomi Seboni, PhD ’93, traveled more than 10,000 miles from Botswana to accept her award. Seboni earned her PhD in nursing at UCSF and has focused on adolescents’ health and development, including sexuality and sexual risk-taking behavior, living with HIV/AIDS, and the experiences of orphans and other vulnerable children.

“UCSF prepared me very well for my research, in methodologies and exposed me to other students from different parts of the world, who I continue to be in touch with in my career,” she said. “I was excited to return to San Francisco to reconnect with some of my colleagues and mentors.”

Seboni is currently the global president of the International Planned Parenthood Foundation, as well as the coordinator of the World Health Organization Collaborating Centre for Nursing and Midwifery Development for Sub-Saharan Africa, based the University of Botswana.

“When the chancellor was speaking about one of UCSF’s missions to provide services to people who are marginalized and people who are underserved, that really resonated with me as it fits very well with what I do,” she said. 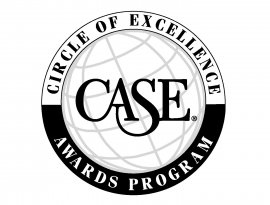 UCSF Chancellor Sam Hawgood, MBBS, provided a campus update at the Chancellor's 150th Anniversary Breakfast for more than 500 alumni at the Palace Hotel on May 30. The breakfast also introduced Harvey Brody, DDS '63, who has been appointed to serve a two-year term as alumni regent-designate to the UC Board of Regents, effective July 1. The event featured a roundtable discussion moderated by Dean Emerita Mary Anne Koda-Kimble, PharmD '69, with UCSF Nobel laureates J. Michael Bishop, MD, and Elizabeth Blackburn, PhD, who were joined by Lloyd Hollingsworth (Holly) Smith, Jr., former chair of the Department of Medicine and associate dean emeritus of the UCSF School of Medicine.

Seeing Bishop again was a primary draw for Judy Forbes, MD, ’75, to travel from her home in New Zealand for Alumni Weekend. Bishop was a lecturer during Forbes’ medical school classes. “Imagine having someone like that standing in front of your classroom in your first and second years,” she said. “We were so lucky.”

After training in and practicing anesthesia in the Bay Area for 10 years, Forbes moved with her husband and six children to New Zealand. She has spent the last 20 years or so teaching and delivering anesthesia in some of the most challenging conditions on the planet: in war zones, with United Nations peacekeeping forces, Doctors Without Borders and teaching organizations in Afghanistan, Pakistan, Bangladesh, a dozen African countries, and all over southeast Asia.

Forbes said she thought twice about coming to the reunion, given her small window of availability between work she just completed in South Sudan and work she is starting in Papua New Guinea. “But my dear classmates nominated me for an award,” said Forbes, who was named Alumna of the Year for the Medical Alumni Association. 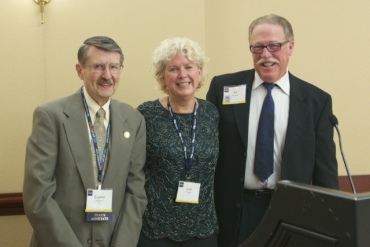 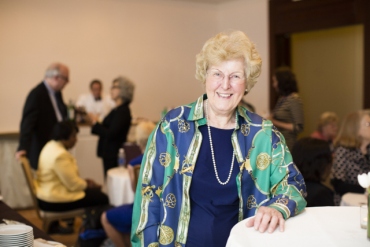 “My class was a very interesting class, as admissions had really mixed things up in 1971, doubling the number of women accepted and including many people of different races,” she said. “Even 40 years after I have graduated, and 30 years of living abroad, these are still some of my best friends.”

Hanneke (Johanna) Van Maanen, PhD ’85, traveled from her home in the Netherlands to attend Alumni Weekend, and was initially disappointed that none of her own fellow classmates made it there. “But during these days, I have met many interesting people from other disciplines,” said Van Maanen, who sat near a group of pharmacy alumni at the Chancellor’s Breakfast.

As a nursing student, Van Maanen balanced her scientific work at UCSF focused on gerontology with practice in the Tenderloin through participation in a UC Berkeley community empowerment program serving the elderly and disadvantaged (she earned her MPH degree at UC Berkeley concurrently with her nursing degree).

She spent her career focusing on “healthy aging” at the University of Toronto and the University of Bremen in northern Germany, where she set up the first academic program there for hospital-trained nurses to become educators. After she retired, she has continued to be active in international nursing, including setting up a nursing science program in Bulgaria to help empower nurses in that country’s heavily medicine-dominated healthcare system.

Van Maanen said that she decided to attend the reunion before she even knew the exact date. She just wanted to be part of the 150th-year celebration.

“I am very thankful for the outstanding education at UCSF and I fondly remember the valuable contacts with academic staff and the international community of students,” she said. She took full advantage of all of the activities, attending receptions and attending seminars and a tour of the Mission Bay campus.  “The advances at UCSF are remarkable, the collaboration between the faculties exemplary for a comprehensive delivery of health services,” she said. “It was just really good to be back.” 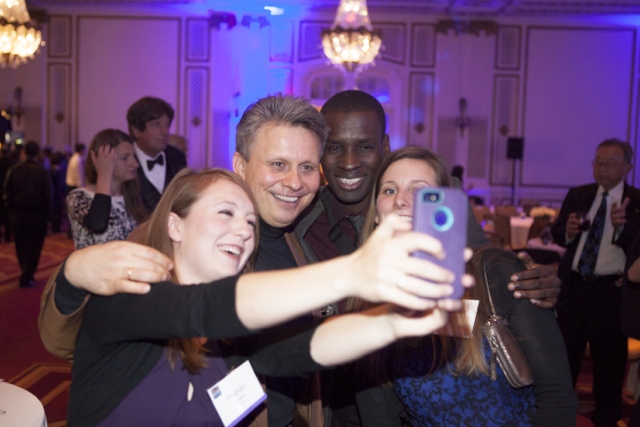 Postdoc alumnus and Graduate Division Alumni Association board member Igor Mitrovic, MD, and some of his students huddle close for a selfie.