One of the more famous images in biology is known as "Photo 51," an image of DNA that chemist Rosalind Franklin and Raymond Gosling created in 1952 by shooting X-rays through fibers of DNA and analyzing the patterns they left behind on film. 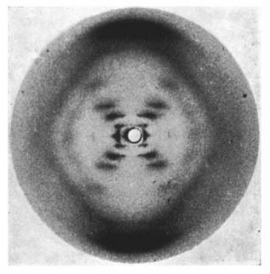 X-ray diffraction image of the double helix structure of the DNA molecule, taken in 1952. The image, famously known as "Photo 51," led to greater understanding of DNA and gave rise to the field of molecular biology. Image by Raymond Gosling/King's College London

For much of the 20th century, this method of analyzing X-ray diffraction patterns has been the standard for determining the 3D structures of proteins, generally using a technique known as X-ray crystallography. But this method relies on getting proteins to pack tightly together to form uniform crystals, which is notoriously difficult, especially when it comes to the floppy, dynamic proteins that live in cell membranes.

Yet biologists are particularly interested in these membrane proteins because the membrane is the cell’s dock, its security checkpoint, its mailbox. From sugars to viral invaders to nerve impulses, all cellular traffic passes through the cell membrane, and likely interacts with the proteins embedded there, such as neurotransmitter and hormone receptors.

To understand all that transpires at the membrane, biologists need to zoom in to the atomic level. The proteins’ resistance to crystallization, therefore, left scientists in a bind.

Now, after decades of challenges, scientists have developed an imaging technique that allows them to visualize these tiny membrane proteins thousands of times smaller than the width of a human hair – and to do so without first having to form crystals.

Known as single-particle cryo-electron microscopy, or cryo-EM, the technique had largely been written off as useless for determining the structure of very small proteins. But technological refinements made over the past several years at UC San Francisco and other institutions have made cryo-EM a key tool in structural biology. 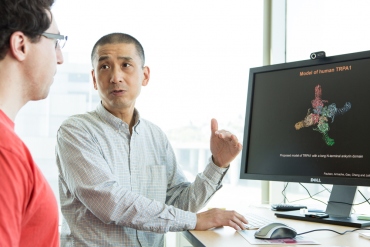 Yifan Cheng, PhD, discusses tweaks to the software that builds the 3D structure from the cryo-electron microscopy images with postdoc Jean-Paul Armache. Photo by Elisabeth Fall 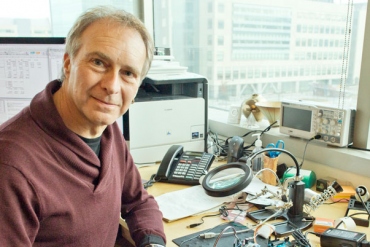 David Agard, PhD, in his office at UCSF Mission Bay

“Cryo-EM has made this marked jump in the last three or four years in terms of resolution, so that we can go from just seeing the general outline of a protein, what people used to refer to as ‘blob-ology,’ and now see, actually, the atomic structure,” said David Julius, PhD, professor and chair of UCSF’s Department of Physiology.

Julius collaborated with Yifan Cheng, PhD, associate professor of biochemistry and biophysics, to use cryo-EM to visualize the structure of the body’s receptors that sense the spiciness of chili peppers and, in work reported last month, wasabi.  These receptors are also involved in how the body signals pain – and the findings are already being used to test new pain drugs that bind to these receptors.

“By being able to really determine a molecule’s atomic structure, you can understand how it works in detail, you can make connections between the biology and chemistry, and it also provides capability for drug discovery and design,” said David Agard, PhD, professor of biophysics and biochemistry and a Howard Hughes Medical Institute (HHMI) investigator, who worked with Cheng to create better cameras and software for cryo-EM.

“So it’s really a huge change in what’s possible.”

Yet for a long time, scientists didn’t believe electron microscopy would be useful for imaging proteins and other biological samples at all.

The problem was that electron microscopes work by shooting electrons at the speed of light through a biological sample suspended in a vacuum; this process often destroyed the raw biological samples researchers were trying to see.

Then in the 1970s and 1980s, researchers at Heidelberg’s European Molecular Biology Laboratory and Lawrence Berkeley National Laboratory developed a way to protect samples and also keep them in a dissolved state similar to how they live in the cell: they rapidly freeze the purified biological samples in a very thin layer of liquid.

Yet even when frozen at around -300 °F, the tiny proteins still moved when hit by the powerful stream of electrons. So scientists turned to using very low electron doses – analogous to taking a photo in very low light – which minimizes the damage but leaves the image grainy. 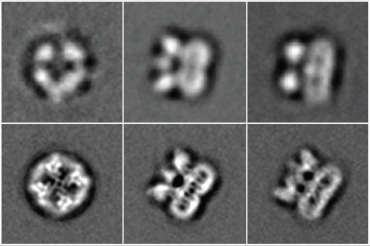 To reduce this blur, the team developed a new camera that records a movie of the wiggling sample under the microscope. At 400 frames per second, the recording provides enough data so the motion correction software developed in Cheng’s laboratory can correct for the molecular motion and effectively “unblur” the image.

Another challenge was that earlier digital cameras used in cryo-EM detected light, not electrons. So when the electron passed through the sample the signal had to be translated into light signals, and resolution was lost in the process.

“This combination of the bad detector, blurring from the motion and radiation damage, where the sample was being destroyed by the electrons, made it all a very difficult process,” said Agard.

To circumvent the problem of translating electrons into light, Cheng and Agard brought together a team and developed a camera that detects electrons directly. The researchers collaborated with the electron microscopy company Gatan and scientists at Lawrence Berkeley to build a new detector called the K2 Summit, named after one of the most challenging mountain ascents in the world.

The World at Near-Atomic Resolution 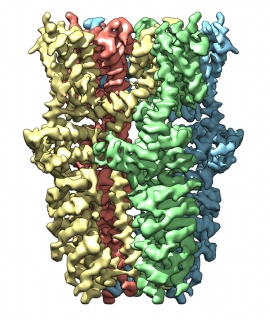 Using cryo-EM, UCSF researchers created this animation based on actual images of TRPA1, or the "wasabi receptor," which senses both the active chemical in wasabi and the body's pain signals. Image courtesy of Cheng lab

In 2013, Cheng and Julius reported that they had used this new camera to achieve near-atomic-level structure of the capsaicin receptor, TRPV1, which detects the heat of chili peppers. Cryo-EM had previously been used to examine larger structures, like ribosomes and viruses, but this was the first membrane protein to which the technique had been applied.

“A small thing like a TRP channel, that was a real revelation,” said Nikolaus Grigorieff, who does cryo-EM research at HHMI’s Janelia Research Campus, in Virginia.

Earlier this year, Cheng and Julius determined the structure of another key protein receptor, TRPA1, involved in how the body signals pain. There will be many revelations to come. “The future’s very exciting, for sure,” said Cheng. “This opens up tremendous opportunities for the field to tackle many challenging problems in structural biology.”

The resolution of cryo-EM as used by Cheng and Agard is currently about 3 ångströms; for reference, an ångström is about one-millionth the width of a strand of hair. Cheng and Agard would like to take it down to 2 ångströms, which would allow them to see not just membrane proteins but also the way that molecules, such as new therapeutics, might bind to them.

Cheng plans to use cryo-EM to examine the same molecule that Watson, Crick, and Franklin probed over 60 years ago – DNA – and, more specifically, chromatin, the term for DNA in complex with its associated proteins.

"These are extremely difficult targets for X-ray crystallography, and I anticipate that cryo-EM will also play a significant role in this area."