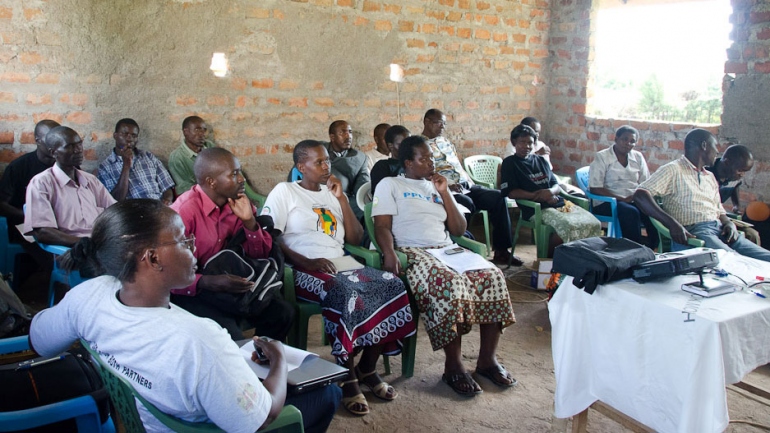 A team led by researchers from UC San Francisco, Organic Health Response, and Microclinic International is reporting results of a study that showed significant benefits of microclinics – an innovative intervention that mobilized rural Kenyan HIV patients’ informal social networks to support their staying in care.

The results showed that microclinics cut in half the normal rate of disengagement from care, which was defined as missing a clinic appointment by 90 days or more, when compared to the control group, and reduced the perceived stigma of HIV by 25 percent within the larger community.

“When HIV patients fall out of care, they lose access to their medications, and untreated HIV patients will eventually develop AIDS. Keeping patients in care is not only a challenge in resource limited settings, but even in the U.S. where the CDC estimates that only 40 percent of HIV patients are regularly engaged in care,” said the study’s lead author, Matthew D. Hickey, a graduating UCSF medical student who will be starting residency in UCSF’s internal medicine/primary care program at San Francisco General Hospital and Trauma Center.

“Microclinics are a novel approach in solving this problem, he said, “in large part because they directly and innovatively address the issue of stigma.”

The research is available starting May 12 online ahead of print in the Journal of Acquired Immune Deficiency Syndromes.

The intervention took place on Mfangano Island in Lake Victoria, which is surrounded by the countries of Uganda, Kenya and Tanzania. The island has a population of about 21,000 living in small villages of 500 to 1,500 people. Almost 30 percent of the population is HIV infected. FACES (Family AIDS Care and Education Services), a joint program of UCSF and the Kenya Medical Research Institute, has been supporting HIV care, treatment and prevention in western Kenya, including the island, in collaboration with the Kenya Ministry of Health since 2004.

FACES researchers and clinicians partnered with Microclinic International and the Organic Health Response to assess whether its social network model would help retain HIV patients in care. The Microclinic Social Network Model works with individuals and communities to identify existing social networks and use those to address wide spread and deadly diseases in communities. The Organic Health Response coordinates a solar-powered community center on Mfangano Island that served as the headquarters for this intervention. 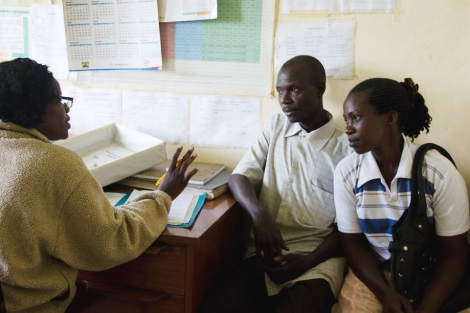 A couple consults with a health care provider at a FACES clinic. Photo by Rachel Burger

“The rural communities on Mfangano Island where we are working have tremendous stores of social capital.  People help each other when an individual or family is in need. If someone gets sick or injured, needs help farming or getting together the money for school fees, friends and family pitch in to help. But, that often was not true when the need was due to HIV. For example, a breadwinner became sick with AIDS and everyone knew what was going on, but no one talked about it. He fell through the cracks of his social network, and without support, he was lost to care and did not manage to take his medications faithfully. Eventually, he died of AIDS,” said study co-lead author, Charles R. Salmen, MD, MPhil, the founding director of Organic Health Response.

The intervention was introduced into one set of communities served by the Sena Health Center; other similar neighboring communities in the clinic’s catchment area served as controls. Patients on antiretroviral medications were invited to form microclinic groups. These groups included five to 15 family members, close friends or other members of the patients’ social network, regardless of HIV status. Pre-existing social groups such as churches, soccer teams and money lending clubs were also invited to form microclinic groups and participate. Each microclinic group was assigned a community health worker and a facilitator. All participants received confidential HIV testing and counseling.

“Microclinics are not a traditional support group composed of people confronting a similar challenge, many of whom may not know each other. Instead, microclinics use organic networks to drive positive behavior. And since patients receive support from existing networks, support is sustained,” said study co-author Daniel Zoughbie, MSc, DPhil, chief executive officer of Microclinic International.

The participants attended 10 group-discussion sessions over five months. The sessions educated participants about HIV prevention and treatment, promoted group support through discussions about confidentiality and HIV status disclosure, encouraged group support to assist in taking anti-HIV medications faithfully and making clinic appointments, and encouraged participants to outreach to the community to promote HIV testing and clinic enrollment. At the end of the intervention, participants were invited to take part in voluntary group HIV testing.

“Previously, stigma blocked access to social support because patients didn’t disclose. Microclinics opened up discussion and became the catalyst for destigmatizing HIV. This led to access to support within social networks. Friends and family supported patients in getting to clinic appointments and, in turn, expected appointments to be kept. They supported patients’ taking medications as directed and expected patients to take them. Silence was replaced by active support,” said Hickey.

“UNAIDS has set a goals aiming to have 90 percent of people with HIV in the world successfully treated and retained in care by 2020. The microclinic intervention, which redefines the unit of care from an individual to an individual and his/her social network, is a cost effective, scalable initiative that could help governments meet their targets,” said study co-author, Craig Cohen, MD, MPH, UCSF professor of obstetrics, gynecology and reproductive sciences.

UCSF researchers are affiliated with the AIDS Research Institute (ARI) at UCSF, which houses hundreds of scientists and dozens of programs throughout UCSF and affiliated labs and institutions, making ARI one of the largest AIDS research entities in the world. UCSF ranks #1 among medical schools in the U.S. for its AIDS programs according to U.S. News & World Report, as it has every year since the category was created in 2001.