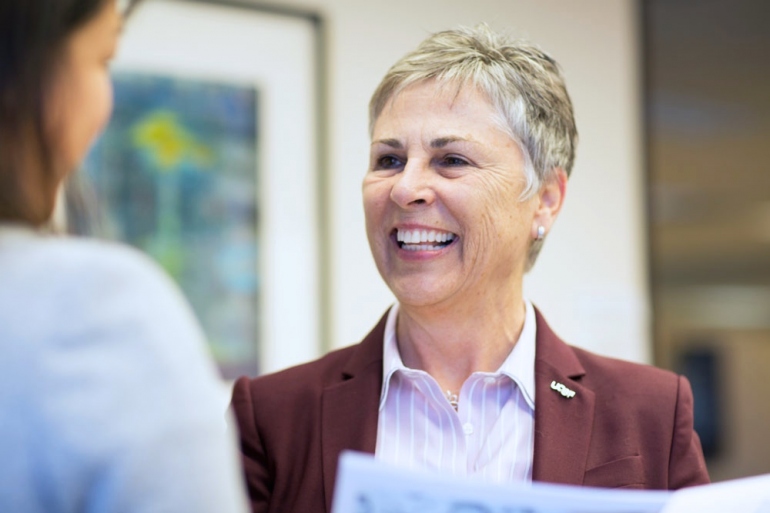 Barbara French, vice chancellor of strategic communications and university relations at UCSF, confers with a colleague. Photo by Elisabeth Fall

Barbara French has fond childhood memories of traipsing around her hometown of San Bruno with her friends. As an eight-year-old, she was somewhat of a Pied Piper, leading a row of kids who would follow her during these excursions. Typically there was no one in front of her.

“And to this day, my friends tease me because if we’re in the car and I’m giving directions, everyone will say, ‘You said that so definitively, but do you know where you’re going?’” said French, UCSF’s vice chancellor of strategic communications and university relations.

Her leadership qualities helped French advance in her career, and also caught the attention of the San Francisco Business Times, which named her to its list of “Most Influential Women in Bay Area Business” on May 1.

“I appreciate this recognition, but honestly believe it speaks just as much, if not more, to the high regard with which UCSF is held in San Francisco and throughout the Bay Area,” French said. “Everything I do – and our team here in University Relations does – is on behalf of advancing the work of UCSF faculty, staff and students.” 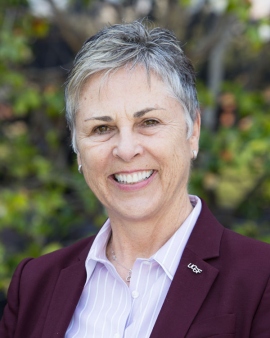 French credits Terry Christensen, a political science professor emeritus at San Jose State University, who became a mentor during her undergraduate years, for sparking her interest in local politics.

“That’s when I really started seeing leadership as an ability to unite people around a common goal and vision,” French said. “And then provide them with the tools to do their job.”

She describes herself as a shy person by nature. In high school, she chose journalism as a future career because it allowed her to meet interesting people and ask detailed, insightful questions. French began observing human characteristics and became interested in the attributes associated with successful leaders.

“And then I started realizing that, for me, journalism had its drawbacks. As a reporter, I would report on what other people were doing. I realized that I wanted to be one of those people who helped to make things happen,” French said. “I’m intrigued by strategy and communication, and I enjoy working on a team.”

That’s when she discovered public affairs. Along the way, she created a PR firm and fell in love with the notion that she could do communications strategy while leading a team.

In 2004, French got a call from UCSF asking if she was interested in applying for a leadership position, heading up communications and community and government relations under then Vice Chancellor Bruce Spaulding.

“I talked to a slew of people about the job and what struck me was the passion people had for UCSF,” French said. “Having my own public affairs consulting business and working with a lot of private developers, the motive was typically money, and what charmed me about UCSF was that the motive was the mission.”

French joined UCSF in 2005 and, in the 10 years that she has lead communications and advocacy, she has emerged as a forward-thinking communications leader for the $5 billion enterprise, which includes four premier graduate schools of dentistry, medicine, nursing and pharmacy and a graduate division, a preeminent biomedical research enterprise and one of the nation’s top ten medical centers, including UCSF Benioff Children’s Hospitals.

The biggest change at UCSF during French’s tenure is the increased competitive nature of funding. UCSF competes for approximately 80 percent of its revenue, and is dependent on philanthropy more than ever to accomplish its mission.

“What that means is that we can’t be complacent,” French said. “UCSF has always been a humble place, a place that has taken great pride in its work, but a place that is very uncomfortable with declaring itself ‘the best.’ People here prefer their work to speak for itself.”

“What has been fun and challenging is the opportunity to raise awareness of UCSF among all the people we need to reach – patients, thought leaders, donors, peers, neighbors, students – and to do so in a way that truly represents the UCSF culture,” French said. “UCSF is making a tremendous difference. My job is to ensure that people have a high awareness of what we do so our faculty, staff and students receive the support they need to contribute even more.”

French says her recipe for success comes down to one fundamental truth: following your heart. “You have to find something you truly love, that truly inspires you,” she said. “You have to have a passion for something, a passion to make a difference. A leader is one who articulates a vision, who can attract good people, and who can inspire those people to go on to do amazing things.”