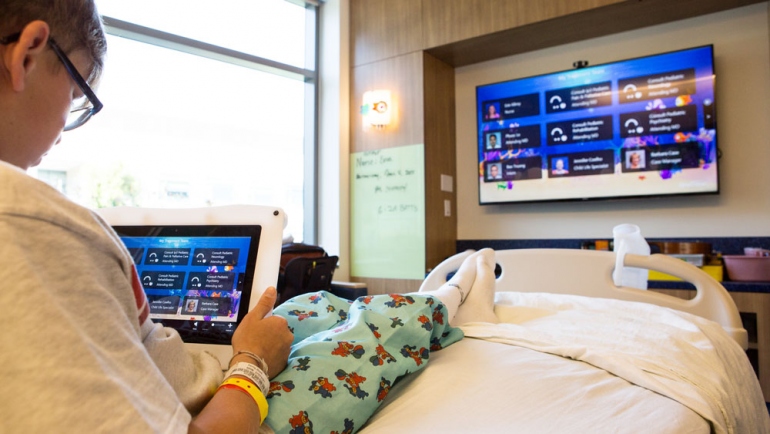 This isn’t a futuristically imagined hospital from “The Jetsons.” It’s all part of UCSF Medical Center at Mission Bay, where technological touches aren’t just making patients more comfortable – they’re freeing up care teams to focus more on health and safety. 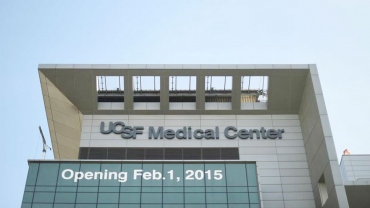 This state-of-the-art hospital complex was built with a focus on the patient experience every step of the way. Learn more

“When we first started planning the medical center 10 years ago, we focused on creating the most healing environment we could,” said Pamela Hudson, executive director of clinical systems at UCSF Medical Center at Mission Bay. In addition to designing rooms and technology for patients, “we really wanted to give our staff the mind space they needed to focus more on the patient.”

Outside hospital walls, texting phones and digital tablets are now the norm, but health care has been slower to adapt because of issues surrounding patient privacy and reliability of the communication device – especially when dealing with life and death.

Empowering Patients with a Screen Tap

Digital tablets can be handy during a hospital stay for entertainment between clinical check-ins, but a new bedside tablet system at UCSF is empowering patients to play an active role in their own care.

For 11-year-old Kellen Durham, he used the tablet’s private email app to send questions to his doctor, and order meals from another app pre-programmed to show only foods that met his specific dietary needs.

“Typically the staff would come in to talk about his specific question he would post using the tablet,” said Kellen’s mother, Ginger. “All his concerns were being addressed, and I think that made him feel like he was important in making his own decisions.” 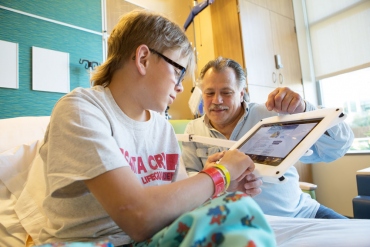 Brett Demy and his father Alan Demy check out the features of his bedside digital tablet. Photo by Elisabeth Fall

UCSF is among the first in the United States to implement this clinical communication system, developed by Oneview Healthcare.

“A big part of the new technology is to allow patients to have more of an interactive conversation with their care teams, and to be a part of their own care,” said Anson Daine, MSN, and a key member of the Mission Bay transition training team.

Kellen spent several weeks at UCSF Benioff Children’s Hospital San Francisco for treatment for chronic pancreatitis, which often left him fatigued. He turned to the technology to stay engaged, setting reminders in the goal-setting section of the app to brush his teeth or take a shower to give himself little prods on days he wasn’t feeling well.

“His ability to set goals for himself was also very empowering,” said Kellen’s mother. “He had a physical thing to look at, to check off, and that helped to motivate him to get out of bed and do other things.”

When he wasn’t working on those goals, she noted, he certainly enjoyed playing video games on the system too.

Other technology is more invisible to patients but has a real impact on how smoothly – and safely – the hospital runs.

The system recognizes the difference between non-emergency and other calls and texts the most appropriate person in the chain. “The system is triaging needs based on which button is pushed and sending the alarms to the appropriate person,” said Daine.

Making Pagers a Thing of the Past

The new alert system is tied into a bigger innovation: allowing patient care staff to finally evolve beyond 90’s-era pagers and securely communicate through calls and text. 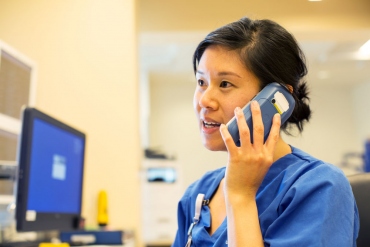 Melisa Hsu, RN, takes a call from a colleague on a cellphone running custom software to ensure reliable signals and patient privacy. Photo by Elisabeth Fall

Nearly all hospital staff carry a cellphone running software specifically designed by Voalte, a healthcare communication company. Unlike spotty cell coverage, the system runs on a robust wifi network that reaches almost every corner of the hospital and allows calls and texts to continue on elevators.

“This has been a runaway success story since the hospital opened,” said Daine.

Nurses now can text each other for help with a patient, to check on a transport team coming to move a patient, or to request a room cleaning. Even if staff members don’t know a specific name, they can request assistance by job description too – the system automatically directs the call or text to whoever is signed in under “Spanish translator” or “obstetrician.”

In an emergency, the system sends texts in addition to traditional alarms, and those texts can come in a full minute or more before the alarm sounds. For some, those seconds could make a big difference.

Raising the Bar with Robots

The new hospital complex is almost three football fields long, a serious distance for staff to push dirty linens, which can weigh more than a ton. 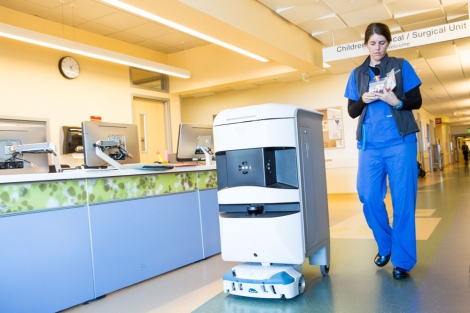 Enter the robot. A fleet of 25 robots, to be precise, and one of the largest hospital robot fleets in the world.

The robots can be spotted quietly whirring down the hallway at a human walking pace, waiting patiently for an elevator or pausing outside the operating room with surgical instruments after texting a nurse that his or her delivery is ready. Different bots transport medicines, meals, recycling and waste, surgical instruments and lab specimens.

Not only are the robots efficient; they also play a key role in hospital safety, Hudson said. “When you look at injuries to employees, especially at medical centers, they occur when they’re lifting large equipment or moving heavy linens,” she said.

Plus robots can lift, transport and deliver important specimens or medicines far more reliably and efficiently than humans. Medications, for instance, can only be accessed when a clinician enters a special code as well as his or her fingerprint.

“This allows them to spend more time right at the patient’s bedside, and not searching for a particular medicine, or worrying if a medicine will be delivered at the time the patient needs it.”

See the UCSF Medical Center robots in action in this video by CNET: