A research team led by UC San Francisco scientists has found the genetic signature of enterovirus D68 (EV-D68) in half of the California and Colorado children diagnosed with acute flaccid myelitis – sudden, unexplained muscle weakness and paralysis. Most cases occurred during a nationwide outbreak of severe respiratory illness from EV-D68 last fall, though the study includes patients from 2012 to 2014.

The finding strengthens the association between EV-D68 infection and acute flaccid myelitis, which developed in only a small fraction of those who got sick. The scientists could not find any other pathogen capable of causing these symptoms, even after checking the cerebrospinal fluid for every known infectious agent. 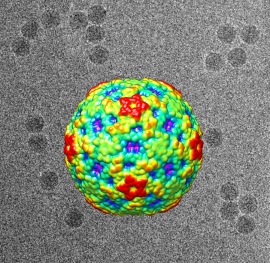 Researchers analyzed the genetic sequences of EV-D68 in children with acute flaccid myelitis and discovered that they all corresponded to a new strain of the virus, designated strain B1, which emerged about four years ago. It has mutations similar to those found in poliovirus and another closely related nerve-damaging virus, EV-D70.

Enterovirus Strain Was Circulating During Outbreak

The B1 strain was the predominant circulating strain detected during the 2014 EV-D68 respiratory outbreak, and the researchers found it both in respiratory secretions and – for the first time – in a blood sample from one child as his acute paralytic illness was worsening.

The study also included a pair of siblings, both of whom were infected with genetically identical EV-D68 virus, yet only one of whom developed acute flaccid myelitis.

“This suggests that it’s not only the virus, but also patients’ individual biology that determines what disease they may present with” said Charles Chiu, MD, PhD, an associate professor of Laboratory Medicine and director of UCSF-Abbott Viral Diagnostics and Discovery Center. “Given that none of the children have fully recovered, we urgently need to continue investigating this new strain of EV-D68 and its potential to cause acute flaccid myelitis.”

Among the 25 patients with acute flaccid myelitis in the study, 16 were from California and nine were from Colorado. Eleven were part of geographic clusters of children in Los Angeles and in Aurora, Colorado, who became symptomatic at the same time, and EV-D68 was detected in seven of these patients.

Eighty percent of the children reported having an upper respiratory illness about six days, on average, before their acute flaccid myelitis symptoms began. Slightly more reported having a fever, including all of the cases from the clusters in California and Colorado.

Samples were collected more than a week after the children began showing symptoms of an upper respiratory infection, and this likely made it much harder to find EV-D68. There may also be other reasons to explain why the virus was not found in cerebrospinal fluid in children with neurological symptoms.

“The lack of detectable virus in CSF could also mean that the neurological symptoms are coming from an aberrant immune response to recent EV-D68 infection and not because the virus is directly invading neurons,” said Chiu, senior author on the paper published March 30 in The Lancet Infectious Diseases.

This study was supported by grants from the National Institutes of Health, a University of California Discovery Award, an Abbott Viral Discovery Award and the Centers for Disease Control and Prevention Emerging Infections Program.