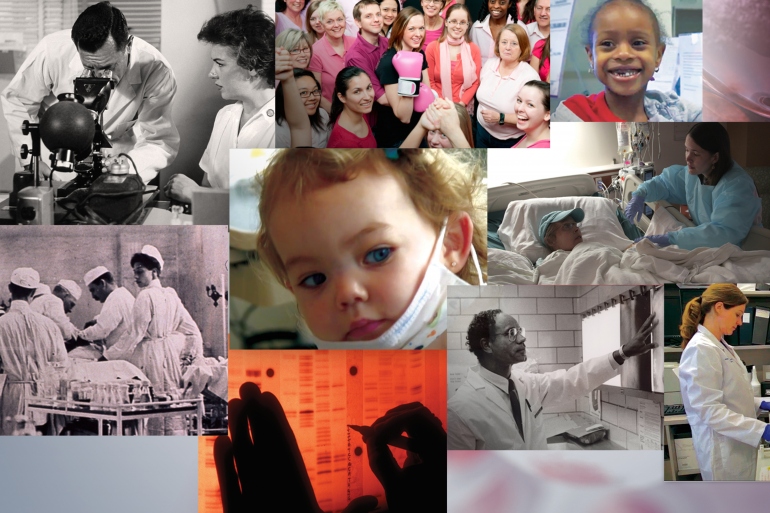 The Ken Burns-produced three-part PBS documentary called “Cancer: The Emperor of All Maladies,” will air March 30-April 1 on your local PBS station. Image courtesy of PBS and Ark Media

The documentary is based on the Pulitzer Prize-winning book of the same name by Columbia University oncologist Siddhartha Mukherjee, MD, PhD. It tells a comprehensive story of cancer, from its first description in an ancient Egyptian scroll, to Bishop and Varmus’ Nobel Prize winning discovery at UCSF regarding the genetic basis of cancer, to Desmond-Hellmann’s work at Genentech Inc. to bring two of the first gene-targeted cancer therapies to market, and beyond to the research coming out of state-of-the-art research institutions such as UCSF.

The six-hour film takes the viewers on a journey from the early days of cancer to the current era of precision medicine, which gives hope to breakthroughs thanks to advancements in genomics and big data research.Currently, about 14 million people globally are diagnosed with cancer annually, and 7.6 million die from the disease. Mukherjee, a hematologist and an oncologist, has been recognized for his work on the formation of blood and the interactions between the micro-environment and cancer cells. He says the disease may just be the “inherent outer limit of our survival.”

In 1976, Bishop and Varmus discovered proto-oncogenes – normal genes that can be converted to cancer genes by genetic damage. This revolutionary work led to the recognition that all cancer probably arises from damage to normal genes, and has laid the groundwork for new strategies for detecting and treating the disease.

Bishop went on to become Chancellor of UCSF, while Varmus went on to lead the National Institutes of Health and then Memorial Sloan Kettering Cancer Institute.

Desmond-Hellmann, a UCSF trained oncologist, was at Genentech in the 1990s while the company was conducting clinical trials for Herceptin for the treatment of breast cancer. She went on to become president of product development for the company 2004-2009, and played a key role in the development of the therapies Avastin and Herceptin. Desmond-Hellmann is now the chief executive officer of the Bill & Melinda Gates Foundation.

“The work of Bishop, Varmus and Desmond-Hellmann has had a tremendous impact on our understanding of cancer, and ability to target it,” said Alan Ashworth, PhD, FRS, president of the UCSF Helen Diller Family Comprehensive Cancer Center and senior vice president for cancer services at UCSF Health. Ashworth’s own groundbreaking work – co-discovering in 1995 the BRCA2 gene – had a significant impact on the field.

UCSF’s contributions have continued to rise to the top, as seen in 2009 when the Nobel Prize committee recognized Elizabeth Blackburn, PhD, for her co-discovery in 1983 of the telomerase enzyme which, when over activated, drives some cancers, and is thus a biomarker for cancer detection and a potential target for therapy.

The UCSF Helen Diller Family Comprehensive Cancer Center is one of the foremost cancer programs in the nation, housing an elite team of faculty investigators in laboratory, clinical and population-based research that spans all categories of cancer, both adult and pediatric, from prostate to brain and nervous system to breast cancer.