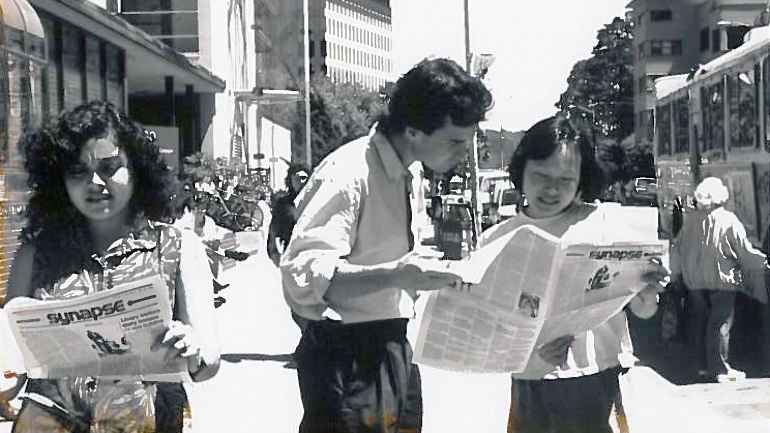 Students check out the latest news in this archival Synapse photo from April 1990.

UCSF health and sciences students in the 1950s may have been ahead of their time in recognizing the importance of communication and sharing ideas among scientists. That spirit of teamwork has kept the paper humming for nearly 60 years. It’s run by volunteers, students who are dedicated to “keeping this ‘city’ of 12,000 people in touch with one another,” as the Synapse staff wrote in 1990.

As a graduate-level institution dedicated to health sciences, UCSF has struggled with interprofessional communication, especially between its different schools. Students were stretched thin by demanding schedules, leaving little time for activities that didn’t seem essential. There was also no good way to learn about campus events or activities and few opportunities for interaction with students outside of one’s school.

In 1957, a group of entrepreneurial students created UCSF’s first school-wide newspaper, The Synapse, to remedy this problem. The paper was designed as a platform to bring attention to issues and discussions within UCSF and beyond.

“The purpose [of The Synapse] is to facilitate communication on the Medical Center Campus and to encourage creative expression of the Campus population,” declared the first Synapse constitution, published on April 25, 1958, echoing the sentiments of many editorials throughout Synapse archives.

Instilling a Sense of Community 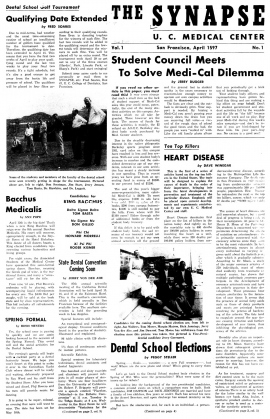 Click on the image to see the front page of the inaugural issue of The Synapse from 1957 (not 1597, according to the typo in the masthead!).

The Synapse grew out of a small newsletter called Hy-Dent, founded by students in the School of Dentistry in 1955. This dedicated group soon sought to expand their forum for communication to the rest of the UCSF community.

Appropriately, they named the new paper after the nervous system structure that allows signals to pass from a neuron to another cell, neuron or otherwise. In biology, the synapse is the place of information exchange that ultimately allows the body to act. Likewise, The Synapse has strived for nearly 50 years to be a place of information exchange between all students.

“I think we would benefit from campus unity [as] interprofessional associates in our common fields,” wrote Glen Cureton, Synapse editor, in an editorial from an early issue of The Synapse in May 1960. “Next year we will have graduation on this campus. How will you feel when your parent or relative inquires about the speakers from other schools and you must reply that you neither know, nor know of, them?”

"Synapse is my favorite source for news about the UCSF community,” said Noah Younger, a sixth-year MD/PhD student, when asked about his thoughts on the student newspaper in Fall 2014. “There's always an interesting story about something going on in a different department or different discipline that I wouldn't have heard of any other way."

A Platform for Science Communication

Beyond a venue for sharing news, ideas and events across campus, Synapse has evolved into an avenue for career exploration and a platform for science and health communication in the modern age. In recent years, in particular, the student newspaper has seen a surge in participation from the Graduate Division, as academic jobs become scarcer and instant online publication by non-scientists facilitates spread of public misinformation.

Synapse gives UCSF students key career development opportunities, allowing them to practice health and science writing and connecting their content to wider audiences.  Importantly, the newspaper also strives to provide a reliable and engaging source of scientific information to the community from people who are studying at the cutting edge of biomedical science.

“I joined Synapse in my first year of medical school,” said Theresa Poulos, now a fourth-year medical student who still writes monthly medical case vignettes and diagnoses in a column called “UCaSeFiles.” “It has been a wonderful outlet for me to explore both the campus and the city, and to share news and knowledge with the entire campus. Beyond that, it is a great way to maintain my writing skills while in medical school.” 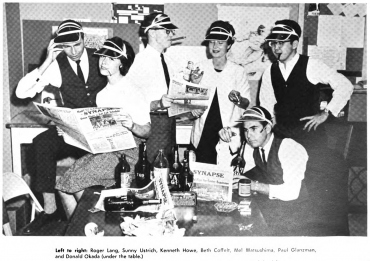 The Synapse staff ham it up for the camera in this 1964 newsroom photo.

“[Synapse] gave me the support to start the UCSF Journal Club column and eventually explore more journalistic writing,” she said. “Now, I publish my articles in Synapse because they provide me unique access to a large international audience through print and online… as I continue to develop my skill as a science writer.”

Through writing for Synapse, trainees have the opportunity to learn about new developments in science firsthand, interview prominent members of the scientific and medical community and learn how to conduct interviews effectively. 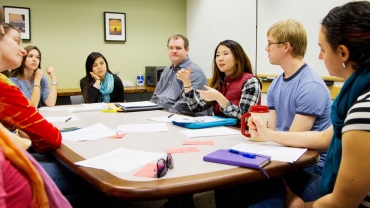 The 2014-15 Synapse staff discusses the next issue in its editorial meeting on Jan. 21. Photo by Susan Merrell

A key component of the group’s mission is communicating scientific innovation, so they asked Synapse editors to speak with attendees about the newspaper and give pointers on science writing. This event was so well-attended by graduate trainees that Synapse plans to expand its writing workshops to the entire UCSF community.

As technology increasingly influences both media and science, Synapse is responding by actively including more multimedia content.  By incorporating more images, videos and audio content to engage audiences, Synapse aims to increase student engagement and give students a more varied skill set within the realm of science communication – and to stay relevant in an ever-changing era of science and media.

Synapse Speaks to Startups is a new column that highlights local biotech and health startups written by Yarrow Madrona, a postdoctoral scholar.

Life of a Grad Student was a series profiling the incredible people working in UCSF laboratories by sharing their triumphs and tribulations, unique backgrounds and common experiences. Synapse is now expanding the “Life of a UCSF Student” series to all schools.

Humans of UCSF is a photo project that displays portraits of UCSF community members and a short story or quote. It aims to humanize the faces in the halls every day and to “get a glimpse of the diverse experiences of the UCSF community.”

The Office of Career and Professional Development  recently started a column to share their advice for students going through career exploration.