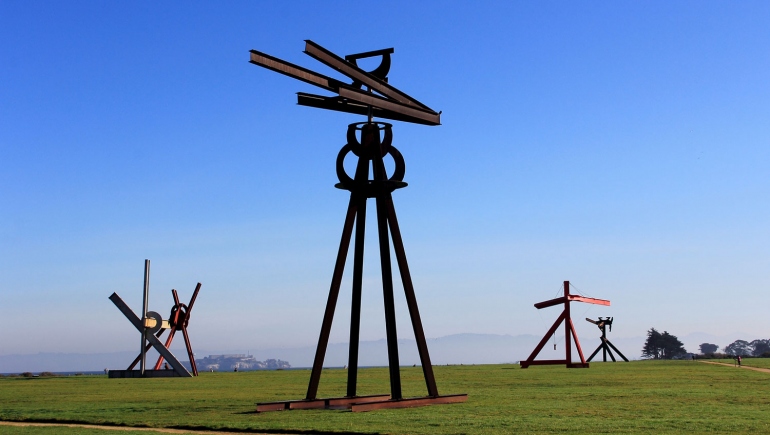 Jeanne Robertson was walking at Crissy Field this past spring, marveling at the massive sculptures set upon this stretch of land hugging the San Francisco shoreline north of the Presidio, and wondering about their fate.

The temporary sculpture garden featured creations by renowned artist Mark di Suvero. His works, found throughout the world, are distinctive for their huge, yet gracefully balanced pieces of steel, which while anchored to the ground seem to reach for the sky.

The exhibition Robertson was savoring, “Mark di Suvero at Crissy Field,” put together by the San Francisco Museum of Modern Art, was coming to the end of its yearlong run. When it did, would the pieces disappear from the San Francisco landscape forever? 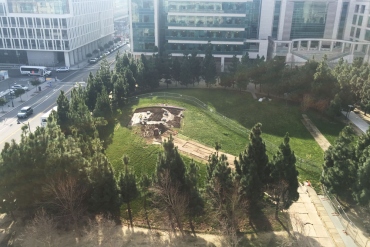 Fortunately Robertson and her husband, Sandy, lovers of world-class art, knew di Suvero, who has deep roots in the Bay Area and an active studio in Sonoma County.

The Robertsons have long been supporters of the UCSF Mission Bay campus and of UCSF’s commitment to public art. Jeanne Robertson began to explore the possibility of buying one of the works from the artist and donating it to UCSF, so that it could continue to be displayed publicly in San Francisco.

Thanks to the Robertsons’ generosity, "Dreamcatcher," a 50-foot-tall steel sculpture, will soon grace the campus, on the eastern side of the Koret Quad near Fourth Street.

“Sandy and I are very pleased to contribute this magnificent sculpture to UCSF,” Robertson said. "The name, Dreamcatcher, aptly describes the spirit of the innovative work of the scientists at Mission Bay.”

Jan. 10 update: The "Dreamcatcher" sculpture is now up at Mission Bay! Check out the slideshow at the bottom of this story to see the final steps of installing the piece.

Dreamcatcher is composed of symmetrical tilting beams that join together as they rise, topped by steel circles. Above them are additional beams, which fan out from one another like the fingers of a splayed hand and are free to turn in the wind on low-friction bearings.

While the sculpture, in 11 pieces, is in storage in an Oakland warehouse, preparation of the installation site already is under way, with completion and a ribbon cutting to celebrate expected in January.

Engineers worked with di Suvero’s team and determined that, unlike the buildings constructed on campus, the 16-ton sculpture does not need to be erected upon pilings for support. Instead, stability will be provided by a broad, concrete, raft-like foundation submerged beneath the ground, which will be less costly and time-consuming to build.

With the addition of Dreamcatcher, the campus will boast two monumental steel sculptures by two of America’s most celebrated contemporary artists – both of whom spent formative years in San Francisco. 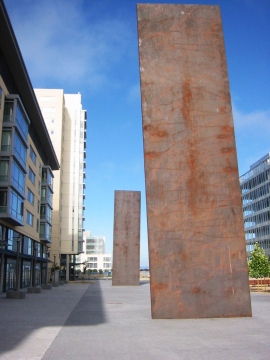 Richard Serra’s “Ballast” was installed in 2005 in the East Plaza at Mission Bay. It consists of two separate plates of steel – each nearly 50 feet high and 15 feet wide – tilting in opposite directions.

Another element these two works by these distinctive artists have in common, besides their massive size, is that both are constructed from Cor-Ten steel, which quickly weathers to a warm, brown color.

“We will be incredibly lucky to have pieces by both of these artists on our campus,” said Michael Bade, associate vice chancellor for capital programs and campus architect.

“Great art is a tremendous addition to the public landscape of our campuses,” he said. “It adds whimsy and profound meaning, and sparks peoples’ thoughts in important ways.”

UCSF has long been committed to public art. In 1999, then-Chancellor J. Michael Bishop pledged 1 percent of UCSF Mission Bay construction costs to establish initial funding for a public art program at the new campus. The program has since ended but provided a wealth of artworks now displayed throughout the buildings and open spaces.

Describing the program’s impetus, Bishop said: "Our purpose is to create an environment that will be a credit and benefit to the entire community, a stimulating and pleasant place to work and visit, and a permanent legacy to the city." The collection has since been named in his honor.