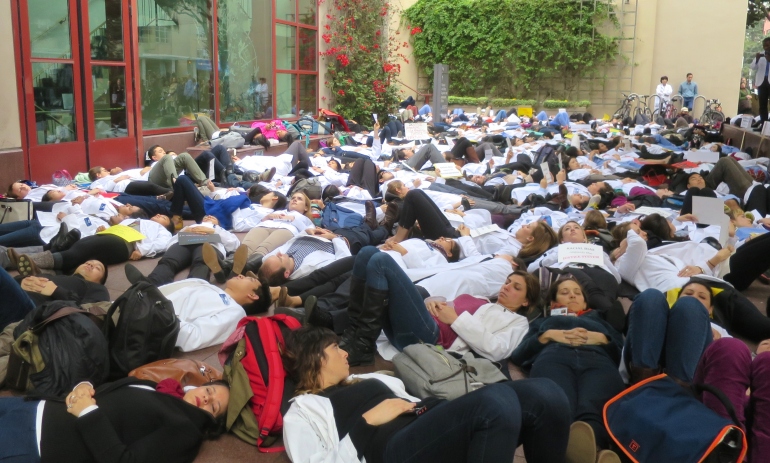 A group of UCSF School of Medicine students started a nationwide movement to bring attention to the impact of racial disparities in health care. They led more than 2,000 students in 80 medical schools across the country in a “white coat die-in” where they lay down in their white coats to protest recent grand jury decisions not to indict white police officers who killed Michael Brown and Eric Garner, unarmed African American men in Ferguson, Missouri, and New York City, respectively.

At UCSF, more than 150 students and some faculty and staff members gathered in front of the UCSF Parnassus Library at noon on Dec. 10. Making sure not to block the sidewalk or entrance to the library, they lay down for 45 minutes in silence. Many closed their eyes. Some held hands.

“As health professional students, we really want to emphasize the fact that what happens in the community bears relation to what happens in our work,” said event organizer Nicolás Barceló, a fourth-year student in UCSF School of Medicine. “The context in which our patients live contextualizes the type of care we need to provide.” 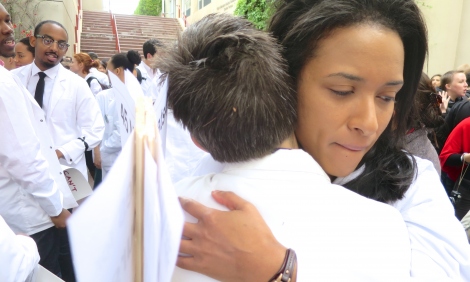 This movement started at UCSF only five days before the “die-in” when a core group of students of color in the UCSF Underrepresented In Medicine (UIM) program, and their white allies within the School of Medicine, worked with established networks of the Student National Medical Association (SNMA), the Latino Medical Students Association (LMSA), and the PRIME Program of UC medical schools to raise awareness. Soon after the hashtag #whitecoat4blacklives was born.

“Using social media as the primary driver, and with the help of incredible individuals, many of whom we had never met, our idea became a shared cause,” said Barceló. “Students at UPenn were responsible for creating the national Facebook group. The national press release disseminated through Physicians for a National Health Program (PNHP), which was a product of the collaboration between students from UCSF, UPenn, Brown, and Mt Sinai. The artwork of white coats becoming flying doves – perhaps most symbolic of the movement –was created by a student at UCSF.”

The School of Medicine-led event also included participation by students in the School of Dentistry, School of Nursing and School of Pharmacy. The hashtag #WhiteCoats4BlackLives generated close to 2,000 posts or mentions on Twitter, Facebook and Instagram on the day of the event, reaching more than one million people. It was covered by local and national media, including MSNBC, the Huffington Post and the San Francisco Chronicle. 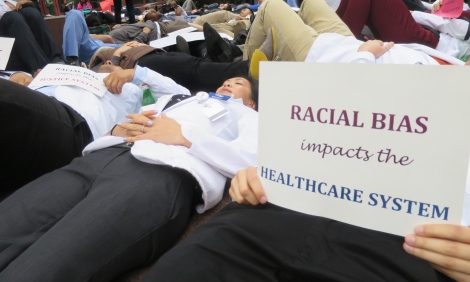 Students held signs like this one to express their reason for participating in Wednesday's "die-in" event. Photo by Leland Kim

“This movement is particularly important because in the end we’re here to advocate for our patients, to be the voice for those who are not heard,” said Daniela Brissett, a second-year School of Medicine student who helped organize the event. “Health care disparities for people of color are ever growing and we need to change that. It’s the responsibility of us, as well as our faculty and our deans. And it starts here, and it starts with the resources we need to provide for our patients.”

Some faculty members and members of the leadership team including Renee Navarro, PharmD, MD, Vice Chancellor of Diversity and Outreach, came out to support the students.

“It’s been an incredible catalyst to bring together students,” said Barceló . “We couldn’t be more grateful for the support we’ve received from our administration, from our Vice Chancellor Dr. Renee Navarro.” 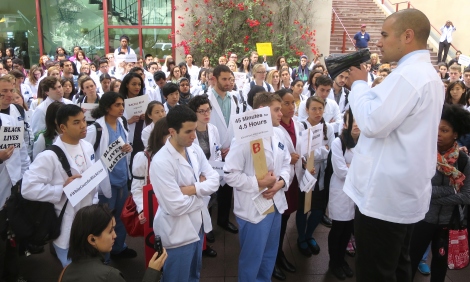 Nicolás Barceló, a fourth-year School of Medicine student and one of the organizers of Wednesday's event, encourages his fellow students to make a difference in impacting racial disparities in health care, following the "die-in" event. Photo by Leland Kim

As a follow up, the student organizers of the “die-in” scheduled a Town Hall meeting on Dec. 12 at Cole Hall to share reflections on violence and racial bias in the community as well as in the health care system. They also brainstormed ideas for organized student response with several Deans and some faculty members.

“We look forward to having productive conversations with leadership here at UCSF and other UC campuses to amend our curriculum, to increase diversity both in the students and in the faculty,” Barceló said. “Ultimately we want to improve relations between our institutions and the communities we serve.”

In the days following the “die-in,” several other college campuses in other parts of the country hosted town halls and open meetings to discuss and develop a plan for institutional change.

At the national level, student leaders of the movement are deciding how to proceed in effecting change. They hope to systematically reform the policies and practice of medicine to more adequately address racism and violence as major determinants to health.

Editor’s note: This story, originally published on Dec. 12, was revised on Dec. 16 to reflect the pivotal role UCSF students had in this movement. 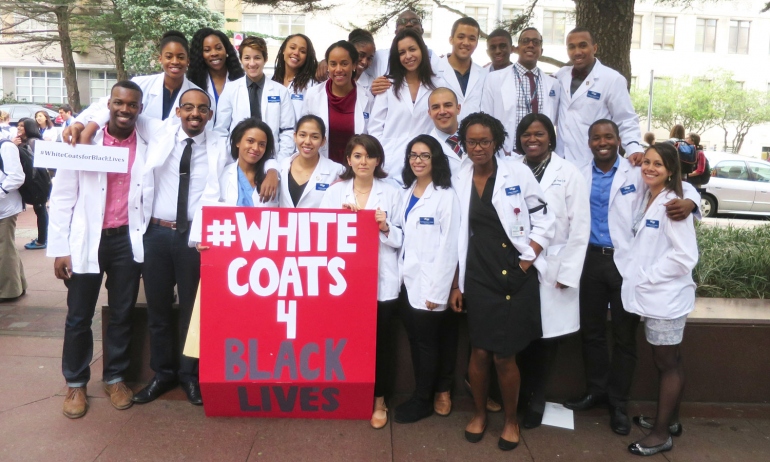