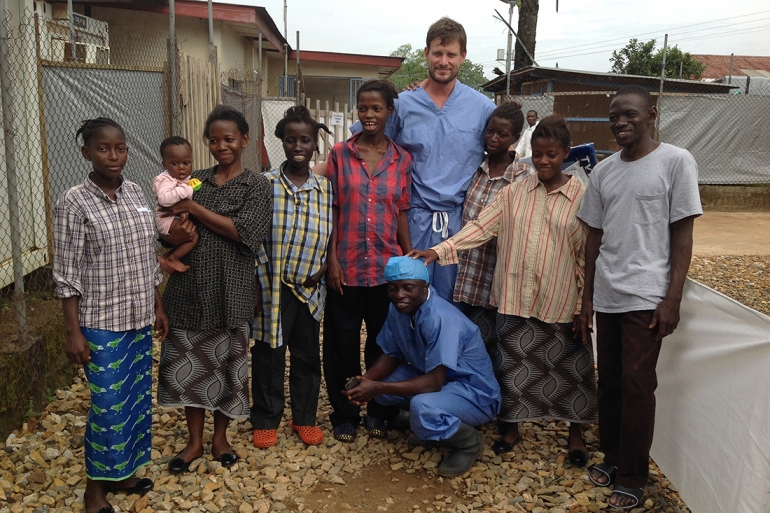 Ian Crozier, before he became sick with ebola, gathered with survivors and a nurse in Kenema, Sierra Leone. Photo by Jackson Amone/World Health Organization

He’s lost 30 pounds and a third of his hair. His short-term memory still hasn’t returned to what it was three months ago, when he became so ill with Ebola that his lungs, kidneys and liver began to fail. But Ian Crozier, MD, who may well be the sickest patient to survive the disease so far, was alive and well at UC San Francisco on Tuesday and determined to tell his story of survival, which he quietly noted, “6,000 others cannot.”

Crozier, 44, an infectious disease specialist, worked for only three weeks in Kenema, Sierra Leone, before he got infected, although he still does not know how. He spent 40 days at Emory University Hospital in Atlanta, on a ventilator for two weeks and on dialysis for three, before he could finally go home. He decided at the outset to keep his identity private, to protect his family. 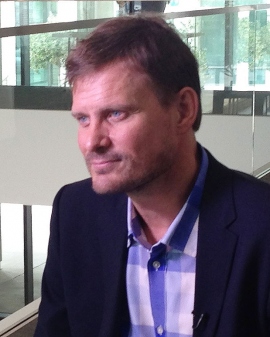 Ian Crozier, MD, who contracted Ebola while treating patients in Sierra Leone, spoke about his experience at UCSF on Dec. 9. Photo by Laura Kurtzman

Now, Crozier has begun to speak out about his ordeal, with effusive thanks to his caregivers at Emory.

Crozier, who was the featured speaker during a panel discussion on Ebola at UCSF, hopes the story of his illness and recovery will focus attention on the epidemic, which continues to spread, especially in Sierra Leone. Waving away talk of his own heroism, he points listeners instead to the everyday sacrifices of all of those who continue to fight the epidemic in West Africa, most of them in ways the world will never know.

Before heading to Sierra Leone to work with the World Health Organization (WHO), Crozier was mentoring Ugandan doctors in complex HIV management at the Infectious Diseases Institute (IDI) in Kampala, which was started with help from the Accordia Global Health Foundation, the group that sponsored Crozier’s visit.

Overcoming Fear to Fight the Disease

Alex Coutinho, who headed the IDI from 2007 to 2014, and helped treat previous Ebola outbreaks in Uganda, said it was natural for people in the United States to fear such a strange and terrifying disease, just as they feared HIV during the early years of the AIDS epidemic.

Yet Coutinho said the public is also learning from the disease. “People will understand better how to deal with Ebola next time,” he said, adding that there will be a next time, for this disease and for other, as yet, unknown threats.

Coutinho said how Ebola works is still largely a mystery. Why, for instance, do only half the family members of Ebola victims cared for at home become infected? Why does the risk of death increase as people age? And why do 95 percent of pregnant women infected with Ebola die?

Coutinho cautioned that everyone should remember that the Ebola epidemic kills many more people than just those who become infected, when chaos and fear bring down entire health systems, and people can no longer get care for treatable diseases, like malaria, HIV and tuberculosis. These deaths, he said, most likely surpass the numbers of Ebola casualties in the countries where it is endemic.

“It’s the mothers and the children who suffer,” Coutinho said.

More than 6,000 people have now died from Ebola in West Africa. Far fewer have survived infection. Crozier pulled through, despite his catastrophic symptoms, because of the “incredible, unparalleled care” he received at Emory and possibly also the antibodies he received from Will Pooley, the British nurse he had diagnosed and then evacuated from Sierra Leone to Great Britain just before he himself got sick.

“I went to his room in PPE,” Crozier recalled. “We didn’t need words, really.”

Many other health care workers, almost all of them African, have not made it. According to the WHO, nearly 350 of the more than 600 infected so far have died.

Others on the panel with Crozier searched for ways to understand the outbreak: Why did this one spin out of control when all previous outbreaks had been contained quickly? What can the scientific world do now to help? What would prevent it from happening again?

Warner Greene, MD, PhD, director of the Gladstone Institute of Virology & Immunology and executive chair at Accordia, said the answer was to support more institutes like the IDI, to build up the scientific capacity in African medical centers.

“The center of excellence model is the way forward in Africa,” he said.

Crozier said it would be the personal stories – of unimaginable loss and suffering, as well as courage – that ultimately would enable people to overcome their fear and find ways to help. He hopes the next chapter in his own story will be to return to West Africa.