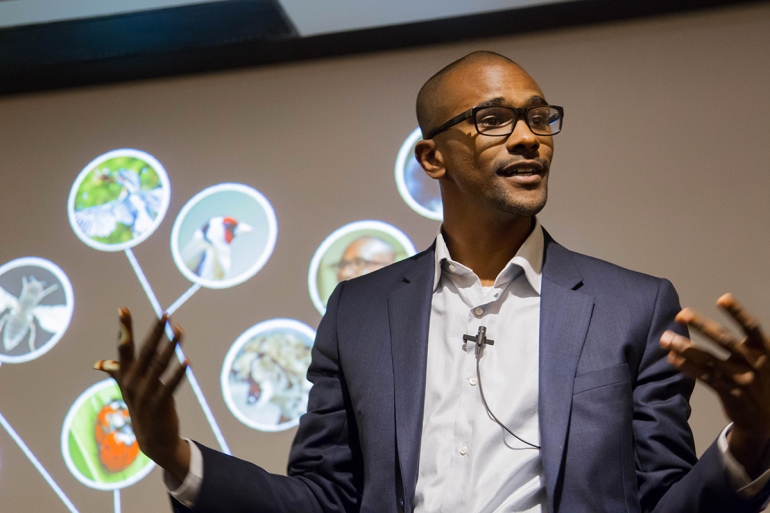 Sama Ahmed, winner of the grand prize in the Three Minute Thesis competition at UCSF, engages the crowd as he explains his thesis research.

It took these graduate students many hours to get to just three minutes.

Nine graduate students participated in the first Three Minute Thesis competition at UCSF where they winnowed their complex science PhD thesis into an engaging three-minute speech that was both clear and entertaining for a lay audience. 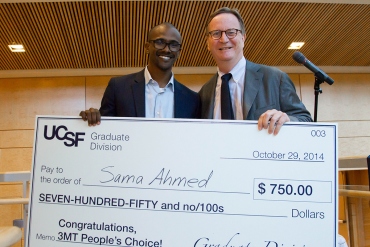 Sama Ahmed poses with Chancellor Sam Hawgood after winning both the grand prize and the people's choice award.

Neuroscience student Sama Ahmed charmed both the panel of judges and the audience, winning the grand prize and the people’s choice award for his animated talk on discovering a gene that helps fruit flies distinguish their own species from other insects.

Chuchu Zhang, also a neuroscience student, won the runner-up prize for her spirited and thoughtful explanation of her research on how neuron signals combine to create distinct pain sensations in the brain.

These nine finalists presented their three-minute theses from memory in front of a standing-room-only audience, including a panel of judges led by Chancellor Sam Hawgood, MBBS, in the Genentech Hall Auditorium on Oct. 29. The grand prize in the competition was $3,000; the runner-up received $1,500, and the People's Choice award was worth $750.

Finding Stories in the Science

“I was stunned by the quality and the self confidence and the ability to get across complex concepts in digestible pieces,” said Hawgood. “But the main thing was their enthusiasm and passion for science.”

Ahmed, the winner, said he intentionally designed his three-minute spiel like an hourglass: “I wanted to start really big and get people interested in the story, and then take them with me to the nitty-gritty, and then end by taking them out to the big picture.”

Watch videos of each of the nine finalists delivering their presentation on Oct. 29. 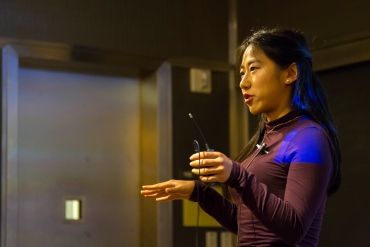 Runner-up Chuchu Zhang spoke with grace and humor about the complexities of how neurons create distinct pain sensations in the brain. 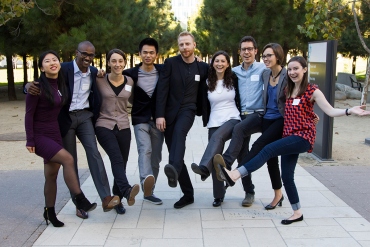 All nine finalists shared a moment together before heading into the competition.

Ahmed said he practiced his talk in front of several different groups of people, and after their feedback, he cut out some science jargon and really honed the talk to what the public would be interested in.

“A lot of times what excites us scientists is different from what excites the public,” said Zhang. To create a talk that would intrigue the general public, she said she asked herself the big question: “Why am I doing this research?”

That’s exactly what Elizabeth Watkins, PhD, dean of the Graduate Division, hoped students would do for this contest.

In these three-minute speeches, she said, “they have to explain what I always ask of my grad students—‘so what?’ Why should anyone care about their research?”

Why Care About Science?

Watkins said it’s an essential career skill for scientists to be able to communicate well with those outside their discipline.  Not only that, she said, but it’s critical for scientists and scholars to make the case for their work.

“Our work depends on funding from the government, industry partners, philanthropists – we must be able to explain why our work matters. And if we can do it in under three minutes, all the better.”

“Our nine finalists are better at presenting their research now than when they started his challenge,” Watkins said.

Three Minute Thesis (3MT®) is a research communication competition first developed by the University of Queensland in Australia, alma mater of Chancellor Sam Hawgood. The competition is now held at about 170 universities in 17 countries and counting. The 3MT at UCSF was held in conjunction with the Bay Area Science Festival.