A newly discovered population of immune cells in tumors is associated with less severe cancer outcomes in humans, and may have therapeutic potential, according to a new UC San Francisco study of 3,600 human tumors of 12 types, as well as mouse experiments.

The research is published online October 16, 2014 in the journal Cancer Cell. 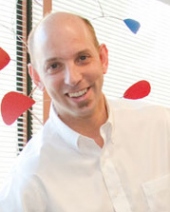 Molecules associated with these cells, newly identified by the UCSF researchers, could be the focus of new immunotherapies that are more precisely targeted than current immunotherapies now in clinical trials, said Matthew Krummel, PhD, professor of pathology at UCSF and the leader of the study.

In fact, the UCSF researchers concluded that the presence of these cells may be the reason current immunotherapies aimed at boosting T lymphocyte responses have any effectiveness whatsoever.

Krummel’s lab team depleted the population of these already rare cells in mice and demonstrated that the immune system was then unable to control tumors, even when the mice were given immunotherapeutic treatments.

“We found a rare cell type, present in most tumors — but very sparsely — that confers immunity and thus assists in immune rejection of the tumor,” Krummel said.

Tumors are able to grow large and spread in part because they subvert the immune system. Cancers prevent the activation of T lymphocytes within the immune system that specifically target tumor molecules recognized as abnormal.

Immune cells known as antigen-presenting cells need to activate T lymphocytes to trigger them to attack, but in cancer, cells called tumor-associated macrophages tell T lymphocytes to remain dormant, and also foster the development of blood vessels that feed the growing tumor.

However, the distinct, rare population of cells newly identified by Krummel’s lab team persists in trying to activate tumor-targeting T lymphocytes, apparently with enough success despite their scarcity to make a difference in cancer outcomes. Krummel calls the cells antigen-presenting CD103+ dendritic cells, and they make up fewer than 1 percent of all antigen-presenting cells, he said.

The researchers found specific molecules on the cells that serve as a signature for their identification, and molecules that might be targeted to boost the cells’ power to activate T lymphocytes.

“Patients who have the signature of these cells live consistently longer than those with weak signatures,” Krummel said.

“These antigen-presenting CD103+ dendritic cells are an important but previously unrecognized ally in immunity to cancer, and we believe that we can learn to manipulate their numbers for new cancer immunotherapies.

“We have identified proteins that we plan to target in order to enhance the good cells, and conversely, we think we can treat molecules on the surface of the bad cells as targets to eliminate those cells.”

The association of the signature for antigen-presenting CD103+ dendritic cells with better outcomes was especially strong in head and neck cancers and in breast cancers, Krummel said.

The strength of the association between the CD103+ cell signature and cancer outcomes raises the prospect that researchers might even be able to detect cancer early via an immune response. “We want to find genes that are only present in immune cells in cancer, and not in people without cancer,” Krummel said.

The major funding source for the work reported by Krummel’s lab group in Cancer Cell is the National Institutes of Health.