UC San Francisco ranked at the top in a national evaluation of residency training programs by the online physician network Doximity and U.S. News & World Report.

A total of 15 UCSF programs ranked in the top 10, including three that topped the list. 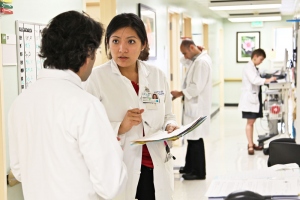 A resident consults with George Sawaya, MD, a professor of Obstetrics, Gynecology, and Reproductive Sciences, in the women's health clinic at San Francisco General Hospital and Trauma Center. Photo by Susan Merrell

Doximity ranked 3,691 residency programs across the country, based on a survey of its physician network (view methodology).

UCSF’s residency training programs ranked No. 1 in anesthesiology, neurological surgery and radiology; No, 2 in dermatology, obstetrics & gynecology and neurology; No. 3 in internal medicine; No. 4 in radiation oncology; and No. 5 in surgery and urology.

“Our residency programs are, in fact, very strong,” he said.

“Measuring success by almost any outcome, including accreditation data, resident match results, resident and faculty surveys, opportunities to care for a terrific population of patients, faculty quality, careers of our graduates, or by reputation of student deans and program directors would place our programs in the very top tier.”