To diagnose painful kidney stones in hospital emergency rooms, CT scans are no better than less-often-used ultrasound exams, according to a clinical study conducted at 15 medical centers.

Unlike ultrasound, CT exposes patients to significant amounts of radiation. Although CT scans are favored by emergency-room physicians for kidney stone diagnosis, ultrasound should be used as the first step, according to senior study author Rebecca Smith-Bindman, MD, a professor in the Departments of Radiology; Epidemiology and Biostatistics; and Obstetrics, Gynecology and Reproductive Medicine at UC San Francisco. 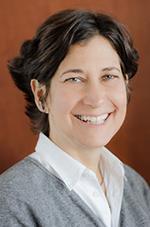 The study's findings were published in the Sept. 18 issue of the New England Journal of Medicine.

“Ultrasound is the right place to start,” Smith-Bindman said. “Radiation exposure is avoided, without any increase in any category of adverse events, and with no increase in cost.”

Patients in the study who were first examined with ultrasound sometimes received a follow-up CT exam at the physician’s discretion.

“Our results do not suggest that patients should undergo only ultrasound imaging, but rather that ultrasonography should be used as the initial diagnostic imaging test, with further imaging studies performed at the discretion of the physician on the basis of clinical judgment,” the study authors said.

Kidney stone rates are increasing, and in a 2010 National Health and Nutrition Examination Survey, one in 11 people reported having had at least one kidney stone. The use of CT to diagnose kidney stones has risen 10-fold in the last 15 years. CT exams generally are conducted by radiologists, while ultrasound exams may be conducted by emergency room physicians as well as radiologists. 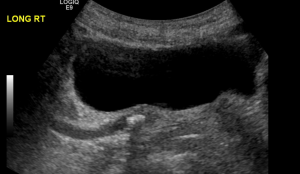 An ultrasound image of the bladder showing a ureter blocked by a kidney stone.

Emergency room patients whose pain was suspected to be due to kidney stones were randomly assigned in the NEJM study to one of three imaging groups. In one group patients received an ultrasound exam performed by an emergency room physician on site. A second group received similar ultrasonography performed by a radiologist, a specialist in the procedure. The third group received an abdominal CT scan, also conducted by a radiologist.

With six months of patient follow-up, the study found that health outcomes for 2,759 patients were just as good with ultrasound as with CT, and that patients fared no worse when emergency physicians instead of radiologists performed the ultrasound exam. Serious adverse events, pain, return trips to the emergency department or hospitalizations did not differ significantly among groups.

"New technology is developed all the time, and it’s hard to know when the new, sophisticated and expensive technology is better – in this case the simpler, cheaper, no-radiation technology is just as good,” Smith-Bindman said.

The study was completed over three years with a $9 million grant from the U.S. Department of Health and Human Services Agency for Healthcare Research and Quality, made available through the American Recovery & Reinvestment Act.