Everything is going high-tech – even in the dentist’s chair.

Dental X-rays expose patients to radiation, require time to process, and can only “see” a limited amount inside the mouth.

Now new optical techniques developed by UC San Francisco’s Daniel Fried, PhD, use light to take instantaneous digital images that can provide a better picture of our teeth and could one day zap cavities with pinpoint precision. 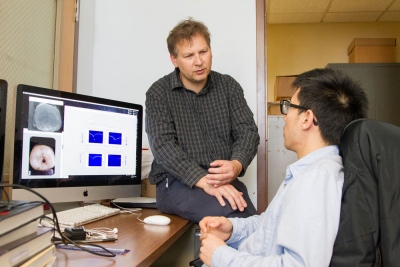 Fried, a professor in the School of Dentistry’s Division of Biomaterials and Bioengineering in the Department of Preventive and Restorative Dental Sciences, is a leading expert in a relatively new field of light-based dentistry, called biophotonics. It uses optical techniques such as near-infrared lasers and spectroscopy for imaging and therapy.

“The field is strongly moving in the direction of what we call minimally invasive dentistry,” said John Featherstone, dean of the School of Dentistry, “and the technologies being developed by Dan’s team are a key part of that philosophy.”

One of those technologies, called optical coherence tomography (OCT), uses near-infrared light – a wavelength of light invisible to humans – to create high-resolution, 3-D images of teeth.

OCT was popular in ophthalmology for displaying retinal structures, but research by Fried and his colleagues, Cynthia Darling, PhD, and Michal Staninec, DDS, PhD, demonstrated it could successfully be applied to dentistry for detecting damaged areas, or lesions, in teeth. The researchers showed that the technique was as good or better than X-rays for the early diagnosis of tooth decay. 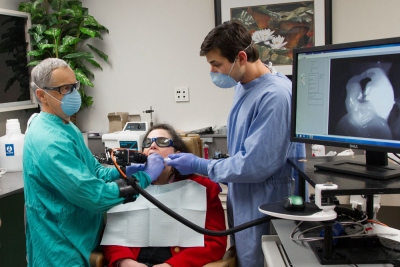 "Tooth enamel is almost completely transparent in the near-infrared," Fried said. "We showed that you could take an OCT image of a lesion and tell how severe it is.” Previously the only option was to extract the tooth and cut it open for closer inspection.

Fried and his collaborators also have shown that OCT is useful for monitoring cavities while they are healing.

"Dental decay isn't like cancer. You can actually treat it, arrest it and even reverse it,” Fried said. “If you spot the lesions early enough, you can treat them with fluoride and re-mineralize them, and you can measure this with OCT. It gives the clinician a way of telling whether the chemical intervention is working.”

While widespread in other medical fields, OCT is just beginning to make its way into dental offices.

A Return to Dentistry’s Roots

More recently, Fried's research has focused on identifying the wavelengths of near-infrared light that are ideal for screening "hidden" cavities in the pits and fissures of posterior teeth, which are difficult to detect in their early stages using conventional radiography techniques.

Research is a cornerstone of the UCSF School of Dentistry, the nation's largest recipient of National Institutes of Health funding among dental schools for 22 straight years. Here are a few other things the school is working on:

"Early detection is very important because there is a greater probability that you can use nonsurgical means such as fluoride therapy to arrest or even reverse the decay," Fried said.

In a way, Featherstone noted, the near-infrared imaging technique Fried’s team has developed is a return to the early days of dentistry, when practitioners relied mainly on their eyesight to detect tooth decay.

“The eye is one of the most incredible optical detectors that exists,” Featherstone said. “Here, instead of using visible light, we’re now choosing wavelengths of light that the tooth is transparent to in order to enhance what the eye can see.”

Featherstone commended Fried for his persistence in developing the near-infrared imaging technology.

“Dan and I talked about using a near-infrared camera to replace the eye years ago. It sounds simple in theory, but it took years to put together,” he said.

While dental X-rays won’t be completely eliminated anytime soon – they are still the best available method for tasks such as identifying abscesses, or pus-filled regions in bone associated with tooth decay – Fried believes the techniques he's helping develop could go a long way toward replacing radiographs for routine screening.

"There are also high-risk populations such as pregnant women and children where you don't want to have any radiation exposure," Fried said, "and we think [these techniques] could be particularly valuable for that."

"Sometimes it's very difficult to distinguish between dental composites and actual tooth structures, so we're working on laser systems that scan the tooth and only removes the composites," Fried said.

The technique involves using a laser to vaporize a tiny amount of material from a tooth and then analyze the resulting plume with a miniature spectrometer to identify the chemical makeup of a particular region.

"Teeth have a lot of calcium but composites don't," Fried said. "If we see calcium emission lines, we know not to hit that spot again with the laser." Fried's group is still refining the laser technique but have plans to conduct clinical studies soon.