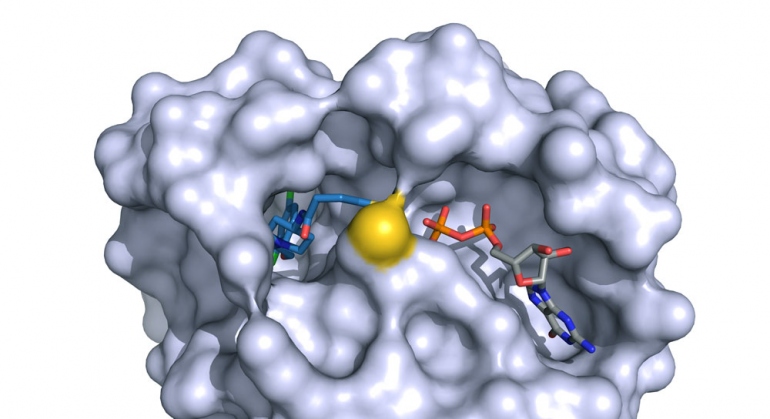 It’s one of the most common and deadly drivers of cancer, yet it has eluded any drug therapies for decades.

Now, buoyed by recent research breakthroughs and funding support, scientists are pushing harder than ever to target what has been called “undruggable.”

In the epic fight against cancer, a protein called Ras has been one of the arch-villains.

First identified in human cancers in the 1980s, this protein is responsible for roughly one-third of all cases, as well as some of the deadliest, including lung, colon and pancreatic cancers.

Ras is a key switch in a multi-step cascade of molecular interactions that take place within cells. Mutations in Ras proteins can result in excessive signals for cells to proliferate and cause them to ignore cues for programmed cell death, leading to unchecked growth and tumor formation.

The key to curing many cancers could be to disrupt this cell signaling and dependence on Ras.

Harold Varmus, MD, head of the National Cancer Institute who won the 1989 Nobel Prize for his cancer research at UCSF, and Frank McCormick, PhD, FRS, discuss why the RAS Program was formed.

Decades of research have proven unsuccessful in developing a drug that can target the mutant Ras proteins found in cancer, yet the potential remains huge – so huge that the National Cancer Institute (NCI) last year announced a $10 million effort, dubbed the RAS Program, aimed at developing new ideas for targeting the protein. Frank McCormick, PhD, FRS, a leader in Ras research, recently stepped down as director of the UCSF Helen Diller Comprehensive Cancer Center to lead the new NCI project.

“A lot of people got into the drug discovery for Ras very early on and failed,” McCormick explained. “The clinical need [for a Ras drug] is the same or perhaps even better recognized than it was 30 years ago, but technology has advanced to the point where it's worth having another shot at it.”

McCormick and other experts around the world will share their knowledge this week at a two-day symposium hosted by UC San Francisco called “Targeting RAS Now for Future Cancer Therapy.”

The Purest Example of Ras-Mutated Cancer

When Todd and Lisa Harris were informed that their 10-month-old son Evan had cancer, they were very upset, but they also felt as if a weight had been lifted. “At least now we had an answer, albeit an extremely painful one, and a path forward,” Lisa Harris said about her son’s diagnosis at the time.

In 2006, the child had been vomiting frequently for months, had developed unusual skin rashes, and blood tests had shown that his white blood cell count was alarmingly high, indicating a severely weakened immune system. Pediatricians had been unable to tell the Harrises why their baby was sick. 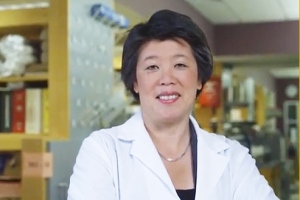 After taking their son to UCSF’s Pediatric Oncology Clinic, the Harrises finally received a diagnosis: Evan had Juvenile Myelomonocytic Leukemia, or JMML, a rare but very aggressive cancer of the blood that typically afflicts young children.

For a long time, the cause of JMML was a mystery, but recently genetic tests revealed that gene mutations that affect Ras and associated proteins appear to play a crucial role.

JMML tends to afflict very young children (the average age of patients is under 2 years old) and tests of umbilical cord blood obtained immediately after birth reveal the cancer can begin to manifest even while the child is still in the womb, and a number of inherited gene mutations that affect Ras signaling are known to increase the risk of developing JMML. For these reasons, doctors often say JMML is the purest known example of a human cancer that is caused by Ras.

“For a child to get leukemia that young, the mutation has to be so strong that it’s really driving the cancer,” Loh said.

Pharmaceutical, biotech and academic laboratories long have tried to develop drugs to target Ras. Most of the efforts focused on K-Ras, which is one of the three different types, or “isoforms,” of Ras – the others are N-Ras and H-Ras – and is the most commonly mutated in cancers. 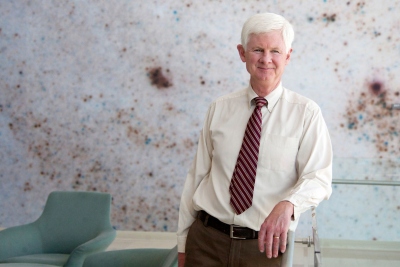 Many of the challenges researchers face in developing Ras drugs have to do with how the protein works.

Ras proteins are small enzymes that normally bind to the biomolecule GTP. When bound to GTP, Ras is considered to be in an “on” state because it stimulates a cascade of other protein interactions within cells that ultimately drive their growth.

The problem is that mutant Ras proteins grip on very tightly to GTP, which prevents them from converting GTP to another biomolecule, GDP. As a result, they are constantly in an “on” state.

“There have been a lot of different ways that people have tried to tackle this problem,” Shannon said. “One has been trying to develop drugs that restore normal Ras protein functions such as hydrolyzing GTP to GDP. That has proven to be extremely difficult.”

Some scientists have taken a different tack and tried to develop molecules that compete with GTP for the attention of mutant Ras proteins, but such approaches have also failed.

A Multipronged Attack on Ras

Researchers are approaching the problem of Ras from a number of different angles – directly attacking the protein, disrupting its signaling and focusing on targets that are triggered by Ras.

Loh and Shannon, for example, are investigating the use of a class of drugs called MEK inhibitors for treatment of JMML. 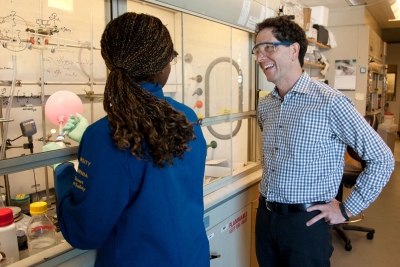 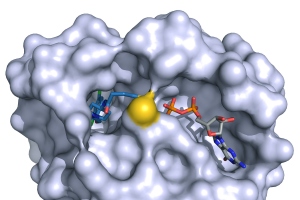 In a recent breakthrough, Kevan Shokat's team discovered a binding site, or “pocket," on K-Ras where they could design a chemical compound (shown in color) to attach and inhibit its activity. Image courtesy of Shokat Lab

“MEK is a protein directly downstream of Ras that gets activated when Ras is activated”, Loh said. “We think if we can inhibit MEK, we might be able to put the brakes on Ras and slow down the leukemia.”

Meanwhile, a team led by Kevan Shokat, PhD, chair of the UCSF Department of Cellular and Molecular Pharmacology and a Howard Hughes Medical Institute investigator, is attacking Ras directly.

Shokat’s team made a significant breakthrough in a study published in Nature last fall, developing a method for exploiting a previously unknown “Achilles heel” in K-Ras. The weak point is a newly discovered binding site, or “pocket,” identified by Shokat’s team.

The group designed a chemical compound that fits inside this pocket and inhibits the normal activity of a version of mutant K-Ras implicated in about 7 percent of all lung cancer, while leaving normal versions of the protein untouched. When tested on human lung cancer cells grown in culture, the team’s molecule efficiently killed the Ras-driven cancer cells.

Shokat thinks his team’s chemical compound can be developed into a drug that will be ready for clinical trials in as little as two years.

The group is currently tinkering with their molecule to make it bind to mutant K-Ras more quickly and consistently. “That way, we won’t need to deliver as much of our drug to the human body,” Shokat said.

The Future of Ras-Targeted Therapy

The breakthrough by Shokat’s team is a big step toward developing Ras-targeted cancer therapies, but it’s just the beginning.

The molecule that his team developed is very specific, targeting only one particular mutation on a particular version of mutant K-Ras. That makes it ineffective against cancers that involve K-Ras proteins that have been corrupted by different mutations, or against cancers that involve other Ras isoforms such as the NRAS mutation that is one of the major contributors to JMML.

Shokat, however, is optimistic: “We’re working to extend what we’ve found to other Ras mutations that cause cancer,” he said. 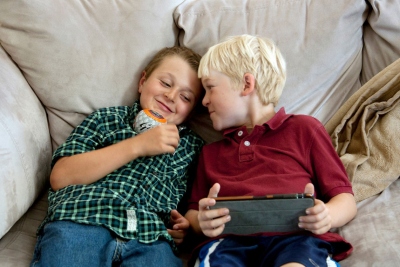 Evan Harris (left), 9, plays video games with his younger brother Dane, 6, at their Fremont, Calif., home. In 2006, Evan was diagnosed with Juvenile Myelomonocytic Leukemia (JMML), a rare form of cancer driven by a mutation in Ras proteins, but underwent a successful bone marrow transplant to cure it. Photo by Cindy Chew

If his team succeeds, it’s possible that future JMML patients could be spared the bone marrow transplant that Evan Harris endured – and that’s only successful 50 percent of the time. Fortunately, Evan’s transplant was a success.

“Evan is completely healthy now,” said Lisa Harris, who with her husband is now actively involved with the JMML Foundation to support other families. “He’s a baseball fanatic who plays second base in Little League, he’s doing well academically, and he’s a great older brother. He’s a normal 9-year-old.”

For now, the finding offers encouragement that technological advances are bringing scientists closer to the answer.

“Shokat's approach has motivated others to think about new approaches to Ras,” McCormick said. “His team found a previously unidentified pocket that their molecule could bind to, so it just teaches us that there are potential ways of attacking the protein that weren't previously recognized.”