Infants exposed to a diverse range of bacterial species in house dust during the first year of life appear to be less likely to develop asthma in early childhood, according to a new study published online on June 6, 2014, in the Journal of Allergy and Clinical Immunology.

In fact, some of the protective bacteria are abundant in cockroaches and mice, the source of these common allergens, according to UC San Francisco researcher Susan Lynch, PhD, a lead author for the multi-institutional study.

Lynch also found that exposure during the first year of life to household dust containing higher levels of two specific groups of bacteria that are abundant in the human gut – Bacteriodes and Firmicutes – was associated with less asthma risk in the analysis of data from 104 inner-city babies in four cities.

Lynch, an associate professor of medicine with the Division of Gastroenterology at UCSF, said there is no obvious mechanism explaining the association, but the evidence supports earlier research that strongly pointed to the influence of microbial species in shaping immune responses.

The new microbial research, led by Lynch and UCSF pulmonologist Homer Boushey, MD, a professor of medicine and an asthma expert at UCSF, was part of the larger Urban Environment and Childhood Asthma (URECA) study, led by James Gern, MD, a professor of pediatrics and medicine at the University of Wisconsin School of Medicine and Public Health in Madison, and by Robert Wood, MD, chief of allergy and immunology at Johns Hopkins Children's Center and also a lead author of the new study. URECA researchers aim to discover reasons why asthma is more common and severe among children in poor inner cities.

To come up with their latest findings, the scientists compared exposure to allergens from cat, cockroach, dog, dust mite and mouse on one hand, and wheezing episodes as reported by parents and allergy as assessed by skin-prick tests on the other. 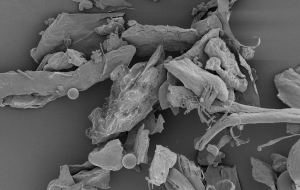 Through the first three years of life, cumulative exposure to allergy-provoking substances from cats, mice, cockroaches and dust mites – but not from dogs – was associated with more wheezing and allergic reaction in the new study. This was an expected result, based on earlier research. But this association was reversed when the researchers analyzed exposures for just the first year of life, when greater exposure to certain allergens, those from cockroaches and mice, was associated with less risk of wheezing and allergy at three years.

These results indicate that immune responses might be shaped by exposures during the first year of life differently than they are by later exposures. “These findings suggest that concomitant exposure to high levels of certain allergens and bacteria in early life may be beneficial,” the researchers wrote in the journal paper.

If the study results are borne out in follow-up research in other populations, it might warrant testing of new strategies, Lynch said, including, “microbial supplementation to inoculate children in early life with appropriate microbes to help protect them against wheezing and allergy.”

Lynch’s own work and research by several others in the field has led her to become convinced that “the composition and function of the gut microbiome strongly influence immune reactions and present a novel avenue for development of therapeutics for both allergic asthma and a range of other diseases.”

According to Boushey, “Strict avoidance of allergens to lower asthma risk has been unsuccessful. Maybe permitting allergen exposures, with increased exposure to the sources of certain microbes, might be more successful in reducing asthma risk.”

Boushey noted that the research team’s new research associating increased bacterial diversity and abundance with lower risk appears to support the "hygiene hypothesis," which suggests that the increase in the prevalence of allergies and asthma in modern, westernized countries might be an unintended consequence of children being exposed to fewer bacteria in cleaner indoor environments.

“If confirmed by other studies, these findings might even have us think of returning to the patterns of exposure of the 1940’s, when families were larger, food was less processed and sterilized, and children spent a lot of their time outdoors,” he said.

In an editorial accompanying the study, Dennis R. Ownby, MD, professor of pediatrics at Georgia Regents University stated, “If it is true that cockroaches and mice are important sources of both major allergens and potentially allergy-suppressive bacteria, we have an interesting yin and yang which may explain some of the inconsistencies and apparent contradictions of previous reports regarding allergen exposures and urban asthma.”

Lynch is leading a lab team that is examining microbes in stool from a different population, also being studied from birth, and she expects that the study will shed more light on gut microbes that might inhibit development of asthma and allergy.

The study was funded by the National Institutes of Heath.