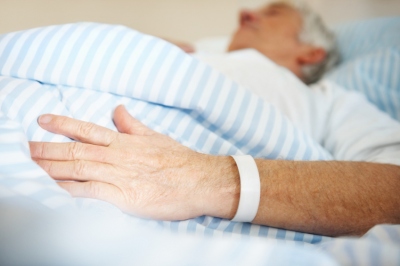 Research led by a UC San Francisco investigator establishes a new benchmark in the treatment of patients with metastatic colorectal cancer and sets a new expectation for how long patients can live with the particularly lethal disease.

The research, which spanned a decade, was unveiled at a plenary presentation on June 1 at the 2014 Annual Meeting of the American Society of Clinical Oncology (ASCO) in Chicago. The plenary session spotlights research deemed to have the highest scientific merit and greatest impact on cancer research and care. The colorectal cancer study was selected from among more than 5,000 abstracts to be shared at the meeting.

Median survival rate during the trial was approximately 29 months under either approach – seven months longer than the expectations 10 years ago and nearly triple the survival span of 20 years ago. About 10 percent of the patients lived more than five years, an extremely encouraging amount of time compared to two decades ago.

The results answer long-standing questions about the relative effectiveness of four common treatments, and provide patients and physicians important new information as they grapple with treatment choices. Moreover, the study, which began in 2004, reflects the evolution of the highly-lethal cancer, the second leading cause of cancer deaths in the United States and the third most common malignant neoplasm in the world, according to the National Cancer Institute (NCI).

“Our investigation has clarified the standard of care and given us a deeper understanding of metastatic colorectal cancer,” said Venook, principal investigator and lead author of the study. He is a professor of clinical medicine and chief of gastrointestinal oncology at UCSF.

“Today, patients with this form of cancer have real choices, more ways to personalize their treatment,” he said. “Treatment should reflect their preferences and concerns for potential side effects without compromising its effectiveness.”

Most patients with metastatic disease remain incurable, but the five-year survival rate for American patients with non-metastatic cancer improved from 50 percent in 1975 to 66 percent three decades later, reported a recent article in ASCO’s Journal of Clinical Oncology.

The study presented at ASCO sought to determine whether there is an optimal first-line treatment for patients with untreated metastatic colorectal cancer without KRAS mutations (an abnormal gene that can affect response to therapy) by comparing chemotherapy plus two widely used targeted drugs – bevacizumab or cetuximab. Patients were assigned by their physicians to Folfiri or Folfox chemotherapy regimens and then randomized to either chemotherapy and cetuximab or chemotherapy and bevacizumab. Costs of the two drugs are comparable although cetuximab involves more frequent infusions and is therefore more costly.

In all, 1,137 patients took part. The median age of participants was 59. Approximately 14 percent of the patients had prior radiation and about 9 percent underwent prior adjuvant chemotherapy.

At the outset, researchers anticipated that patients would be expected to live 22 months, but the hope was that they could live longer if the drugs were used in the right way. And in fact, the overall survival reached about 29 months – statistically similar in both arms of the trial. Moreover, some 124 patients were temporarily rendered disease-free and their median survival extended to five-and-a-half years.

Patients were usually able to maintain a good quality of life until the final months, when they experienced a gradual tapering down, Venook said. Side effects differed between the two agents, but included severe acne, diarrhea, high blood pressure, headaches, mouth sores and fatigue.

Researchers concluded that overall survival on both therapies is the same and that either treatment can be considered an option for first line therapy of patients with metastatic colorectal cancer.

“It shows the ground we’ve covered,” he said. “The study was amended 14 times over the course of 10 years – we changed it as the field changed. We now know that treatment for advanced colorectal cancer should be viewed as a continuum. In this study, patients and their physicians were willing to be more aggressive at working toward a cure rather than just treating symptoms. This was new territory for this disease and we think it made a difference. Still, even though we’ve made progress, there is much work yet to be done.”

The study was conducted by two of the NCI’s National Clinical Trial Network groups – Cancer and Leukemia Group B (now Alliance for Clinical Trials in Oncology) and SWOG Cancer Research, a cancer research cooperative group that designs and conducts multidisciplinary clinical trials. The Alliance, which led the study, is based in Boston, and SWOG is headquartered at the Knight Cancer Institute at Oregon Health & Science University in Portland.

The research was supported in part by the National Cancer Institute, Imclone, Roche, Genentech, BMS, and Eli Lily.

The authors expressed gratitude to the National Cancer Institute for ongoing support as they call upon the insights gleaned from the trial to help guide them in future clinical trials for colorectal cancer.

“We also thank our patients,” said Venook. “We are humbled by their courage and by the confidence and trust they place in us by participating in clinical trials.”