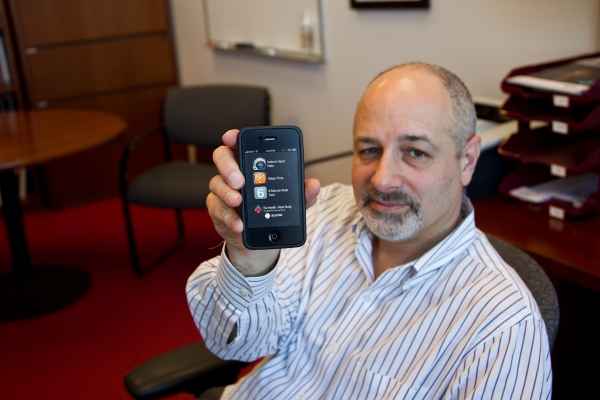 Jeffrey Olgin, MD, chief of the division of Cardiology, displays an application he developed as part of the Health eHeart Study to reduce heart disease that monitors vital signs during daily activities.

UC San Francisco scientists and clinicians are working on many projects to convert data to knowledge, insight and action, one of the areas of innovation identified in the strategic planning effort known as UCSF 2.0.

Cardiologist and electrophysiologist Jeffrey Olgin, MD, along with UCSF colleagues Mark Pletcher and Gregory Marcus, are leading the UCSF-developed Health eHeart study. Funded by the Salesforce.com Foundation and endorsed by the American Heart Association, the study aims to enroll 1 million people from around the world to use their smartphones to send their health data to study doctors so they can better understand how the heart functions and develop new ways to predict and prevent cardiovascular disease.

Olgin says he’s learned a few lessons during the course of this project. “If you think outside the usual box of the University and assemble a diverse team within the University, engineers and others to take advantage of the greater environment that we’re in, you can move projects quickly and in a different direction than you might have originally thought. That’s been a really fun process.

“The second thing is, at least in the digital health world, we are in such an incredible physical location to really lead this from an academic side. People really want to work with UCSF on digital health and what is astonishing to me is that people in the start-ups and companies doing this, while they’re for profit and the investors want to make money, that really is a small part of it. They have a real sense that they want to change health care and they want to change the world,” Olgin said.

Michael Blum, MD, associate vice chancellor for informatics, says UCSF is making the case that these partnerships are mutually beneficial to both the bottom line and better health. He points to the recent UCSF partnership with Samsung Electronics Co., Ltd., to establish the UCSF-Samsung Digital Health Innovation Lab, a first-of-its-kind test bed where entrepreneurs and innovators can accelerate the validation and commercialization of promising new sensors, algorithms, and digital health technologies for preventive health solutions.

“There are many new sensors and devices coming onto the market for consumers, but without medical validation, most of these will have limited impacts on health,” Blum said. “Meanwhile, many practitioners also have creative ideas for new devices, but they lack the technological knowledge to fully develop them. This partnership will bring together these two very different worlds of expertise with the resources needed to accelerate new and disruptive technologies that will truly change lives.” 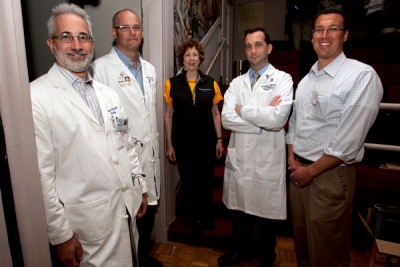 UCSF is also funding about a dozen projects internally through the CTSI Catalyst Awards program, which brings together industry experts, entrepreneurs and venture capitalists to evaluate new inventions. Among the interesting products in the pipeline, Blum says, are devices that can identify early markers for cognitive decline and an app that can detect reading delay in children early on before they go to school and fall behind.

Over the past few years, UCSF has significantly invested in electronic medical records, informatics, digital health and data sharing and is expanding critical services to support research, such as the Research Development Office, and UCSF Innovation, Technology & Alliances, which paves new paths for researchers to take discoveries from their labs or clinics to the commercial marketplace.

But these types of novel projects are happening so fast that it may be time, Blum says, to host an innovation day at UCSF, similar to this year's informatics day to inform the campus community about how UCSF can support novel ideas and projects. The first UCSF Informatics Day on Tuesday, June 10 will give faculty the opportunity to learn about the systems and tools to support basic, translational and clinical research. Read more about Informatics Day 2014.

While it would be great for UCSF to set the standard for open health data and to create at UC-wide health partnership, ideas that emerged in UCSF 2.0, Robert Nussbaum, MD, who holds the Holly Smith Distinguished Professorship in Science and Medicine at UCSF, believes the regulatory system aimed at protecting the privacy of research subjects must be streamlined and simplified and the barriers that exist across UCSF and the UC system should be lowered.

We need to figure out how we, in a safe and protective way for our patients, improve our knowledge and share information to better understand and treat disease.

“We need to work very hard on developing partnerships with the public, with society, to take a very close look at the current state of research, patient consent and clinical learning systems,” said Nussbaum. “We need to figure out how we, in a safe and protective way for our patients, improve our knowledge and share information to better understand and treat disease.”

The line must be clearly defined between clinical research and patient care and the process of sharing data should be easier and more cost-efficient, he said.

“I think we have an opportunity with UC Hastings, Boalt Hall and other groups from the University of California to take a serious look at the regulatory and legal frameworks needed to convert our entire health system into a clinical learning system,” Nussbaum said.

Championing a Culture of Open Science

UCSF is moving in the direction to create a culture of open science and learning by reducing barriers to data sharing to further the development of new hypotheses, said University Librarian Karen Butter.

The impetus for open science and sharing data is coming from government funders, including the National Institutes of Health, which now require principal investigators to declare in their grant proposals how they will share data after their research is published, she said. This is also being driven by an overall shift in publishing paradigms, where there is new emphasis on immediacy of publication, reproducibility and changes in peer-review.

Megan Laurance, who specializes in genomic data analysis and knowledge management, joined the UCSF Library two years ago to help faculty define the flow of data so they can organize it and describe it in all phases of the research data lifecycle, from collection to analysis and reporting, with the end goal of ensuring that data can be optimally used, re-used and understood by other researchers.

Laureance is working with faculty on a few pilot programs to use open data repositories, including the recently launched web-based data sharing system called DataShare.

A collaborative effort of the UCSF Library, Clinical and Translational Science Institute, and the California Digital Library, DataShare provides an open system for any UCSF-affiliated researcher, including faculty, postdocs, and students, to upload, describe, and share datasets, which are then accessible to public users upon request.

Furthering the national movement to make scientific research data accessible to the public excites many members of the UCSF community. John Kealy, manager of Customer Communications for UCSF Information Technology Services, gained an early spot on the top of UCSF 2.0's online game's leaderboard for his bold idea about UCSF championing “open science.”