As we mark World Malaria Day this year, UCSF’s Global Health Group is celebrating the success of Namibia, where malaria case have dropped 98 percent over the past decade.

The deadly disease, caused by parasites that are transmitted from person to person by mosquitoes, is now found mostly in the northern regions of Namibia.

The National Vector-borne Disease Control Program (NVDCP) at the Namibia Ministry of Health and Social Services effectively controls the spread of malaria with interventions such as spraying dwellings with insecticides, distributing mosquito nets treated with insecticides, using malaria tests that can give accurate results within 15 minutes, and distributing medicines that kill the parasite.

To further this success, the UCSF Global Health Group’s Malaria Elimination Initiative is teaming up with the Multidisciplinary Research Centre at the University of Namibia (UNAM), the Novartis Foundation for Sustainable Development, the London School of Hygiene and Tropical Medicine, the Clinton Health Access Initiative, and others to research new strategies and interventions that the NVDCP can use to get rid of the remaining pockets of transmission and eliminate malaria by 2020. Members of this research partnership will be working together to strengthen the national malaria surveillance system, learn more about how to eliminate the remaining reservoirs of infection in the Zambezi region, and understand the risk factors that are associated with malaria transmission. 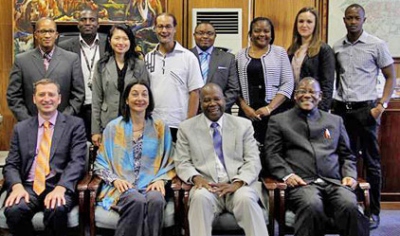 The steering committee of the malaria research partnership meets with the chancellor and vice chancellor of the University of Namibia. Photo courtesy of Novartis Foundation

Worldwide, an estimated 3.3 million lives have been saved since 2000 through stepped up malaria control and elimination efforts, according to the World Health Organization. Mortality rates have been cut almost in half.

In 2012, an estimated 207 million people got sick from malaria, and 627,000 of them died, mostly children under five in sub-Saharan Africa. In 2013, 97 countries had on-going malaria transmission.

The UCSF Global Health Group, UNAM and their partners have been working in Ohangwena and Omusati regions since 2012 to conduct similar research to understand malaria transmission.

Early results from initial studies show that people who become infected with malaria are more likely to be young males who have traveled recently to areas with more malaria, and those who live with or near people infected with malaria. Often these malaria-infected neighbors and household members do not show signs and symptoms because the number of parasites infecting them is very low. These “asymptomatic” individuals pose a new challenge for the NVDCP in achieving malaria elimination because they’re tough to identify.

To address these challenges, the NVDCP has implemented a new strategy called reactive case detection, which requires health staff to follow up on every case of malaria to determine where the infection came from, and whether it has spread to other people.

Starting in May 2014, UCSF, UNAM and partners will begin supporting the NVDCP in Zambezi to ensure that every malaria case is reported. Members of the research team will work alongside NVDCP staff to conduct reactive case detection and map each reported case with mobile technologies, to better understand where malaria occurs. This information will be used to help the NVDCP and its research partners to better understand malaria transmission patterns in Zambezi region, and ultimately select the most effective and efficient strategies to eliminate it.

This groundbreaking research is not only providing answers to vital questions for malaria elimination in Namibia, but is also generating knowledge that will be useful for other countries who seek to eliminate malaria.

The UCSF Global Health Group, part of UCSF Global Health Sciences, is an “action tank” dedicated to translating new approaches into large-scale action to improve the lives of millions of people. The Group’s Malaria Elimination Initiative provides research and advocacy support to countries moving towards an evidence-based path to malaria elimination.