It's an unlikely pairing: A public academic institution and a private company, joining forces to develop cutting-edge treatments for patients.

UC San Francisco is embarking on these partnerships to accelerate its research, while balancing the unique needs of both worlds.

Stanley Prusiner, MD, is used to overcoming challenges in his career.

In 1982, as a UCSF junior faculty member in the Department of Neurology, Prusiner published an article describing his discovery of an unprecedented class of pathogens that he named “prions.” These infectious proteins are now understood to be involved in numerous neurodegenerative diseases in humans and animals, including Alzheimer’s, Parkinson’s, frontotemporal dementia and Creutzfeldt-Jakob disease (CJD). 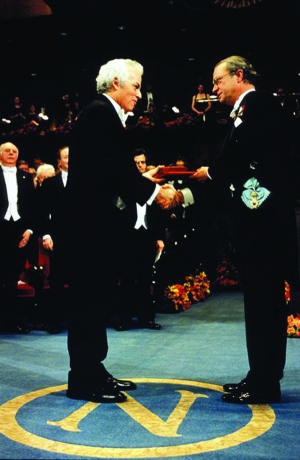 Stanley Prusiner, MD, receives the Nobel Prize in 1997 for his discovery of prions, which are now understood to be involved in numerous neurodegenerative diseases. Photo by Ulf Palm/Pica Pressfoto

The article sparked a firestorm at the time.

Prusiner’s contention that a protein alone could be infectious flew in the face of the commonly-held scientific belief that infections could only be transmitted by viruses, bacteria, fungi and parasites – all of which have genomes composed of either DNA or RNA. Proteins, however, are composed of amino acids.

Despite what he described as a “torrent of criticism” from the scientific community, the media and even funders of his research, Prusiner remained undeterred. He took comfort in the unwavering support of close colleagues, and mounting scientific evidence – much of it stemming his UCSF lab – that backed his claims.

The groundbreaking work led to Prusiner’s 1997 Nobel Prize in Physiology or Medicine.

“People often ask me why I persisted in doing research on a subject that was so controversial,” Prusiner said in his Nobel acceptance speech. “I frequently respond by telling them that only a few scientists are granted the great fortune to pursue topics that are so new and different that only a small number of people can grasp [their] meaning initially.”

Accelerating the Push Toward Answers

In the decades since his discovery, Prusiner – now director of the Institute for Neurodegenerative Diseases (IND) at UCSF – has been committed to getting answers about prion diseases, and ultimately treatments and cures.

Even with a Nobel Prize under his belt, the road continues to pose challenges.

Federal funding from the National Institutes of Health (NIH) has been crucial to his research, but the recent recession – and resulting sequestration – highlighted the need to strengthen relationships with private industry. In 2013, the NIH awarded a total of $22.5 billion in funding to U.S. institutions, the lowest amount since 2003. 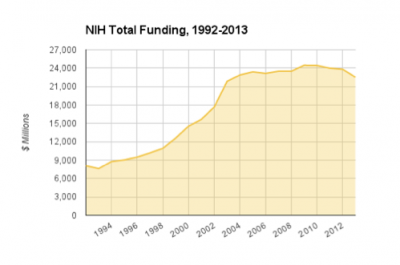 Overall funding by the National Institutes of Health has stagnated in recent years. Click on the chart to view a larger version, or click here to read more about NIH funding to UCSF.

But this month, Prusiner’s work got a huge boost from a new collaboration between the IND and the Japan-based global pharmaceutical company Daiichi Sankyo Co., Ltd. It will focus on developing therapeutics and molecular diagnostics for multiple neurodegenerative diseases.

“Alzheimer’s alone kills as many people every year as cancer does, but it only receives one-tenth of the funding that we dedicate to cancer research. This collaboration won’t fill that funding gap, but it will offer the tremendous value of Daiichi Sankyo’s scientific expertise to make progress on these diseases,” he said.

Prusiner welcomes the availability of Daiichi Sankyo’s “tremendous” chemical library and drug discovery expertise, as well as the company’s recognition that each prion – whether linked to Alzheimer’s, Parkinson’s or CJD – likely will require its own pharmaceutical cocktail. “Daiichi Sankyo really saw this as a new class of drugs,” he says. “They wanted to embrace the big picture.”

Asked how the collaboration will enhance his research capabilities, Prusiner doesn’t hesitate: “This is the key; this is everything.”

Combining Strengths of Both Worlds

Industry partnerships benefit both parties tremendously by supplying what the other side may be lacking. 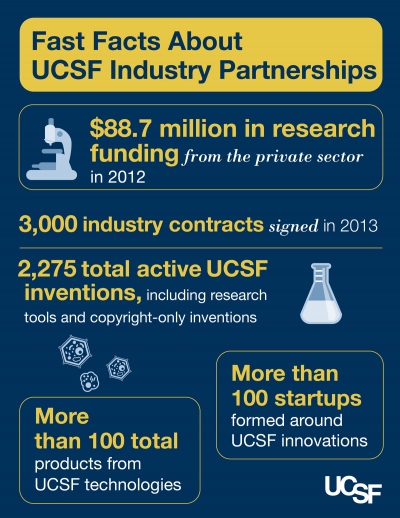 Click on the image to view a larger version.

For companies, they provide an opportunity to tap into early-stage academic innovation – research that in many cases is already going on in a lab like Prusiner’s. For UCSF, they offer a chance to take advantage of industry's expertise in product development and commercialization.

The Daiichi Sankyo partnership is just the latest example.

The University signs roughly 3,000 industry contracts every year, and research funding from the private sector nearly tripled between 2001 and 2012 – from $33.3 million to $88.7 million – as UCSF’s research enterprise doubled to $1 billion in total funding.

UCSF Vice Chancellor for Research Keith Yamamoto, PhD, describes the partnerships as more than collaborations. They are creating a “single enterprise,” he said, a “continuum” that takes innovative research and puts it into practice.

“At UCSF, we aim to discover knowledge and treat patients, while companies have a pact with their shareholders to make a profit,” Yamamoto said. “These are two very different missions, and that presents a big challenge, but it’s one that we think will be well worth it in terms of the potential payoff.”

Often, the kind of work being done by UCSF with its industry partners isn’t happening anywhere else – and couldn’t happen anywhere else. 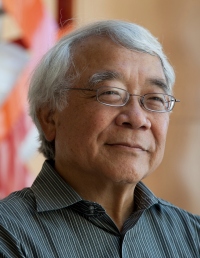 In 2009, for example, the University partnered with global health care company Abbott to launch a first-of-its-kind, nonprofit viral diagnostics center to help identify unknown viruses from around the world. The UCSF Viral Diagnostics and Discovery Center’s work is based on the ViroChip, a screening technology developed by UCSF professors Joe DeRisi, PhD, and Donald Ganem, MD, that was first used in the 2003 identification of the virus causing Severe Acute Respiratory Syndrome, or SARS.

“Companies clearly see the value of being embedded with us,” Yamamoto said.

UCSF is tackling some of the world’s biggest health problems by leveraging the resources and expertise of private industry. Here is a look at some major collaborations:

Digital Health
The UCSF-Samsung Digital Health Innovation Lab is a first-of-its-kind test bed where entrepreneurs and innovators will be able to validate their mobile health technologies and accelerate the adoption of new preventive health solutions. Read More

Therapeutic Discovery and Development
A partnership with Pfizer’s Center for Therapeutic Innovation has created an open network of researchers designed to substantially reduce the time required to translate promising biomedical research into new medications and therapies – a process otherwise estimated to take more than 15 years and $1 billion per drug. Read More

Infectious Diseases
The UCSF Viral Diagnostics and Discovery Center is a collaboration with Abbott that launched a first-of-its kind, nonprofit center to help identify unknown viruses from around the world. Read More

To establish these partnerships, ITA builds a team with business development, contracting, intellectual property and financial structuring expertise to shape and put into place the overall alliance.

In the past year alone, ITA has established several broad partnerships that already support new projects in 23 UCSF laboratories.

The teams work hard to structure deals that protect the UCSF faculty’s intellectual property as well as their academic freedom so they can publish their work. “It’s a hugely complex process, but it’s crucial to our faculty and to UCSF as a top research university to maintain academic integrity,” Kiriakis said. “To do that legally and thoughtfully is very important.”

Once the partnership is in place, Stephanie Robertson, PhD, ITA’s senior director of Strategic Alliances, and her team continue to play a role by engaging in the kind of “alliance management” more commonly found in the private sector than at a major university.

“Under these partnerships, the overall goals of both the partner and our scientists are aligned. However, the cultures and metrics of industry and academia are quite different,” Robertson said. “The role of alliance management in bridging and managing the relationships in these big, complex partnerships is key to success and ultimately, growth of the alliance.”

ITA is not the only place on campus looking at developing creative solutions with the private sector.

The California Institute for Quantitative Biosciences (QB3) and the Clinical and Translational Sciences Institute (CTSI) also engage partners to help researchers efficiently get their health care innovations to market, and ITA teams work closely with these groups to ensure they can structure and negotiate the deals in a mutually beneficial way.

For example, QB3 and Pfizer have worked together since 2008 as strategic partners in an effort to engage UC faculty and Pfizer scientists in collaborative research and development opportunities. More than 25 such collaborations have been funded so far under this alliance.

In another example, CTSI recently spearheaded a novel partnership with Quest Diagnostics that will focus on advancing precision medicine, an emerging field of medical science that aims to harness molecular, clinical, population and other data to better diagnose and target treatment for diseases.

Kiriakis has seen a real increase in awareness of the benefits of industry collaborations in recent years, noting that in more and more instances, UCSF researchers are initiating the conversations.

“Academia and industry need each other,” he said. “Ultimately it’s all about getting effective therapies into the hands of patients and improving health. Teaming up with the private sector has proven to be one of the fastest ways to get from bench to bedside.”