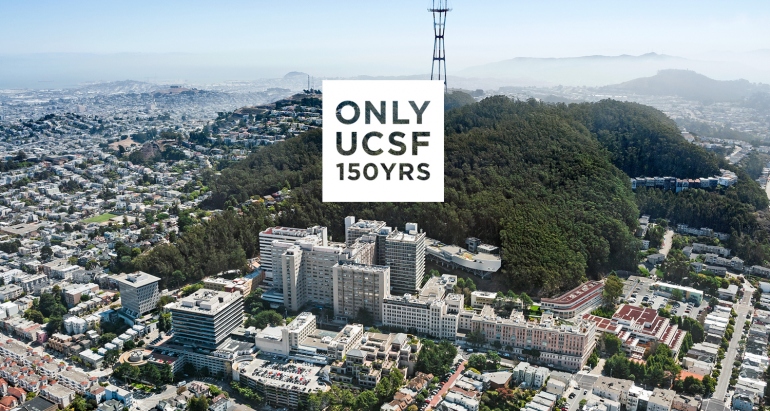 Hugh Toland joined a California-bound wagon train in 1852 with visions of striking it rich in the Gold Rush.

It only took a few months before the South Carolina surgeon abandoned prospecting, seeing a better opportunity in providing health care to a raucous and booming San Francisco. By 1864, Toland Medical College was born, and less than a decade later, it became the “medical department” of a fledgling University of California.

Dive into UCSF's rich history and promise for the future through an interactive timeline, profiles, and infographics on the 150th Anniversary website. 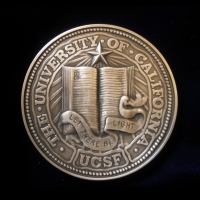 The 150th Anniversary celebrations officially launch April 10 on Founders Day. Read more about the event, including the awarding of the 2014 UCSF Medals – the University's highest honor.

Though Toland might not have found the exact fortune he was seeking out West, he left a legacy that has enriched future generations in ways far greater than he could have imagined.

Today UC San Francisco is one of the top health sciences universities, encompasses more than 20 locations throughout San Francisco and is leading a charge to advance health worldwide. From its humble beginnings in the Wild West to this year’s 150th anniversary celebration, UCSF has been a testament to how the best research, the best education and the best patient care can converge to create life-changing breakthroughs.

UCSF’s sesquicentennial, which officially launches on Founders Day on April 10 and continues through May 2015, will be a yearlong celebration filled with special events on campus and in the community.

While anniversaries are a time to look back at accomplishments, the goal of this celebration also will be to recognize that UCSF has always been focused on the future, says Mary Anne Koda-Kimble, PharmD, chair of the 150th Celebration Committee and dean emeritus of the UCSF School of Pharmacy.

“The culture of the place is about excellence, moving forward, and seeking new frontiers,” she says.

Koda-Kimble has spent most of her life at UCSF, graduating from the School of Pharmacy in 1969 and joining the faculty the following year. She has lived through historic changes in health sciences education, research and care, seeing the University weather budget woes, develop highly ranked graduate and professional programs, and support faculty who’ve been recognized with top awards including five Nobel Prizes.

“It’s a transformational institution,” Koda-Kimble says. “The culture here is one of public service. We create, we provide the best care, and we educate the best students with the idea that they will in turn use their discoveries and their education to give back to society.” 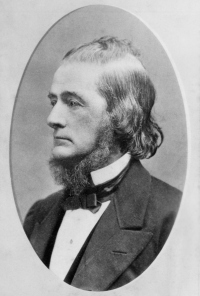 Hugh Toland, founder of the medical school that would become UCSF

To mark the sesquicentennial, the UCSF Library is reaching into its vault to showcase the University’s rich history online and in a series of exhibits that will be announced later this year.

Polina Ilieva, head of the library's archives and special collections, says the challenge has been how to choose from among its thousands of artifacts, photographs and manuscripts how to best represent the breadth of innovation at UCSF over the past 150 years.

“We have the original address by Toland as he opened the medical college in 1864, and we have some of his personal medical instruments,” she says. “We have the microscope that was used by Lucy Wanzer, the first woman who graduated from Toland Medical College, so this is definitely something we will be using.”

A major theme of the celebrations also will be looking ahead to new UCSF milestones over the next year, including the opening of the Mission Bay hospitals, and UCSF’s promise for decades to come.

“In my 32 years at UCSF, I’ve witnessed remarkable growth and innovation that has brought us to the leading edge of health care, research and education,” says UCSF Interim Chancellor Sam Hawgood, MBBS.

“Our curriculum is evolving to better prepare our students for the complexities of 21st century medicine and to take advantage of the breakthroughs in fundamental biomedical science. In research, precision medicine, genomics, stem cell technology and other advances have the promise to change the face of medicine. And our health system is focusing on the highest value family-centered care and exceptional outcomes with an unmatched intensity,” Hawgood says.

“I can’t foresee what UCSF is going to look like 32 years from now – much less in another 150 years – but I do know that our past has prepared us well to lead the next revolutions in health.”

UCSF is marking its sesquicentennial with a series of special events while also incorporating the anniversary theme into its annual milestones.

The following is a preview of the planned 2014 events. Check the 150th Anniversary website for the most up-to-date event information throughout the year.