In an innovative clinical trial led by UC San Francisco, the experimental drug neratinib along with standard chemotherapy was found to be a beneficial treatment for some women with newly diagnosed, high-risk breast cancer.

Additionally, researchers learned that an algorithm used in the adaptive, randomized trial known as I-SPY 2 was highly effective at predicting the success of the treatment regimen in the patients who have HER2-positive/HR-negative disease.

The finding marks the second drug “graduation” within the I-SPY 2 trial model, which is designed to accelerate drug development and to reduce the costs of bringing safe and effective new drugs to market.

The phase 2 data was presented in San Diego at the annual meeting of the American Association for Cancer Research (AACR), a premier gathering of scientists presenting cutting edge cancer research.

Launched by UCSF in tandem with a private-public partnership, I-SPY 2 combines personalized medicine with a novel investigational design. Its goals are to improve the efficiency of clinical trials and to streamline the process for developing new drugs and regimens where they are most urgently needed. 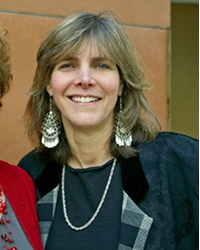 “What is so exciting about the graduations is that we’re proving unconditionally that the standing trial mechanism can efficiently evaluate multiple drugs and identify the specific populations for which the agents are most effective,” said Laura Esserman, MD, MBA, professor of surgery and director of the Carol Franc Buck Breast Care Center at the UCSF Helen Diller Family Comprehensive Cancer Center.

Esserman is the co-principal investigator of I-SPY 2, which is underway at 20 cancer research centers in the United States and Canada.

“We are testing the agents in high-risk patients at a time in their disease (primary breast cancer) when we are most likely to make a difference in survival,” Esserman said. “This was the promise of I-SPY 2. It’s what we’ve been waiting to see. As drugs move through the confirmation process, we should be able to accelerate availability of successful agents, see few failures in phase 3 cancer trials, and have better options for women.”

Currently, it takes more than $1 billion, a dozen years and thousands of patient volunteers for a single drug to advance to market. Under the I-SPY 2 model, the costs, time and number of patients required to safely test a drug would be reduced by more than a third.

One of the innovations of the trial involves a reversal in the order of traditional therapy: surgery to remove tumors is not undertaken until after the drug treatment is completed. As a result, the response of the tumor to new therapies becomes critical evidence in gauging whether a drug is effective.

Another distinctive feature of the trial is that it screens multiple drugs from multiple companies, allowing the researchers to “graduate,” drop and add drugs seamlessly throughout the course of the trial without requiring Food and Drug Administration approval for a new protocol. Consequently, the time it takes to move from one drug to another in the trial is significantly shortened.

To date, seven agents have been incorporated, two have graduated and a couple more are being prepared to enter the trial.

According to the findings presented at the AACR meeting, the algorithm randomly assigned 115 patients to the branch of the trial that contained neratinib. The results were compared with those of 78 patients who were concurrently randomized to a control arm containing standard chemotherapy.

The trial’s “adaptive randomization” successfully identified HER2+/HR- as the drug’s biomarker signature. It also identified two other signatures, all HER2 and MP+ tumors that might also benefit from the regimen.

Neratinib is in development at Puma Biotechnology, Inc. for the treatment of early and late-stage breast cancer and under consideration for the I-SPY 3 Phase 3 trial.

“I-SPY 2 evaluates investigational regimens in patient subsets specifically defined on the basis of molecular characteristics, in order to determine whether or not adding these agents in the neoadjuvant setting is better than standard therapy alone,” said trial investigator and first author John W. Park, MD, professor of medicine at the UCSF Helen Diller Family Comprehensive Cancer Center.

The I-SPY 2 partnership includes the FDA, the Foundation of the National Institutes of Health, QuantumLeap Healthcare Collaborative, pharmaceutical companies and academic medical centers.