Whether you’re a Major League outfielder chasing down a hard-hit ball or a lesser mortal navigating a busy city sidewalk, it pays to keep a close watch on your surroundings when walking or running. Now, new research by UC San Francisco neuroscientists suggests that the body may get help in these fast-changing situations from a specialized brain circuit that causes visual system neurons to fire more strongly during locomotion. 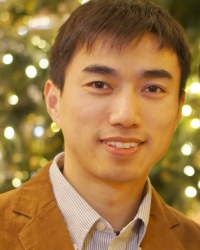 There has been a great deal of research on changes among different brain states during sleep, but the new findings, reported in the March 13 issue of Cell, provide a compelling example of a change in state in the awake brain.

It has long been known that nerve cells in the visual system fire more strongly when we pay close attention to objects than when we view scenes more passively. But the new research, led by Yu Fu, PhD, a postdoctoral fellow in the UCSF lab of senior author Michael P. Stryker, PhD, the W.F. Ganong Professor of Physiology, breaks new ground, mapping out a visual system amplifier that is directly activated by walking or running.

Though this circuit has not yet been shown to exist in humans, Stryker is designing experiments to find out if it does. He said he would be surprised if his group did not identify a similar mechanism in people, since such systems have been found in fruit flies, and the mouse visual system has so far proved to be a good model of many aspects of human vision. 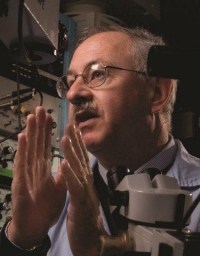 “The sense of touch only tells you about objects that are close, and the auditory system is generally not as sensitive as the visual system to the exact position of objects,” he said. “It seems that it would be generally useful to have vision – the sensory modality that tells you the most about things that are far away – work better as you’re moving through the world.”

Stryker said that the neural system identified in the new work may have evolved to conserve energy, by allowing the brain to operate at less than peak efficiency in less demanding behavioral situations. “When you don’t need your visual system to be in a high-gain state, your brain may use a lot less energy in responding,” said Stryker. “A change in gain when you’re moving is ideally what you’d like to see – the neuron is doing the same thing that it’s always doing, but it’s talking louder to the rest of the brain.”

In the new research, mice were allowed to walk or run freely on a Styrofoam ball suspended on an air cushion while the scientists used a technique known as two-photon imaging to monitor the activation of cells in the primary visual area of the brain, known as V1.

The researchers found that a subset of V1 neurons, those that contain a substance called vasoactive intestinal peptide (VIP), were robustly activated in a time-locked fashion purely by locomotion, even in darkness, while other V1 neurons remained largely silent.

The mice were presented with visual stimuli both while motionless and while moving, and measurements showed that walking could increase the response of V1 neurons by more than 30 percent. Moreover, V1 responses to these stimuli increased or declined in tandem with the activity of VIP neurons, and with the starting or stopping of walking by the mice.

To firmly establish that VIP neurons were responsible for these changes, the researchers used optogenetic techniques, inserting light-sensitive proteins exclusively into VIP neurons. Using light to stimulate just this population of cells, the team found that they could emulate the effects of locomotion – when VIP cells were activated, V1 cells responded more strongly to stimuli, regardless of whether the animals were moving. Conversely, when the researchers specifically targeted and disabled VIP cells, locomotion-induced increases in the response of other V1 cells were abolished.

Postdoctoral fellows J. Sebastian Espinosa, PhD, Daniel P. Darcy, PhD (now a staff scientist at Dolby Labs), and Nengyin Sheng, PhD, as well as Roger P. Nicoll, MD, professor of cellular and molecular pharmacology, participated in the research. They were joined by Jason M. Tucciarone, an MD/PhD student at Stony Brook University, and Z. Josh Huang, PhD, of Cold Spring Harbor Laboratories. The work was supported by a grant from the National Institutes of Health.