How does an autistic child take in information when he sits in a classroom abuzz with social activity? How long does it take someone with multiple sclerosis, which slows activity in the brain, to process the light bouncing off the windshield while she drives?

Until recently, the answers to basic questions of how diseases affect the brain – much less the ways to treat them – were lost to the limitations on how scientists could study brain function under real-world conditions. Most technology immobilized subjects inside big, noisy machines or tethered them to computers that made it impossible to simulate what it’s really like to live and interact in a complex world. 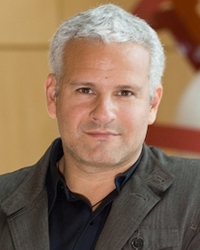 But now UC San Francisco neuroscientist Adam Gazzaley, MD, PhD, is hoping to paint a fuller picture of what is happening in the minds and bodies of those suffering from brain disease with his new lab, Neuroscape, which bridges the worlds of neuroscience and high-tech.

In the Neuroscape lab, wireless and mobile technologies set research participants free to move around and interact inside 3-D environments, while scientists make functional recordings with an array of technologies. Gazzaley hopes this will bring his field closer to understanding how complex neurological and psychiatric diseases really work and help doctors like him repurpose technologies built for fitness or fun into targeted therapies for their patients. 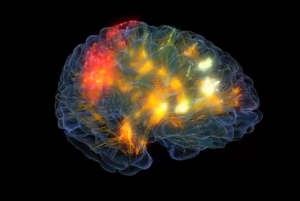 As a demonstration of what Neuroscape can do, Gazzaley’s team created new imaging technology that he calls GlassBrain, in collaboration with the Swartz Center at UC San Diego and Nvidia, which makes high-end computational computer chips. GlassBrain creates vivid, color visualizations of the structures of the brain and the white matter that connects them, as they pulse with electrical activity in real time.

These brain waves are recorded through electroencephalography (EEG), which measures electrical potentials on the scalp. Ordinary EEG recordings look like wavy horizontal lines, but GlassBrain turns the data into bursts of rhythmic activity that speed along golden spaghetti-like connections threading through a glowing, multi-colored glass-like image of a brain. Gazzaley is now looking at how to feed this information back to his subjects, for example by using the data from real-time EEG to make video games that adapt as people play them to selectively challenge weak brain processes.

Gazzaley has already used the technology to image the brain of former Grateful Dead drummer Mickey Hart as he plays a hypnotic, electronic beat on a Roland digital percussion device with NeuroDrummer, a game the Gazzaley Lab is designing to enhance brain function through rhythmic training. Hart, whose brain is healthy, is collaborating with Gazzaley to develop the game and performed on NeuroDrummer while immersed in virtual reality on an Oculus Rift at the Neuroscape lab opening on March 5.

The Neuroscape lab will be available to all UCSF researchers who study the brain. And Gazzaley ultimately hopes it will aid in the development of therapies to treat diseases as various as Alzheimer’s, post-traumatic stress disorder, attention deficit and hyperactivity disorder, schizophrenia, autism, depression and multiple sclerosis.