A group of five UC San Francisco graduate students and a postdoctoral scholar won a national video competition called “Stand Up for Science" to convey the importance of basic science research.

The objective laid out by the Federation of American Societies for Experimental Biology (FASEB) was to create a short video that demonstrated the importance of the federal government’s investment in biomedical and biological research in an engaging and creative way. 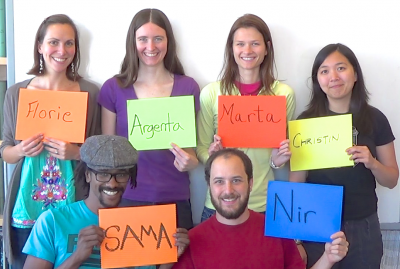 “When we found out we won, we were all extremely proud and happy,” Oksenberg said. “We have received great feedback and support from colleagues and friends. It was really nice to hear people telling us that they enjoyed watching our video.”

The idea to create a video came about several months ago when the group met for coffee at Terzetto's, located on the Mission Bay campus. They were trying to figure out a project they could do to help educate the general public about basic science. 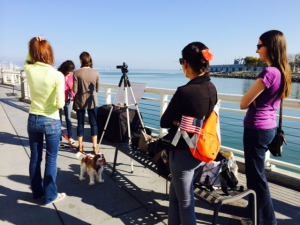 Team members set up near AT&T Park to film the opening portion of their video.

Charles suggested they make a video for the FASEB contest. The team was quickly on board because, by chance, many of the members are multimedia experts. Charles has experience with filming and producing white board videos through her Youreka Science project. Ahmed has a science radio show called “Carry the One.” And Wegorzewska is involved in communicating science to a lay audience through her blog checked-BY-science.

“It was very easy to identify everyone's roles based on their expertise and interest,” Charles said. “We're a pretty good group, and this was truly a team effort.”

They had a couple of brainstorming sessions, came up with the script and spent an entire Saturday filming, as well as taking turns drawing the white board images created for the FASEB contest. Charles edited the video, and Ahmed provided voiceover narration.

In the video, they cast a wide net by asking random passersby in San Francisco to hypothetically transport themselves back to the year 1960 and make a choice to help fund either an affordable treatment for diabetes or basic research that explores how bacteria protect themselves. 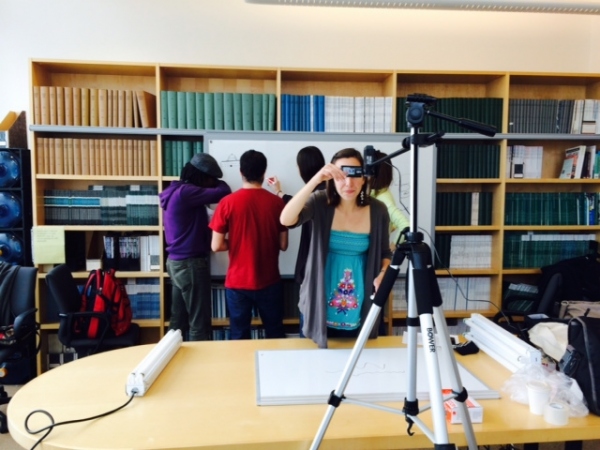 Florie Charles gets the camera ready for the white board portion of the video.

The majority opted for the tangible option of treating diabetes, and the video demonstrated that studying bacteria’s defense mechanisms – which the federal government actually funded in 1960 – led to revolutionary techniques of gene splicing, which then led to advancements in treatment of major diseases such as cancer, stroke and HIV. Our understanding of DNA fingerprinting, growth hormones and biofuels are all the direct result of studying bacteria.

The point of the video is that these advancements would not have been possible without federal funding.

“I was glad that our message stood out amongst the rest of the videos,” Charles said. “Basic research is important and there is hope for the future of biomedical research to make important discoveries from seemingly unimportant questions.”

The UCSF team won $5,000 for its first-place video. The winnng entry as well the runners-up can be found on FASEB's website.