A cure for type 1 diabetes has long eluded even the top experts. Not because they do not know what must be done — but because the tools did not exist to do it.

But now scientists in the laboratory of Gladstone Institutes’ Investigator Sheng Ding, MD, PhD, harnessing the power of regenerative medicine, have developed a technique in animal models that could replenish the very cells destroyed by the disease.

The team’s findings, published online Thursday in the journal Cell Stem Cell, are an important step towards freeing patients from the life-long injections that characterize this devastating disease. 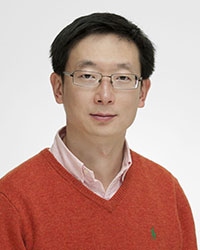 Type 1 diabetes, which usually manifests during childhood, is caused by the destruction of beta-cells (ß-cells). ß-cells are a type of cell that normally resides in the pancreas and produces a hormone called insulin. Without insulin, the body’s organs have difficulty absorbing sugars, such as glucose, from the blood. Once a death sentence, the disease can now be managed with regular glucose monitoring and insulin injections. A more permanent solution, however, would be to replace the missing ß-cells. But these cells are hard to come by, so researchers have looked towards stem cell technology as a way to make them.

“The power of regenerative medicine is that it can potentially provide an unlimited source of functional, insulin-producing ß-cells that can then be transplanted into the patient,” said Ding, who is also a professor at UC San Francisco, with which Gladstone is affiliated. “But previous attempts to produce large quantities of healthy ß-cells — and to develop a workable delivery system — have not been entirely successful. So we took a somewhat different approach.”

One of the major challenges to generating large quantities of ß-cells is that these cells have limited regenerative ability; once they mature it’s difficult to make more. So the team decided to go one step backwards in the life cycle of the cell.

The team first collected skin cells, called fibroblasts, from laboratory mice. Then, by treating the fibroblasts with a unique ‘cocktail’ of molecules and reprogramming factors, they transformed the cells into endoderm-like cells. Endoderm cells are a type of cell found in the early embryo, and which eventually mature into the body’s major organs — including the pancreas, the home of ß-cells.

“Using another chemical cocktail, we then transformed these endoderm-like cells into cells that mimicked early pancreas-like cells, which we called PPLC’s,” said Gladstone Postdoctoral Scholar Ke Li, PhD, the paper’s lead author. “Our initial goal was to see whether we could coax these PPLC’s to mature into cells that, like ß-cells, respond to the correct chemical signals and — most importantly — secrete insulin. And our initial experiments, performed in a petri dish, revealed that they did.”

The research team then wanted to see whether the same would occur in live animal models. So they transplanted PPLC’s into mice modified to have hyperglycemia (high glucose levels), a key indicator of diabetes.

“Importantly, just one week post-transplant, the animals’ glucose levels started to decrease, and gradually approached normal levels,” continued Li. “And when we removed the transplanted cells, we saw an immediate glucose spike, revealing a direct link between the transplantation of the PPLC’s and reduced hyperglycemia.”

But it was when the team tested the mice eight weeks post-transplant that they saw more dramatic changes: the PPLC’s had given rise to functional, insulin-secreting ß-cells.

“These results not only highlight the power of small molecules in cellular reprogramming, and are proof-of-principle that could one day be used as a personalized therapeutic approach in patients,” explained Ding.

“I am particularly excited about the prospect of translating these findings to the human system,” said Matthias Hebrok, PhD, the Hurlbut-Johnson Distinguished Professor of Diabetes Research, who is one of the study’s authors and director of the UCSF Diabetes Center. “Most immediately, this technology in human cells could significantly advance our understanding of how inherent defects in ß-cells result in diabetes, bringing us notably closer to a much-needed cure.”