UC San Francisco has been awarded a Bill & Melinda Gates Foundation grant of $2.7 million over three years for a collaborative project aimed at reducing premature births.

The funding will allow the UCSF team to continue to pursue development of the Smart Diaphragm, a wireless monitoring and warning system for early signs of preterm birth. 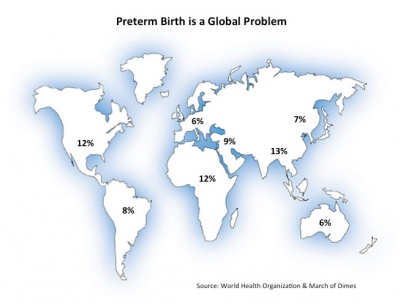 Click on the image to see a larger version.

Globally, about 15 million babies are born prematurely, according to the World Health Organization, leading to death or lifetime disabilities. It is the leading cause of infant mortality worldwide, amounting to more than one million deaths annually. Preterm birth also poses an enormous medical cost to society, exceeding $26 billion annually in the United States alone, according to estimates from the Institute of Medicine.

Yet, when detected early and treated, preterm labor can be prevented or delayed.

“Labor is a long and mostly silent cascade of events that culminates with the uterus trying to expel the fetus,” said principal investigator Larry Rand, MD, who holds the Lynne and Marc Benioff Endowed Chair in Maternal Fetal Medicine at UCSF.

“One key silent event is the transformation of the cervix,” Rand said. “Throughout most of pregnancy it is a long, tough, protective barrier at the opening of the uterus. When labor approaches, the cervix begins to soften, shorten and thin out, before becoming an open gateway for the baby to enter our world.” 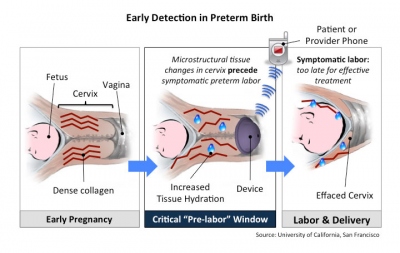 Click on the image to see a larger version.

“The ability to remotely detect cervical changes without an exam or imaging is a breakthrough for women all over the world,” Rand said. “Cervical length is currently measured using ultrasound, and when a cervix is found to be short, treating with progesterone will prevent 40 percent of ensuing preterm births. Unfortunately, ultrasound is not an option for most women in low and middle income settings globally, given the expense and expertise necessary.”

“Measuring microscopic precursors to labor in the cervix and tracking these changes across pregnancy could fundamentally change the way we think about preterm birth,” said Shuvo Roy, PhD, co-principal investigator and professor of bioengineering at UCSF.

“Knowing preterm birth is imminent while a woman is asymptomatic opens a new window of opportunity for therapeutics,” Roy said. “Drugs and interventions that are used now late in labor could yield more success if they are applied sooner. Earlier knowledge of preterm birth could also spur research and development of new therapeutics targeting this pre-labor window.”

Clinical Testing and Beyond

With this new phase of funding, the team will expand testing to more sites, including rural locations in South Africa, and miniaturize the device further to more closely resemble a pessary, which effectively “lifts” the cervix further away from the vaginal bacteria that appear to play a role in preterm birth in some women. Ultimately, the future device will be a “smart pessary,” said the researchers. 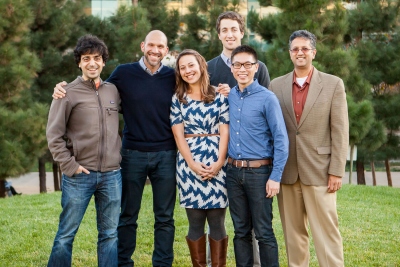 Mozziyar Etemadi, PhD, one of Roy’s recently graduated students and currently a postdoctoral scholar jointly appointed between UCSF and UC Berkeley, is also a co-principal investigator in the project. He credits successes thus far to the project’s “trainee-driven” nature and deep collaboration between clinical and scientific departments.

“Progress accelerated once former UC Berkeley-UCSF Masters in Translational Medicine students Philip Chung and Alex Heller joined me in this project to solve engineering challenges,” said Etemadi. “We challenged many notions in both OB/GYN and engineering, which has led to the incorporation of many ‘out of the box’ ideas that neither discipline alone could have reached.”

More information on the project can be found on the Smart Diaphragm website.