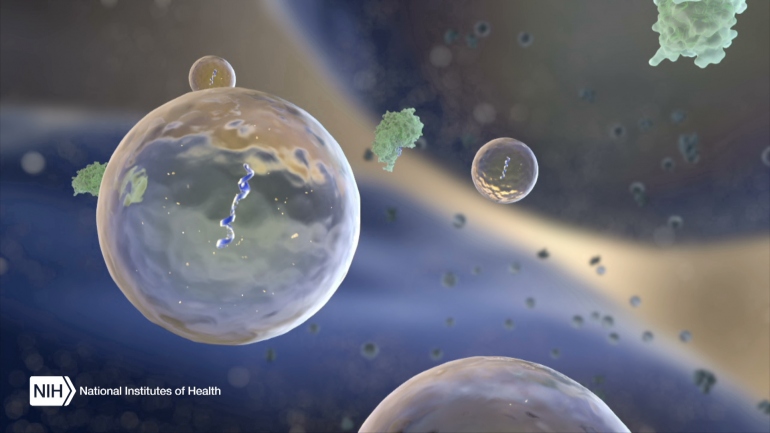 But it turns out that RNA is not merely an essential and reliable, if unexciting, workhorse. Scientists have discovered a type of RNA that ventures beyond the cell, travels through the bloodstream and could play a vital role in facilitating communication with other cells.

There’s still much to be learned about so-called extracellular RNA (exRNA), including what exactly it does and how much power it has to direct or disrupt physiological processes throughout the body. The potential, however, could be enormous: What if testing a person’s exRNA sample, like a blood test, could diagnose his or her disease earlier and more accurately? What if exRNA could be programmed and sent throughout the body to instruct diseased cells to become healthy again?

Scientists are jumping on the search for answers, fueled by $17 million in new targeted funding from the National Institutes of Health (NIH). Last August, the NIH announced funding for 24 projects, including two from UC San Francisco that seek to better understand basic exRNA biology.

“We don’t know much yet about this new family of exRNAs. But they appear to play both protective and pathogenic roles in health,” NIH Director Francis Collins, MD, PhD, wrote shortly before the funding announcement.

We don’t know much yet about this new family of exRNAs. But they appear to play both protective and pathogenic roles in health.

Francis Collins, director of the National Institutes of Health

Since then, the NIH has made additional awards to advance this new research field. The agency aims to fund the creation of shared databases that catalog all the exRNAs found in the body, as well as their targets – in tissues including blood, saliva, urine, semen, breast milk, amniotic fluid and cerebrospinal fluid. Another goal is to marry this data with clinical research to find associations between exRNA and disease.

“Extracellular RNA is the most recent, and one of the most surprising and potentially far-reaching elements of the RNA world to be uncovered over the past three or so decades,” said Keith Yamamoto, PhD, vice chancellor for research at UCSF.

ExRNA’s Role as Biomarker and Beyond

Like its cousin DNA, RNA can exist in a near-infinite number of distinct sequences formed by linked nucleic-acid building blocks. This allows for great specificity – different RNA molecules can have different interactions and effects.

Studies in mice, for instance, showed that human liver stem cells could send out exRNAs to liver cancer cells, which then entered the cancerous cells and killed them. But studies of cells maintained in a lab dish also demonstrated that tumor cells could fight back with their own exRNA. 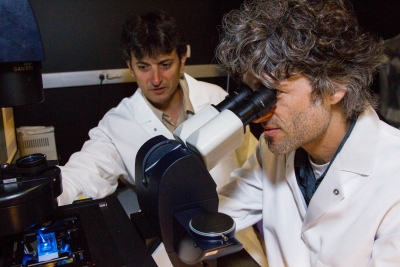 Robert Blelloch, MD, PhD, left, Michael McManus, PhD, look at mouse prostate cancer tissue under a microscope in their lab. Both have received NIH funding to investigate the potential for extracellular RNA, or exRNA, to help diagnose and treat diseases, including prostate cancer. Photo by Susan Merrell

And it has been proposed that extracellular RNA not only travels between cells within a single individual, but that it also can travel between organisms – through digestion of foods, for example. Some scientists wonder whether exRNA secreted by bacteria in our guts might affect metabolism, immune responses, obesity and gastrointestinal ailments.

Although exRNA is clearly in the human bloodstream and scientists are getting better at detecting it, UCSF microbiologist Michael McManus, PhD, is surprisingly agnostic about extracellular RNA’s importance in communication between cells.

“Whether extracellular RNA actually plays important roles in human physiology has not been convincingly demonstrated,” said McManus, an associate professor in the Department of Microbiology and Immunology and a principal investigator on one of the NIH grants.

An alternate explanation for the presence of exRNA: “It’s possible that cells that are diseased and dying could be emptying their contents into the bloodstream, and the body might just be clearing them,” he said.

To find out, McManus has developed a new technique for doing efficient experiments to determine whether or not exRNA is getting into cells and switching genes on or off – a molecular means of determining whether exRNA has any physiological effects.

McManus’ group has teamed up with labs led by two of the world’s pioneering experts on exRNA: Craig Hunter, PhD, of Harvard University, whose studies of the nematode worm C. elegans led to the identification of proteins on the cell surface that allow entry of exRNA; and Olivier Voinnet, PhD, chair of RNA biology at the Swiss Federal Institute of Technology in Zurich, who was the first to discover that RNA could act as systemic signal in plants. Voinnet also leads research to identify any exRNA in milk that may have biological effects.

The researchers will apply their expertise to a new mouse model being developed by McManus. “Our system will prove definitively whether exRNA is active in mice and will set the foundation for further exRNA exploration,” he said.

Even if exRNA does not prove to be a major player in shaping human physiology, “there is a good chance that exRNA could be a really powerful biomarker to identify and characterize disease,” McManus said.

That could be key to more accurately diagnosing and treating patients, according to Yamamoto, adding that “the exRNA program at UCSF will be an integral part of precision medicine.”

In precision medicine, biological and clinical data from patients are collected and anonymously pooled into shared databases that provide researchers with the information and statistical power to make new discoveries about diseases and to refine disease classification. Such discoveries are expected to lead to improved treatments tailored for patients, based on their individual biology and disease characteristics.

Understanding exRNA Functions Throughout the Body

A second team of UCSF researchers, led by stem cell scientist Robert Blelloch, PhD, will use the NIH funding to explore the role of secreted exRNA to try to identify unifying mechanisms across tissues – including the immune system, the liver, the prostate and the nervous system. 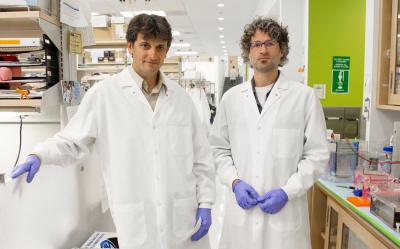 Robert Blelloch, MD, PhD, and Michael McManus, PhD, stand in their lab at the Eli and Edythe Broad Center of Regeneration Medicine and Stem Cell Research. Photo by Susan Merrell

“We expect to discover novel paradigms for extracellular RNA function and common underlying themes across organs, in systems of organs working together, and in animal models,” Blelloch said.

Blelloch himself is focusing on the prostate. He has identified RNA in blood that can serve as a biomarker of prostate cancer severity, but now aims to see if this exRNA is biologically active in tissue. “We expect these studies to reveal new roles for exRNA in driving prostate cancer progression,” he said.

Members of the team are focusing on other areas of the body:

“This concerted effort among the multiple investigators here at UCSF together with their international partners should bring clarity to an exciting, but currently messy burgeoning field," Blelloch said. "Being so new, it is high-risk science, but has the potential for having a great impact.”